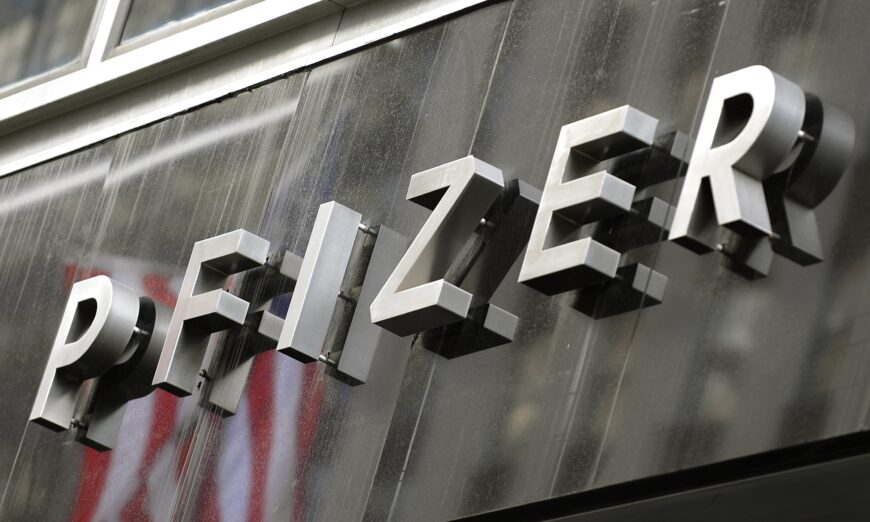 A sign for Pfizer is displayed in New York in a file photo. (Timothy A. Clary/AFP via Getty Images)

A trio of scientists at Pfizer were recorded speaking to undercover reporters about the existence of natural immunity to the virus that causes COVID-19, with one saying employees had been told not to discuss the protection publicly.

Natural immunity refers to the protection people enjoy against the CCP (Chinese Communist Party) virus after recovering from COVID-19.

“When somebody is naturally immune—like they got COVID—they probably have better, like not better, but more antibodies against the virus,” said Nick Carl, one of the scientists.

“So your antibodies are probably better at that point than the vaccination,” he added later.

Chris Croce, another scientist at Pfizer, told an undercover reporter that people are “probably more” protected by natural immunity when compared with vaccination.

“You’re protected most likely for longer since there was a natural response,” he said.

A third scientist who allegedly works for Pfizer, Rahul Khandke, said that employees have had to sit through many seminars where they’re told that getting the company’s vaccine is safer than getting COVID-19 and that they cannot discuss the differences in public.

“Logically though, if you have antibodies built up, you should be able to prove that you have those built up. I don’t know, potentially that doesn’t seem that crazy,” he said.

The scientists were speaking to undercover reporters from Project Veritas, a nonprofit reporting group.

Pfizer didn’t return an email or a voicemail seeking comment.

The company produces the most-used COVID-19 vaccine in the United States. More than 230 million doses have been administered as of Oct. 5. The federal government buys COVID-19 vaccines from Pfizer, Moderna, and Johnson & Johnson and provides them for free to Americans who get them. The companies have locked in more than $60 billion through 2022 and are poised to make billions more on booster shots.

More and more studies have been published displaying the potency of natural immunity, particularly in certain groups. Some experts say the evidence shows that natural immunity is similar to or better than vaccination. But federal officials and some other experts say practically everybody should get a vaccine, regardless of prior infection. They argue that the vaccines boost protection bestowed by recovery.

Executives at vaccine makers like Pfizer rarely if ever discuss natural immunity.

Croce works for Pfizer as a vaccine research and development scientist, according to an archived version of his Twitter account, which was deleted after the Project Veritas videos were released.

“I’m #pfizerproud to be part of a company that understands that helping patients is about more than medicine, it’s improving health literacy so that people don’t need a medical degree or a thesaurus to make the right healthcare decisions,” he wrote in one post.

Carl is a New York-based biochemist with Pfizer, according to his LinkedIn profile, which was taken offline after the videos were made public. He was listed as starting at the company in August. Carl declined to comment on the remarks he made in private to James O’Keefe, head of Project Veritas, when approached at a restaurant.

Verification of Khandke’s employment at Pfizer couldn’t be found.