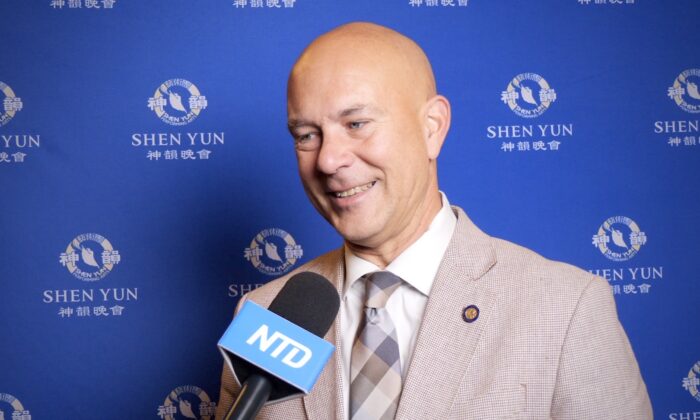 PITTSBURGH—Shen Yun Performing Arts touches the hearts of audiences around the world and some audience members show their gratitude in a special way.

Shen Yun is based in New York, and using classical Chinese dance and music, brings China’s 5,000 years of civilization back to life.

“I love the fact that it’s a movement you’re creating. That’s a double entendre there. You are, with your dance movement, but you’re creating another movement to show that we can have peace and unity through art,” Mr. Stefano said.

After the Communist Party of China came into power, Chinese culture went through a period of destruction and was all but lost. Despite Shen Yun’s efforts to revive Chinese culture, it is not able to perform in China today.

“I’m so impressed that you’re doing this to revive a culture and an art form, and pushing back against political pressure through arts and culture. I think it’s amazing. So that’s a great way to revitalize the past,” he added.

Also in the audience, that afternoon, was Pennsylvania State Senator Devlin Robinson, who expressed his recognition of Shen Yun’s truthful expression of China’s past and present.

“It goes to show you what people can do when they’re actually able to be free and express their feelings,” Mr. Robinson said.

He applauded the entire production, saying, “It did not disappoint. I loved everything from the costume design to the passion of the performers to the orchestra. It was everything was top-notch.”

Shen Yun’s dancers are trained in classical Chinese dance. This dance form is thousands of years old, with ties to martial arts as well as the artistry of traditional Chinese theater. The result is an expressive yet demanding art form.

“I’ve received the messages [that] hard work and dedication and a passion for what you love to do can sow the seeds of success in this performance,” Mr. Robinson said.

Jessica Benham is a Pennsylvania State Representative. Coming from a musical family, she gave her compliments to Shen Yun’s orchestra.

“The orchestra was lovely. To hear the combination of the Western and the Eastern instruments, beautiful harmonies, it was beautiful,” she said.

Shen Yun’s orchestra features a classic Western ensemble as the foundation while highlighting traditional Chinese instruments like the pipa, an ancient Chinese lute, and erhu, a two-stringed instrument. The orchestra in combination with the dancers on stage tells stories from China’s history and literature.

“I think, for me, it was the way that the story was told just with music and dance. That was gorgeous,” said Ms. Benham. “I don’t think anyone can watch a performance filled with that much emotion and not come away touched by it.”

Ms. Benham came to the performance to present “a proclamation on behalf of the Commonwealth of Pennsylvania to honor the cultural contribution by Shen Yun.”

Melvin Hubbard El is an advisor to Pittsburgh’s mayor. He shared his belief that everyone in Pennsylvania should come and see Shen Yun.

“Everybody across Pennsylvania should be here to see this today,” said Mr. Hubbard El. “Don’t miss the next time it comes through here. Be here and experience for yourself, because it’s something you have to experience.”