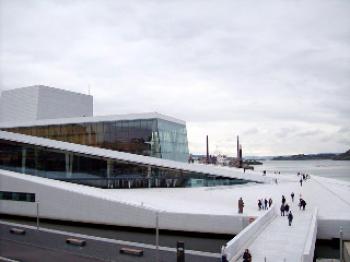 By Susan James
Print
In 2000, Norway’s capital Oslo launched an international competition for an architectural design that would be both monumental and cutting edge.

Well into the planning stages, the project was inspired by the success of Australia’s iconic Sydney Opera House. Like Sydney, it would act as a recognizable symbol for the Norwegian capital.

The building would also be the premier installation of a massive redevelopment of Oslo’s harbor area that is ongoing and due for completion in 2013. The renowned Norwegian architectural firm of Snohetta won the competition, and building commenced. In April 2008, a gala opening attended by Norway’s King Harald presented Oslo’s new Opera House to the world.

It rises up out of the cold waters of the fjord like the glaciers that inspired it, banks of glass windows looking like the bridge of some avant-garde, white ship. Outside, the silver and white Opera House has a cool presence, a sleekly layered building sheathed in Carrara marble, glass, and aluminum.

The theater’s exterior is formed like an apron stage, with tilted levels offset by oblique ramps that allow a continual flow of pedestrians to pass around and through the building, making it a passageway as well as a destination.

Inside, the cathedral-like expanse is punctuated by a wave-shaped grand staircase, which leads to three galleries and is composed of a geometrically complex construction of cone-shaped wooden elements.

The soaring quality of the space has been softened and formed into more intimate areas by the use of light-colored oak in the public passages, and oak darkened by ammonia fumes in the main auditorium. An integral part of the building’s focus has been the thoughtful consideration of line and form engaged in producing optimum acoustics.

Located on the Bjorvika Peninsula at the edge of Oslo Fjord, the 415,000-square-foot complex cost $685 million and took five years to build. It contains three theaters and two restaurants, including the recently opened, up-scale Argent.

A thoughtful selection of art installations enrich the public spaces, including “The Other Wall,” by Olafur Eliasson, and “Hyperoverture,” by Linus Elmes and Ludvig Lofgren.

A dedicated team of artists focused on each aspect of the building. The design of the aluminum cladding on the upper exterior level was taken from old weaving techniques as a collaboration of Norwegian artists Astrid Lovaas and Kirsten Wagle.

Minister of Culture Trond Giske pronounced the opera house the nation’s gift to its capital. “We built the country’s largest building for cultural activities,” said Giske, “second only to the 13th century Niadros Cathedral.”

Norway’s capital is determined to establish itself as a cutting edge destination for art, music, and architecture. As the new symbol of a revitalized Oslo, the nation’s gift to its capital is a splendid one.