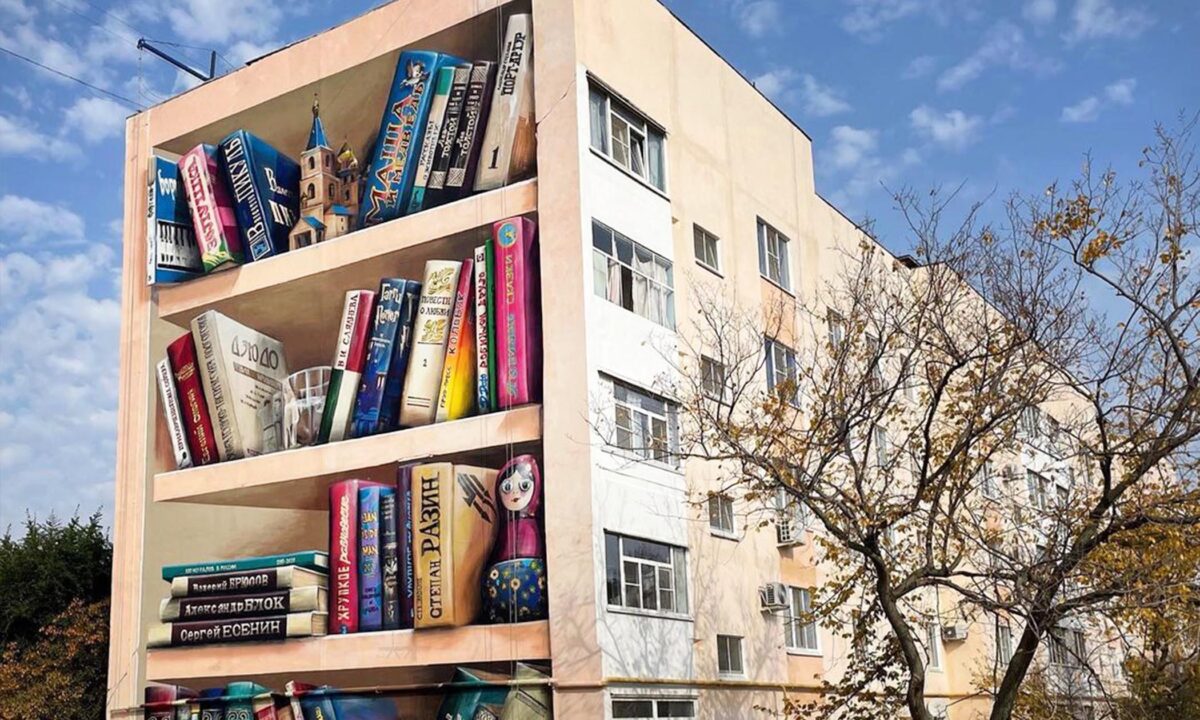 Jan used to be afraid of heights. He recalled his hands shaking as he stood teetering on the side of a 9-story apartment building, painting his illusionistic murals on a grand scale, nervously wielding paint-filled aerosol cans.

A wellspring of creative talent, graffiti artist Jan Heinsbroek, from Utrecht, Netherlands, in 2016 transformed that apartment into what might pass for a cubby-hole shelf owned by the giant from “Jack and the Beanstalk.” Tucked inside each “little” nook were painted an assortment of odd and interesting trinkets, a wonderous feast for the eye. This 3D mural on the side of the building spruced up an otherwise blasé neighborhood.

Tucked in each shadow box were a teddy bear, a Roman bust, pieces of Asian pottery, glass birds, a picture frame, and a singing frog playing the banjo—all portrayed with such illusionism that, standing back 100 feet, that drab, utterly mundane apartment magically sprang alive in 3-dimentional color.

For an earlier Jan, a later project, a 5-story apartment complex in Russia in 2021, would have given him the heebie-jeebies. Now? No sweat.

The main challenge for his proposed giant-sized bookshelf would be rendering the preverbal labyrinth of the Slavic alphabet and, of course, not least of all, getting the local residents onboard with the project, so as not to ruffle any feathers.

But he, himself, knew the mural would be well received in that bleak, colorless Soviet-style neighborhood in southwestern Russia.

“Most of the time, these are areas where people can use some extra color,” Jan told The Epoch Times. “All we need is a good wall and good people.”

Knowing that this was where people lived, he wanted to add something to the neighborhood, and said it would be great “to get the peoples involved in the painting or project.”

So, after Jan reached out to local shops, a business owner agreed to solicit titles of people’s favorite books from neighbors and hand out flyers about the mural project.

Before long, a handful of residents came together in a collaboration with Jan. They “started to get more involved by talking to each other and getting to know one another,” he told the newspaper. “This concept was also a way to connect people through books. … It could be that your neighbor, who you don’t know, loves the same books as you.”

The artist added, “In this way, you have more in common than you thought.”

Soon, Jan was back on the mechanical scaffold, roughing in shapes: starting from very general blocks of color; then shading in light and dark tones; before finishing fine details, such as book titles in gold or colored script, colorful or rustic book covers, a mini castle statuette, and—for a Slavic touch—a matryoshka doll (inspired by one of the elderly shawl-donning aunties).

On this particular wall, completed in the fall of 2021 in the small town of Solnechnodol’sk, Jan made sure not to stop until he was totally satisfied with, and thus proud of, his work.

Stepping back, what was once an utterly forgettable, monotonous, cookie-cutter building was transformed into something magical and unforgettable, like a prop from one of Grimm’s Fairy Tales.

“The best ones,” Jan said, speaking of his works, “are the ones that look realistic and have a lot of stories in them.” We think the residents of Solnechnodol’sk would agree, this one qualifies.

He adds, “It makes people proud because it is their own story.”

Here are a few more impressive works by Jan, who goes by the Instagram moniker JanIsDeMan: