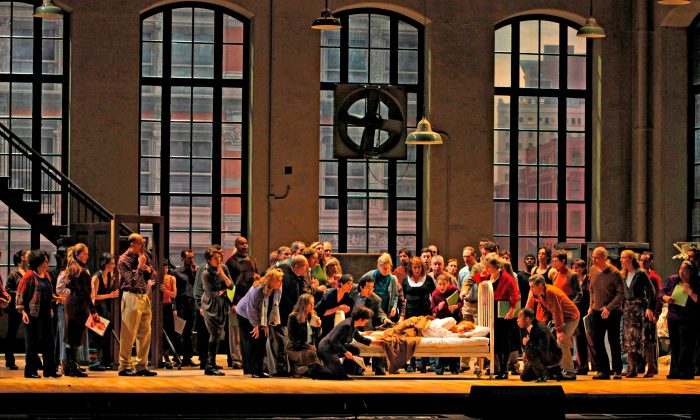 NEW YORK—It’s not all that often the soprano turns cartwheels after a show, no matter how great it has been. But in the finale of the Met Opera’s smashing revival of Bellini’s La Sonnambula Diana Damrau kicks up her heels in a Swiss folk dance and performs three of those gymnastic feats across the stage to bring the curtain down on a great night at the opera that includes a thrilling return by the Mexican tenor Javier Camarena.

Damrau is a marvel. Her voice, always crystal clear and delicate, is full of such joy that it spreads to all who hear her. She makes the most difficult passages sound effortless, even as she sings while twirling around a room, trying on a pair of shoes, rejecting a Heidi wig for her own ponytail, or crawling across a tabletop. Her pianissimo notes, barely above a whisper, go straight to the heart.

Camarena is one of the most exciting tenors singing today. He has a strong voice, rich in timbre and nuanced with subtle phrasing and a soaring range. Vocally, he is somewhat reminiscent of Richard Tucker. Physically, he looks a bit like the young Babe Ruth, and he hit a grand slam in the big tenor aria “Ah! Perchè non posso odiarti” earning a cascade of bravos. This is only his second appearance at the Met. One hopes there will be more.

The Met production of Bellini’s tuneful “semi-serious” opera by the stage director Mary Zimmerman was unveiled in 2009. It moves the action from its original Swiss Alpine village in the early 19th century to a rehearsal studio that looks like a SoHo loft where a cast and crew are preparing a modern-day performance of La Sonnambula.

The action then mirrors the original. There is a love triangle that becomes more complicated as the story unfolds. Amina and Elvino are about to be married, but Lisa, who was once engaged to Elvino, still carries the flame. Then there is Alessio who is in love with Lisa, but she won’t give him the time of day.

Enter a stranger—handsome, smartly dressed, and clearly rich—who says he grew up in the village and begins to flirt with Amina, to Elvino’s great annoyance. It turns out that the stranger is actually Count Rodolfo, the long lost son of the dead count, and the locals regale him with tales of a “phantom” that haunts the town and walks only at night.

Given the opera’s title, it will be no surprise to anyone that this ghost is none other than Amina who is subject to sleepwalking. Unfortunately, she sleepwalks right into the count’s bedroom at the inn and is discovered there the next morning, further fueling Elvino’s jealous rage to the point where he breaks his engagement and is ready to lead Lisa to the altar.

Zimmerman employs several devices common in the legitimate theater, but unusual for opera, to get the audience involved in the action. One is to use the aisles as a stage entrance. During her first sleepwalking scene, Damrau enters from the back of the house and moves trancelike and barefoot down the left aisle before ascending the stage, singing all the while.

La Sonnambula is also an opera that lends itself to innovative directorial touches. Bellini’s score calls for considerable interaction between the chorus and the principals, and members of the excellent Met chorus get several chances to display their acting skills in a number of scenes, talents that a stage director like Zimmerman can exploit to the fullest.

That is even more true for the principals. Long gone are the days an opera singer can make his or her mark, belt out a few high notes, and earn the plaudits of an adoring audience. Implausible as most opera plots are, they are no less so than what is offered on TV and the difference in making opera an exhilarating evening of theater and a staged vocal recital is in the acting.

Damrau and Camarena have excellent chemistry. Just the way they gaze into each other’s eyes is enough to convince an audience they are in love. Their first reconciliation over Elvino’s jealousy is a duet (“Son geloso”) that ends with Damrau climbing up on a table and crawling over to Camarena. It is a playful and sexy scene that enhances the words they sing.

Marco Armiliato conducts the excellent MET Orchestra with a sure understanding of what both Bellini and Zimmerman are striving for. The rest of cast add fine performances, notably a lovely turn by Rachelle Durkin as Lisa and a solid performance by Michele Pertusi as Count Rodolfo.

Wilborn Hampton is an author and theater critic.