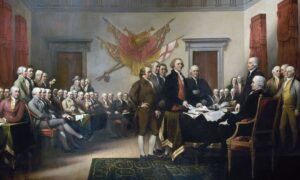 Civic Virtues as Moral Facts: Recovering the Other Half of Our Founding
0
Share Now
TelegramFacebookTweetEmailTellMeWeReddit
Copy Link 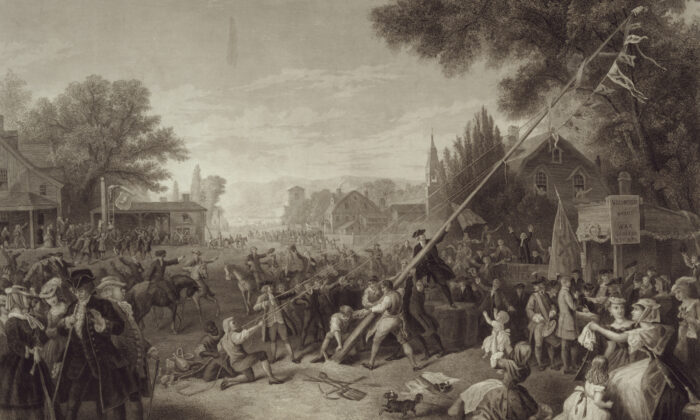 How the British kept chopping down New York’s freedom symbol (and how the colonists kept raising it back up)
By W. Kesler Jackson
biggersmaller
Print

In the decade leading up to the American Revolutionary War, Boston wasn’t the only scene of intense friction between British soldiers and American colonials. Imperial troops had likewise been stationed in New York.

It’s a truism in history that occupying armies, whatever their original intentions, eventually breed resentment from the locals. While Boston had its Liberty Tree, here the Sons of Liberty had been erecting liberty poles—wooden poles mounted by a cap—since at least 1766, when the first was raised during celebrations of the repeal of the Stamp Act. That original pole, hoisted in “the Fields”—today’s City Hall Park in Manhattan, at the time located just outside the city but, not coincidentally, right in front of a British barracks—stood as a reminder to all of colonial rights.

Liberty poles invoked a well-known classical motif: the spear mounted by the cap of a freed slave, symbolizing the freedom of the Romans from the tyrant Julius Caesar. The same symbol had been used after the Glorious Revolution of 1688 on a commemorative medal struck for William III.

Joseph Allicocke—an influential merchant and one of the instigators of the raising of New York’s original Liberty Pole—described his motivations without mincing words: “to scourge the base Enemies of our Country and our greatest Darling LIBERTY.” Every day, a group of New Yorkers gathered at the Liberty Pole and performed drills, certainly meant to egg on watching British soldiers.

And it worked. As an object of protest and resistance, New York’s first Liberty Pole was torn down by those same British soldiers.

The colonists responded by raising it up again.

The soldiers once more tore it down, enraging many of New York’s inhabitants. Up it went again. Down, then up, then down.

During one demolition, a soldier fired into the disapproving crowd and wounded one of its members. Another Redcoat bayoneted a leading citizen of the colony. Though one of these soldiers was later punished with five hundred lashes for the crime of assaulting a civilian, tension between soldiery and citizenry remained high. Liberty poles kept going up, only to be torn down by ever-less-patient troops.

In response, New Yorkers raised a new sort of pole, its lower portions armored with iron plates, the pole itself driven so deep into the ground that it was nigh impossible to tear down the way previous poles had been. The British general on the scene, Thomas Gage, described the circumstances:

People seem distracted everywhere. It is now as common here to assemble on all occasions of public concern at the Liberty Pole and Coffee House as for the ancient Romans to repair to the Forum. And orators harangue on all sides.

Meanwhile, the New York assembly had been temporarily dissolved for failing to appropriate funds for the local garrison. When the assembly finally gave in to British demands for the appropriation in December 1769, the Sons of Liberty were furious, posting a broadside addressed “To the Betrayed Inhabitants of the City and Colony of New York.”

British soldiers, meanwhile, did what they had always done: they set out to chop down the Liberty Pole, though in this case, they used a charge of black powder to blow it up (when that didn’t work, they managed to chop it down the old-fashioned way). Then, to pour salt in the wound, they sawed the pole into pieces and dumped them in front of the above-mentioned, Sons-of-Liberty-frequented “Coffee House” before publishing their own broadside attacking the Sons of Liberty as “the real enemies of society.”

On Jan. 19, 1770—about a week after the (armored) Liberty Pole’s destruction—the deterioration of relations between soldiers and New Yorkers erupted into out-and-out fighting at the Fields. Three thousand New Yorkers, some armed with clubs or cutlasses, gathered at what was left of the pole (now a mere stump) and began to harass the soldiers.

Those soldiers now came pouring out of the barracks. The order to the troops: “Draw your bayonets and cut your way through them.”

The “battle” that resulted was actually more of a huge street brawl. From the Fields, it spilled into New York City’s streets, including one called Golden Hill (now Eden’s Alley in Manhattan). For two whole days, the city’s government collapsed, armed gangs of locals roaming the streets along with armed gangs of soldiers, all looking for a fight. Several Redcoats were injured (one seriously), and a few New Yorkers, too. The so-called Battle of Golden Hill ended when additional military forces finally managed to escort the roving soldiers back to their barracks.

Had things continued to spiral out of control, the situation might have devolved into a “Boston Massacre”-style event weeks before the actual Boston Massacre.

The regiment was eventually exiled by an appalled Gage to service in Florida. New York magistrates, similarly appalled at their own citizens’ behavior, refused to allow another Liberty Pole to be erected at the Fields.

But a leading Son of Liberty named Isaac Sears purchased the plot of land adjacent to the previous site—and proceeded to build a private liberty pole taller than any structure in New York. Fitted with metal plating, the pole was capped with the word “LIBERTY.”

It would stand until the outbreak of the Revolutionary War five years later.

W. Kesler Jackson, who teaches Western, Islamic, American, Asian, and World histories at the university level, is also known on YouTube as “The Nomadic Professor.” You can follow his work, including entire online history courses featuring his signature on-location videos filmed the world over, at his website (NomadicProfessor.com).