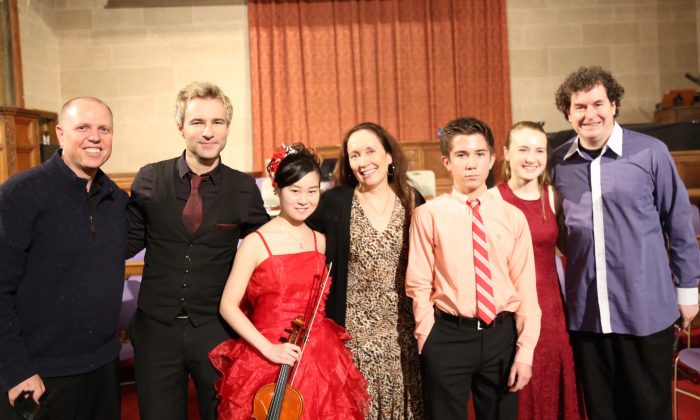 NEW YORK—In its Oct. 2015 four-event Irish Festival, the New York Concerti Sinfonietta expanded its musical programs to include two dramas in celebration of the 150th birthday of W. B. Yeats. This month, to end a pair of January afternoon concerts, the Sinfonietta added the unique art of Irish percussive dance, literally “dropping the other shoe.”

The guest dancer’s dazzling display of terpsichorean virtuosity delighted the audience, along with a guest jazz clarinetist’s memorable improvisations on classical repertory. Also heard were appearances by first prize winners of the 2016 International Shining Stars Debut Series, as well as returning soloists.

Niall O’Leary first accompanied the orchestra on the spoons.

The concerts were held in two acoustically admirable West Side churches: St. Gregory the Great on Jan. 9, and St. Paul & St. Andrew Jan. 10. The artistic director and founder of the New York Concerti Sinfonietta and its competitions is Dr. Julie Jordan, who celebrated her 30th anniversary in 2015 as a faculty member of The Juilliard School Evening Division.

To conclude the Jan. 10 concert, the New York Concerti Sinfonietta invited a piquant pair of surprise special guests to appear with the orchestra’s string section.

Clarinetist Adrian Cunningham had played with the Sinfonietta at Carnegie in May 2015 as a sideman for the great jazz trombonist Wycliffe Gordon. This time, he performed as a soloist in his own right. Augmenting Gershwin’s lilting “Lullaby,” Cunningham creatively improvised on the first violin part, from subtly quiet, beautifully modulated bluesy phrases to roof-raising riffs in the highest register. That Cunningham was able to spontaneously and meaningfully enhance Gershwin’s own composition is the highest possible compliment one could pay him.

Cunningham concluded with Argentine composer Astor Piazzolla’s sultry “Liebertango.” Again, Cunningham improvised on the theme, limning the melody over a pulsating, syncopated accompaniment, setting his melodic line free to ascend to a dizzying height like a bird in flight, its colorful plumage glittering in the tropical sunlight.

Irish stepdancer and folk spoon player Niall O’Leary closed the concert with dances to works by British and American composers. In the finale of Gustav Holst’s “St. Paul Suite” (which quotes “Greensleeves”), and again in the “Hoedown” from Aaron Copland’s cowboy ballet, “Rodeo,” O’Leary first accompanied the orchestra on the spoons.

Sitting on a stool, he held a metal soup spoon and a serving spoon in his right hand back-to-back in the manner of castanets, rapidly striking them against his thigh and strumming them with his left hand. Midway through each work, he leapt off the stool and performed a quick Irish stepdance on a wooden runway laid down in the first four rows of the center aisle, his taps echoing thunderously throughout the hall to sensational effect.

Witnessing an Australian, half-Irish clarinetist improvise brilliantly on the quintessentially American composer George Gershwin, and a Dublin-trained dancer perform an Irish stepdance to Aaron Copland’s Old-West “Hoedown” (which in turn is partly based on an Irish Reel), served to firmly underscore the international character of the New York Concerti Sinfonietta’s competition concerts.

The New York Concerti Sinfonietta was itself a Sinfonietta of Shining Stars, studded with some of New York’s finest soloists, orchestra principals, and chamber music players (including members of the Aeolus Quartet, Sybarite5, and others too numerous to mention).

Principal conductor Paul Hostetter was an alert, responsive, and emotionally expressive maestro, who expertly supported the differing interpretations of the various soloists with an almost telepathic rapport, eliciting ravishing playing from his superb orchestral instrumentalists.

Five First Prize winners of the 2016 International “Shining Stars” Series made their debuts at these concerts.

Violinist Sophia Steger was a standout. At 16 years of age, she exhibited the confidence and poise of a seasoned artist. Her highly accomplished performance of the first movement of Tchaikovsky’s Violin Concerto in D Major, Op. 64, was richly expressive, technically secure, and tonally lustrous. It was a convincing, fully-formed interpretation that allowed the violin’s melodic line to soar over the orchestra.

Steger’s intonation was praiseworthy, with dead-on double-stops. Her phrasing and rubato were eloquent, the passagework benefitting from chiseled bowing. Her fervent, fresh view of the concerto’s cadenza emphasized the melodic thread that runs through the figurations. Throughout, Steger’s concentration and deep involvement with what she was playing was particularly evident.

Fourteen-year-old Lenny Meng soloed in Mendelssohn’s Capriccio Brillante for Piano and Orchestra, Op. 22, a welcome novelty. Meng played with attack and self-possession, as well as lyrical, sensitive phrasing, summoning the articulation necessary to capture the lightness of Mendelssohn’s virtuoso writing. At times, it seemed as if his technique was being pushed to its limits (but not beyond) by the work’s considerable technical demands. However, it did not detract from a highly creditable presentation.

Fifteen-year-old Jane Bua played the first movement of Mendelssohn’s Piano Concerto No. 1 in G Minor, Op. 25. It was a big-league performance for one so comparatively young, as she scampered with velocity through the work’s octaves, arpeggios, and scales, but relaxed for the poetically phrased lyrical second theme. Her playing was fluent but not relentless. The fiery close of the movement was indeed impressive for her technical command, keyboard facility, powerful tone, and interpretative conviction.

Lastly, Christian Maloney, age 14, older brother of cellist Ian Maloney, was heard in the Mendelssohn Violin Concerto’s finale. His was an overtly romantic version, with wide, ripe vibrato and conspicuous dynamic gradations and shading. He played the principal theme with sharply delineated upbow staccato and considerable fingerboard facility. The fleet passages were well articulated and rhythmically buoyant, the rapid figurations contrasting with the sustained melodies in the orchestra. Maloney showed promise and a still-developing artistry.

Two previous soloists—a violinist and a pianist— returned for encore appearances, playing works that completely contrasted with their prior repertory.

Violinist Yurie Minamaya had already demonstrated her affinity for romantic music in her May 2015 appearance with the Sinfonietta in the Wieniawski Second Concerto. On Jan. 10, she played the first movement of the classically conceived Mendelssohn Violin Concerto.

Minamaya’s Mendelssohn was slower and more somber than customary, emphasizing the movement’s moody, minor-key aspects. She displayed firm bow-to-string contact and a warm vibrato, combined with lieder-like nuance and a quality of youthful innocence.

Stanley Sisskin was previously heard with the Sinfonietta in Oct. 2014 in a magical performance of Mozart’s Piano Concerto No. 24 that was a paragon of classical proportion and refinement.

On Jan. 9, playing the Grieg Concerto for the first time, Sisskin gave a performance of genuine grandeur and majesty, doing justice to both its heaven-storming and reflective elements. Far more than any other pianist that afternoon, he unleashed the full tonal potential of the 7-foot Yamaha grand, with a virile, commanding sonority and resonant bass pedal points.

His perfectly timed first movement cadenza was thrilling in its passion and power. Throughout the concerto, the orchestra distinguished itself with lovely solos by the principal flute, first horn, and cello section. In the second movement, Sisskin played with real poetry. If a few rapid passages in the finale were not quite note perfect, it was of little consequence; the force of Sisskin’s concept swept all before it. To borrow a title from Grieg’s popular “Peer Gynt,” Sisskin truly transformed the auditorium into “The Hall of the Mountain King”!

The New York Concerti Sinfonietta will next perform on June 3, 2016 at Carnegie Hall. Additional concerts will take place June 4-7 at historic New York City venues, as well as throughout the 2016-2017 season. Annual auditions will be held in Ireland, San Francisco, Salt Lake City, Dallas, Orlando, and New York City.

Michael Sherwin writes for the Epoch Times, Wagner Notes, and other publications. He is producing a CD album of 20th-century American choral music for the National Endowment for the Arts.