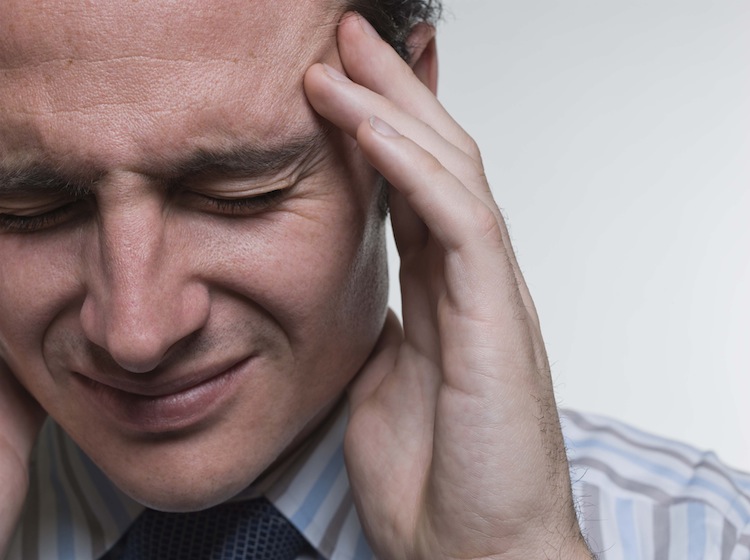 Twenty per cent of the UK population suffer from migraine. A new treatment with a portable magnetic device has shown positive results in clinical trials. (Jupiterimages/photos.com)
Health

A new handheld treatment promises hope for migraine sufferers, according to research presented at a headache conference in London last week.

Passing a brief magnetic pulse to the back of the head from a portable device at the onset of a migraine attack has shown positive results in clinical trials in the UK.

Almost three-quarters of those who took part in trials at migraine clinics in London, Hull, Bath, Exeter, Liverpool, and Aberdeen reported a reduction of pain. More than half of them experienced fewer headache days and almost two-thirds suffered less associated migraine symptoms.

For migraine patients who find that conventional treatment provides no relief, too many side effects or is unsafe taken with other medication, researchers believe that the Spring Transcranial Magnetic Stimulation (TMS) device may be an effective treatment alternative.

Dr Fayyaz Ahmed, a Hull-based neurologist who chairs the British Association for the Study of Headache (BASH), presented his research findings at the European Headache and Migraine Trust International Congress on Friday, Sept. 21.

“Neurostimulation, I think, is the future of migraine and headache treatment,” Ahmed said in an email.

Experts say that migraine is a complex disorder with different patients responding to different treatments.

“I would recommend the treatment in certain cases. Those with infrequent attacks particularly those where the attacks are disabling and are scared of missing an important social or work commitment would do well,” Ahmed said.

“This treatment provides an additional option and a glimmer of hope to such patients that their life will not be ruled by headaches. The treatment is safe and hence those that respond to the treatment might prefer this compared to oral medication.”

The study findings come in the wake of a new report released by National Institute for Clinical Excellence (NICE) warning that up to 1 million people may suffer headaches as a result of overuse of painkillers.

Dr Giles Elrington, medical director and consultant neurologist at the charity National Migraine Centre in London, said in an email: “These new treatments could be a major step forward in the treatment of migraine. Four in ten patients I see are taking too many painkillers, making their headaches worse. They could provide another option with less harmful side effects.”

Researchers say TMS is the only non-invasive neurostimulation device to be effective in migraine treatment for which clinical and basic experimental data show how its effect is achieved.

Another speaker at the congress, Anna Andreou, headache research fellow in the anaesthetics, pain medicine and intensive care section at London’s Imperial College, has studied how the TMS device interferes with the pain pathway.

A chronic migraine sufferer herself, with up to three attacks a week, Andreou tried the device and found that it worked for two-thirds of her migraine episodes. She was amazed at the results. “When it does work the relief is within two minutes, the attack is gone,” Andreou said.

Yasmin Bibi, who is a long-term sufferer of migraine and has been frustrated with current conventional treatment, took part in the study. “I have suffered migraine for nine years, tried a lot of medicines and saw different consultants to no avail,” Bibi said in a statement.

“I could be completely debilitated for a whole week, needed time off work and was at my wit’s end. Now the device helps me to cope.”

Currently, the TMS is only available in private clinics. Some doctors doubt that it will be cost-effective for the NHS.

Dr Nicola Giffin, consultant neurologist at the Royal United Hospital, Bath, tried the TMS with patients who were not taking medication, including a pregnant woman and one who was trying to conceive.

“It’s got a potential benefit for some patients but it’s going to probably be too expensive for routine NHS use,” she said. “I don’t think it’s a cure for migraine.”

Andreou said that considering the TMS will not be prescribed to every patient it presents a reasonable alternative option. More research is needed, she conceded. Yet, there is no funding available for research in the UK. All the data comes from studies done in Europe and the US.

Neurostimulation technology has been used in medicine for 50 years. Large devices have treated movement disorders like Parkinson’s disease and depression. The US company eNeura Therapeutics reduced the size and developed this handheld TMS for migraine relief.

Government statistics show that migraine affects 8 million people in the UK, with the annual cost to the UK economy an estimated £7 billion.