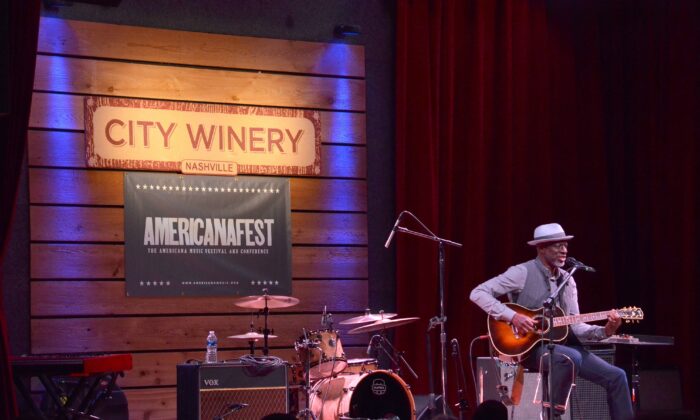 Nashville Is for Music Lovers

“All the businesses you see on these two streets around us are related to the music industry specifically. Studios, publishing companies, labels,” says my tour guide, Brian Keith Wright, as we walk toward RCA Studio B, the 1956 studio that developed the Nashville Sound and recorded over 200 songs by Elvis Presley. This is Music Row, what appears to be a mix of commercial buildings and residences.

“Most of the houses are publishing companies. So they have a staff of writers that come to work every day 9–5 and they bring their guitar and their ideas and they get in a room and they try to write songs together. That is very uniquely Nashville,” Wright says.

Wright is a Nashville native who spent over 20 years at the Country Music Hall of Fame. A walking tour of Music Row with an industry veteran is in some ways a condensed version of chatting up locals. Everyone has a story of the biz, of Johnny Cash and June Carter, of Elvis, of RCA studios, of casual encounters or historical moments. But a stroll past the famous studios with a storyteller is unbeatable.

“John Carter Cash [Johnny and June’s son] has been one of my best friends since I was 8 years old. We were in the same second-grade class. So I hung out at the Cash house when I was little,” he says.

Wright tells me about the strange dream Johnny Cash had that inspired the mariachi horns in “Ring of Fire,” and the heat Tammy Wynette has gotten over the years for her hit “Stand by Your Man,” interpreted by some as the quintessential door-mat victim song. “She once told me, ‘I spent 20 minutes writing it… and 30 years defending it.’”

The stories behind the songs might not come to light until decades later on a talk show or in a tell-all book. “In Nashville, that story gets out because lots of other people are in the room. And they’ll tell somebody, and so people know what the song is about a lot of times—locally at least.” The songwriting community is the “blood of the city,” Wright says. “Tens of thousands of people are coming here each year to try to make it as a songwriter. And a handful do.”

If there is a best time to visit Music City, I wouldn’t deny that September’s annual Americanafest is a favored choice. But much like the city, even “Americana” music can be difficult to pin down; there’s a little bit of everything involved. I picked up my festival wristband and spent the weekend going from venue to venue.

Like a lazy Sunday afternoon, a chill crowd spread out before the stage at Musicians Corner in Centennial Park, enjoying food carts and a series of fine musical acts at a comfortable volume you could still chat over: a bit of country, a bit of folk, funk, blues, and something that defied category and brought blues and zydeco accordion together.

The sun had set and lights were coming up as the final act took the stage. The first chords rang out, and like a sonic ripple, you could see everyone in the half-light sit right up and pay attention. And like the aftermath of an explosion everything was pulled back toward the source. I got up and pushed my way forward to the stage to see.

The Marcus King Band prevented any of us from leaving a bit early, riveting us with a pair of horns, a tight rhythm section pushing back the night, and King himself, a pale kid and his guitar at first blush, but something important that demanded a witness as soon as he started to play and sing. His voice had a bluesy rasp to it that belied his 23 years, and his guitar playing was as potent as any of the masters—the soul of the blues and the confident bearing of southern rock. I left feeling like I had discovered somebody, though as a headliner his name was already household to anyone in the know. Not just up-and-coming, but already there.

In the evening, I found a perch at a tall table at City Winery, where I listened to Nashville transplant-resident and three-time Grammy-winning blues and Americana artist Keb Mo’ who is as funny as he is musically talented, his shining National guitar as bright as his smile. The next night I caught a couple of acts a bar called The 5 Spot. One struck me as a typical indie/alternative band. The next featured a string bass and a harmonica player.

Up and down Honky Tony Highway—lower Broadway—talented songsters took cramped stages in the front windows, playing for petty cash dropped in the tip jar when it came through the crowd. Competition is fierce and surely many of these folks could do well in other towns, but work day jobs just to be able to do their thing in Music City.

While the festival is a good excuse to visit, much of everything I did during that long weekend could be done in any season. Nashville is a pilgrimage destination for all music lovers.

Country music fans have the County Music Hall of Fame and Museum and its CMA Theater, live radio shows at the Grand Ole Opry, tours of the Opry’s former home, the Ryman Auditorium with its state-of-the-art sound-and-light history show before each tour. The Bluebird Café, the intimate venue for future songwriting stars. The Johnny Cash Museum.

Fans of musical instruments must visit the Gallery of Iconic Guitars, also known as The GIG on the campus of Belmont University. The late collector Steven Kern Shaw left the bulk of this collection of nearly 500 guitars arranged by their makers: Martin, National, Fender, Gibson. They aren’t put under glass, but rather await use for performances, or to be picked up and played and studied by students, scholars, and luthiers.

Then stop in at Carter Vintage Guitars. You’d be hard-pressed to find a better collection of new and vintage high-end guitars than this showroom, founded in 2012 by Christie and Walter Carter.

Stars and many who aspire to be come here to sample the wares. Where else can you pick up a $25,000 guitar and try it out in a private room? Actor-musician John C. Reilly sat among a rack of guitars, playing a tune and singing while a few of us wandered down that aisle to catch a glimpse while still leaving him to his thing. He had a show that night at another great musical attraction: Third Man Records.

Detroit artist and producer Jack White staked a claim in Music City, opening this record shop and studio in the Pie Town neighborhood. This is the only place in the world where artists can record live directly to vinyl. In the front room an old coin-operated version of the process—the sort you might have found at Coney Island back in the day—stands like a wooden phone booth. This 1947 Voice-O-Graph recalls the days when recording one’s voice was a unique thrill, the latest miracle of technology. Neil Young stopped in once, saw this battered old booth, and asked if he could record a song in it. No one says no to Neil Young. He loved it so much he ended up doing an entire album within. The staff moved it into the studio in back for that project, but I stood there for a solid minute trying to figure out how he could play a guitar in such a cramped space.

At an Imagine Recordings experience, inside Sound Stage Studios on Music Row, you can watch and listen from inside the studio as performers spend a couple of hours recording a tune or two just beyond the glass. Tour the RCA Studio B where Elvis and Roy Orbison once recorded.

At the Musicians Hall of Fame and Museum, my guide is Jay McDowell, a veteran multi-instrumentalist who’s played the Opry and Austin City Limits. Now he has a gig playing host, Dante’s Virgil guiding me through the Ring of Fire and a stage-smoked Purple Haze room honoring Jimi Hendrix.

“We set up the museum geographically by city because we are all types of music,” says McDowell. He begins the tour with Nashville and the story of the Fisk Jubilee Singers, whose performances raised over $40,000 for Fisk University after the Civil War.

“In 1873, they sang for Queen Victoria of England. She asked where they were from and they said Nashville. And the Queen said, ‘That must be a music city.’ That got press all over, 50 years before the Opry started. We are Music City now, obviously, because of country music and the whole industry here.”

Among the exhibits are also nods to the non-household names, the studio players and backing musicians, such as the Wrecking Crew or session drummer Hal Blaine who have performed on a surprising litany of familiar artists’ songs.

As any modern museum worth its salt, this one has its share of interactive exhibits, rooms with instruments awaiting patrons who want to pluck a guitar or hear their voice through the magical filters of studio effects.

That night at the Grand Ole Opry, Chris Shiflett, the lead guitarist for Foo Fighters revealed he’s more than just rock, as he played a couple of tunes from his forthcoming country album. By Sunday morning, I wished I had a full month to spend here in Music City. Just as it is for the honky-tonk players, it’s enough for me just to be here among the roots of American music.