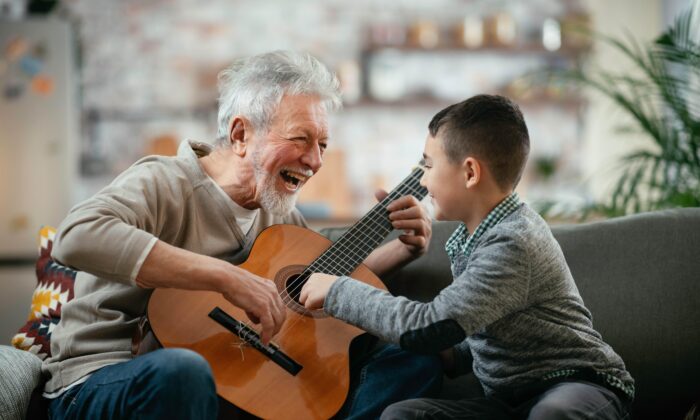 Music is known for bringing joy, but can also be used as a therapy for healing and enrichment. (Just Life/Shutterstock)
Mind & Body

Music plays an integral role in human cultural expression around the world. It has a unique power to move and motivate us, but according to researchers, “music therapy” might just be capable of even more than that.

Music, when used as a therapeutic tool, can help with a variety of health and holistic complaints. Here are eight tried and tested reasons to believe in the healing power of music.

Speaking to HuffPost, classical composer Marc Neikrug shared: “I think it’s really important to let kids, at the earliest age, build some kind of ability to focus. Great music can do that,” he explained, “because you’re drawn into what you’re listening to.” This ability to focus sets the little ones up brilliantly for their first years in school.

According to a study from the University of Liverpool, learning to play an instrument at a young age increases the flow of blood to the brain’s left hemisphere. This is excellent for the child’s developing brain.

Music is multiform, exposing children to auditory, emotional, cognitive, and visual stimuli. According to the journal Psychology of Music, those children who were exposed to a multi-year program of music tuition displayed superior cognitive performance in reading skills compared with their non-musically trained peers.

UCLA professor James S. Catterall looked at the academic achievement of 6,500 low-income students. Upon entering the tenth grade, 41.4 percent of the students who had taken art courses during their early years of education scored in the top half on standardized tests.

Of those who had minimal arts experience, only 25 percent scored in the top half.

It’s all in the rhythm. Listening to music that has a repetitive rhythm can help to reduce and regulate the heart rate. A 2015 Oxford University study shared claimed that listening to music with a repeated 10-second rhythm prompted a fall in blood pressure.

Rhythmic music could, therefore, be used as a complementary treatment for hypertension.

5. It can alleviate stress and depression

Music being the age-old mood alterer that it is, a melody can boost us up just as easily as it can calm us down. A scientific study from McGill University in Canada found that the “feel-good” neurochemical dopamine is released when we listen to music.

Researchers scanned the brains of eight participants as they listened to music over the course of three sessions. Their study is thought to have been the first to show that an abstract reward (listening to music) released dopamine in the same way as a tangible reward (eating or sleeping) did.

Playing an instrument, according to WebMD, can even “short-circuit the stress response” and stop anxiety and depression from becoming chronic issues.

Playing music in order to heal from post traumatic stress disorder (PTSD) is a concept that has gained traction since the United States Department of Veterans Affairs shared an enlightening study. Veterans experiencing PTSD reported experiencing relief through learning to play the guitar, but according to the study’s conclusions, any instrument has the capacity to achieve the same effect.

“Veterans received an hour of individual guitar training each week,” the study authors shared, “and a weekly group instruction session. Veterans also received a guitar, along with sheet music and other supplies,” they added, “that they were allowed to keep after the study concluded.”

Patients suffering from Alzheimer’s disease often experience memory loss and confusion. Losing their capacity to sustain coherent interactions with the people around them can cause huge distress to both the patient and their loved ones.

However, Alzheimer’s advocacy site Being Patient cites research from the University of Lille in Paris, claiming that music can help patients to manage the disease and maybe even recover lost memories. Listening to music, they note, is therapeutic for the caregiver, too.

For anybody who experiences a chronic sleep disorder provoked by anxiety or insomnia, “music-assisted relaxation” could be the key to a better night’s sleep. According to the Center for Cardiovascular Disease in China, listening to music before and during sleep can make a measurable difference to the quality of your nighttime rest.

Sleep-aid playlists and wellness apps have become part of a booming sleep-aid industry, says the Los Angeles Times. Troubled sleepers in numerous locations are finding comfort in musical white noise to help them switch off.

For a multitude of maladies, science suggests that music therapy could very well be the answer.