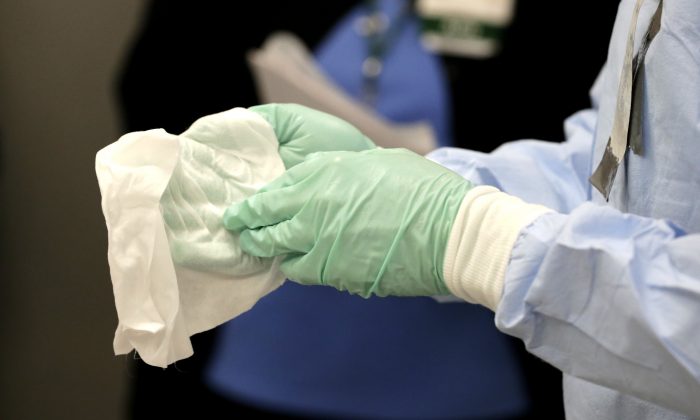 A British mother is warning other parents after her three-year-old got herpes from what she believes was a kiss from a relative.

Hayley Etheridge’s son, Baylie-Grey, developed a rash across his face caused by the herpes virus, according to the Manchester Evening News.

The 24-year-old mother, who is from Greater Manchester, was also informed that her unborn child was at risk. While herpes is rarely fatal for toddlers, newborns have relatively weak immune systems and so for them, it can be deadly.

Doctors told Etheridge that if the virus reached his eyes, her three-year-old could lose his sight.

“I remember sitting and crying talking to the doctors, asking them my questions and getting answers no mother wants to hear,” she told the Manchester Evening News.

“They told me that if the virus spread to his eyes that Baylie could go blind—I was absolutely terrified,” she added. “I had no idea that a simple cold sore virus could be so dangerous to a child.”

Luckily, Baylie-Grey has recovered and her second son, Vito, did not fall ill with herpes.

The concerned mother is now taking her story public in hopes that other parents might learn from her trauma.

‘When Doctors Told Me It Was Herpes, I Was Shocked’

Etheridge told the publication that she first noticed something was wrong when her son broke out in a rash across his face and became lethargic. She took him to the North Manchester General Hospital, where doctors informed her that the toddler had the herpes virus, or HSV-1.

“When doctors told me it was herpes I was shocked,” she told the Manchester Evening News, adding, “people assume it’s always sexually transmitted but it’s not.”

She told the publication she believes her son caught the virus after being kissed by a relative, but added that she wasn’t sure who it was that gave him the disease.

The herpes simplex virus is a contagious virus spread through direct interpersonal contact. According to Healthline, around 67 percent of people aged 49 and younger are carriers of the virus, though they may never experience an outbreak.

Babies who catch the herpes virus can develop severe complications, according to Healthline, including blindness, brain damage, and death.

People who catch the herpes virus will have it for the rest of their lives and there is no cure. Treatment focuses on alleviating some of the symptoms, which can include open sores.

When Baylie-Grey was diagnosed with herpes, she was 35-weeks pregnant with her second son, Vito.

“Doctors told me that if I passed it on to my newborn baby it could cause blindness, brain damage or he could even be stillborn,” she said.

“I was sat there thinking I have one child in a really serious situation and now I am being told my other baby could die. I have never been so scared in my life.”

HSV-1 is passed through skin-to-skin contact and saliva. Symptoms typically appear within several weeks of contracting the virus. The skin becomes painful or it may tingle, itch or burn, typically around the mouth.

Etheridge said she was closely monitored for the remainder of her pregnancy and was relieved when her baby was born without herpes.

“Vito is now two and has never had any problem or seemed to have contracted the virus, thankfully,” she said, adding that while people shouldn’t be overly protective of their children, there are risks to letting people kiss them.

“‘People say you shouldn’t wrap your children up in bubble wrap, let them come into germs and dirt and let them learn to fight it off on their own, and that’s fine,” she said, adding that “there are some things children aren’t able to fight off, and the risk is not worth it.”

“Please be careful with your babies, they’re so tiny and fragile that even a simple kiss can break them,” she warned.

Baby Hospitalized With Herpes After Being Kissed

The incident follows the case of a baby boy in Britain who was left fighting for his life after contracting the herpes virus in his eye after someone kissed him during a christening ceremony.

According to The Sun, the newborn Noah Tindle was four weeks old when his mother, Ashleigh White, noticed swelling and blistering in his left eye.

She told the news outlet that an initial medical consultation in September of last year suggested it may have been a benign tear-duct blockage. But after the swelling and discoloration got worse, she rushed her baby to a clinic for a second opinion.

Little Noah was then referred to Barnsley Hospital, where doctors tested the baby and confirmed he had become infected with the herpes simplex virus 1 (HSV1).

“I’d read something on Facebook about another baby having the virus and the blisters looked exactly the same,” she told The Sun.

“What I didn’t realize is that even if you don’t have an active cold sore, you still do carry the virus in your system and saliva, meaning you can never be too careful.”

She said doctors told her Noah had likely contracted the virus from a kiss.

“We went to a christening where friends were holding and kissing him—it could have been any of them,” she told the publication.

Noah spent over two months in the hospital receiving treatment for the infection. While the herpes virus is benign for healthy adults, babies can suffer complications—including death.

“We managed to catch it before it could enter his bloodstream,” the relieved mother told The Sun. “He couldn’t open his eyes for days.”

She said Noah received intense anti-viral drugs intravenously for two weeks, followed by prophylactic medication for another six months. He suffered a relapse in March and had to receive another round of intense medication.

“We still have a long way to go yet before we’re out of the dark,” his mother said.

The mother said, “I just want to make more people aware of the risks and consequences of kissing a baby, especially a newborn when you suffer cold sores.”