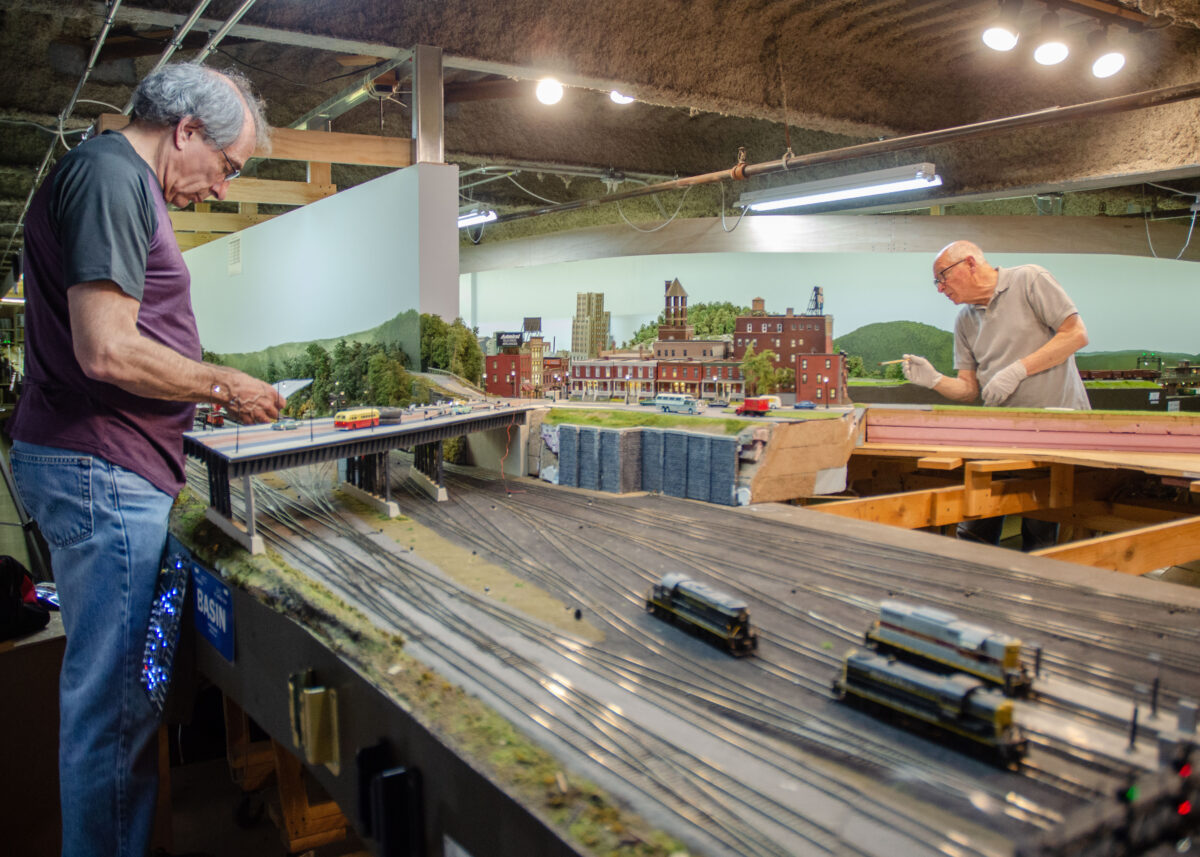 Model Railroading: It’s Bigger Than You May Think

Americans have a love affair with trains. The Broadway musical “On the Twentieth Century” and the Cary Grant-starring feature film “North by Northwest” both glorify the heyday of the 20th Century Limited, the most famous sleeper train in the world.

Young children sit fascinated as they watch freight trains roll by. Even metropolitan subway systems have been featured in many movies, as well as The Kingston Trio’s song, “M.T.A.” and Duke Ellington’s classic song, “Take the A Train.”

The Smithsonian National Museum of American History in Washington had a huge exhibit devoted entirely to decommissioned locomotives.

Generally, the love of something leads to the purchase (or adoption) of it. But almost no American can afford to buy a working railroad train, and even if he could, where would he drive it?

So the next best thing is a working scale model of one. That’s what model railroading is all about.

Train lovers build and display elaborate, detailed, miniature replicas of actual railroads from America’s heyday of train travel in their basements, garages, or any room they have that can hold such a setup. The trains actually traverse the tracks, often with sound effects of whistles and engines.

Additionally, the tracks may run across bridges or through towns, train stations, mountains, and wooded areas, all recreated with the same level of detail as the trains.

Members of the West Island Model Railroad Club on Long Island, New York, are all men, many of whom are retired or near retirement. One could argue that these guys in their 50s, 60s, and beyond are essentially playing with toys.

They agree without hesitation.

“It’s exactly what it is and a lot of us have earned the right to,” the club’s president, Vic Grappone, says.

“We are all babies at heart. We never grew up, and we love it,” club member Alan Alcabes told The Epoch Times the day before his 81st birthday.

His attraction to trains is nothing new.

“I can’t remember a time when I didn’t love trains. I was fascinated even when I was a little boy growing up in the City of New York,” he said.

As a youth, Alcabes experienced the glory days of American railroads.

“Some of us had the benefit of growing up in the golden age when there were still private railroads and passenger service,” he said. “It was really exciting, and we thought it was always going to be that way, but things change.”

His father bought him a train set in 1946, and he’s collected them ever since, although there was a long stretch of time when working and raising a family didn’t allow him the luxury of playing with trains.

Alcabes got married in 1963, and his wife not only accepts his hobby, but partakes in “railroad trips and excursions” with him throughout the United States and Europe.

The club occupies a 5,600-square-foot space on a single floor in a building in Hicksville, New York, and just about all of it is one huge model railroad setup.

The club currently has about 75 members, and different ones build and maintain the various locations throughout the lines.

The trains can get pricey. A single engine or club car can cost more than $300. Some cost up to $800. Thirty percent or more of the ones at West Island were donated by members.

Model railroading trains are generally used exactly as they come out of the box with no modifications. It’s with the buildings, roadways, and people surrounding the train tracks that the hobbyist can get creative and make them his own.

He can purchase a building and use it exactly how it was made, or he can add whatever details he sees fit.

Another option is a “scratch build,” where he doesn’t start with anything prefabricated but builds it himself from the bottom up.

Whichever option he chooses, it’s all about the details.

Alcabes is one of four club members who are working on recreating the train station of Allentown, Pennsylvania, circa the mid-20th century.

“We are modeling a specific era on this railroad,” he said. “So everything right down to the vehicles, the way the people are dressed, the building styles, the type of taxi cabs … everything you see is all appropriate for the decade or so between the 1950s and ’60s that we represent here.”

Club member Rick Lederer conceded that sometimes they take a little poetic license in their recreations.

Club member Rich Valente believes that once a model railroader takes on the task of recreating a specific location, “the historical aspect” gets added to the mix, and it becomes more than just playing with toys.

Hobbyists have been model railroading for decades. The West Island Model Railroad Club has been in existence since 1947 and is celebrating its 75th anniversary this year. Willis Hobby Shop, also on Long Island, has been selling trains and accessories since 1949.

Siegel has seen a gradual but steady decline in the public’s interest in the hobby industry, particularly among children, which he blames on video games.

Once he was allowed to reopen his store, he began selling train sets (as well as other items) to families who were stuck at home with each other.

“I’ve seen a lot of kids in the last year coming in for actual trains and train cars to build up the set that they built with Grandpa over the two years of COVID, and it’s a nice thing to see,” Siegel said.

He even gifted his own father a train set during the lockdown.

Siegel’s mother told him that his father never comes upstairs anymore and that she yells down to him on occasion to confirm that he’s still alive.

According to the website RailServe.com, the United States has 733 model railroad clubs and museums. There are about half a dozen on Long Island alone.

While the West Island Model Railroad Club is only one of them, Grappone, who designed signal systems for the real-life Long Island Railroad for 23 years, feels it’s because of the members’ “common interest” that the club “thrives on.”

“We argue sometimes, but it’s all out of the passion of what we’re trying to do here,” he said.

Alcabes feels a connection with all the club’s like-minded members.

“We have like a brotherhood here,” he said, “It’s great.”