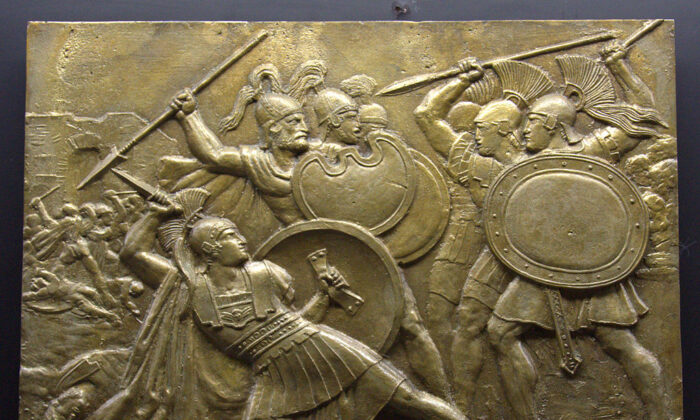 One of ten reliefs based on the Pinelli engravings (1928) of the life and the campaign of Alexander the Great. Reliefs by the sculptor Pr. Tzanoulinos (bronze). Hellenic War Museum in Athens, Greece. (Tilemahos Efthimiadis/CC BY-SA 2.0)
Arts & Culture

When high school teachers in schools today discuss Alexander the Great, it is a sad reality that most students will know very little. One student may offer an odd tidbit: “Wasn’t Alexander the Great killed by a mosquito?” Well, the ancient Greek hero may have contracted malaria from a mosquito leading to his death, but there are other equally plausible causes of his death. More importantly, is that all the student knows about one of the greatest heroes to walk the earth?!

Understanding Alexander the Great and, frankly, his awesomeness is understanding where we are as human beings. In his good qualities, we celebrate and aspire, and in his failures, we grow wiser and therefore spiritually richer.

I’ve termed Alexander the Great an ancient Greek hero, though technically he was a Macedonian, coming from that nation just north of Greece. Yet the Macedonian culture is what we generally think of as Greek culture, including speaking the Greek language, worshiping the same gods, and viewing Greeks as their compatriots in the struggle against the menacing Persians.

In the fourth century before Christ, this struggle was the defining issue of the day. Next to the relatively tiny area of Greece and Macedonia, there was the behemoth of the Persian Empire stretching from modern-day Turkey next to Europe down to Egypt in Northern Africa all the way to the Indus River in today’s Pakistan. Alexander’s people lived for centuries in the Persian Empire’s shadow, having twice been invaded in the previous century and having twice successfully turned back the Persian invaders.

To add insult to injury, the Persians quite possibly played a supporting role in the assassination of Alexander’s father, King Philip II. Thus, Alexander did the unthinkable: He took his far smaller army and—with its perfect discipline and simple yet effective fighting formation of locked shields and long spears known as the Macedonian phalanx—cut right through the Persian army in battle after battle until he was the king of world, at least as the Greeks had known the world to be.

He even went further, through the Khyber Pass in the Hindu Kush Mountains into India. He turned around only when his battered and homesick troops mutinied. Even then, he came back a different way, conquering as he went. And all of this was accomplished between the ages of 20 and 32!

Because of the success of his great undertaking, the culture of the Greek Golden Age, of Socrates’s profound wisdom (which I have previously written about), exquisitely realistic sculptures, precedent-setting architecture, and tragedies and comedies that would later inspire Shakespeare were all preserved from the threat of destruction.

Alexander also founded the city of Alexandria in Egypt that, with its vast library and 40-story lighthouse, would be the intellectual and economic center of Western civilization for centuries, leaving a cultural legacy that would be inherited by the Romans in their republic and empire. All of that, in brief, is why Alexander is great.

How Did Alexander Become Great?

How exactly the man did all that is another question. The popular narratives today gives us very little in response. On the negative side of the spectrum of these popular ideas, he was an imperialistic white man oppressing others wherever he went. On the positive side he was a carefree, flamboyant youth, driven perhaps by testosterone, with an unparalleled sense of adventure.

This latter interpretation is bolstered by the fact that out of Alexander’s extraordinary life emerged an incredible array of fabulous stories and legends. For instance, when he was a boy, an unruly horse was brought to his kingdom and shunned by his father. But Alexander keenly observed that the horse was literally afraid of its own shadow and could be settled by calmly turning it away from its shadow. The story goes that Alexander turned this wild beast into his faithful steed, Bucephalus, who followed him into battle after battle.

It is also said the Alexander, who was tutored by the ancient Greek philosopher Aristotle, was so enamored with the ancient epic poems of Homer that, when first entering the Persian Empire, he chose to land at the ancient site of Troy spoken of in Homer’s “Iliad” while his army landed elsewhere.

Later on, during his conquering, Alexander is said to have encountered the Gordian knot. It was an enormous knot of rope on an old chariot, and legend had it that whoever could untie it would be ruler of the world. Alexander took one look and then cut off the knot, successfully untying it, sort of, and leaving behind the phrase “cutting the Gordian knot”—meaning, solving a complicated problem with a solution that is simple and a bit rough.

There too is the story of Alexander meeting a homeless philosopher lying in the street, Diogenes, who asks Alexander to please stop blocking his sun. Alexander is inspired by Diogenes’s complete disregard for earthly wealth and status, so much so that he says, “If I were not Alexander, I would be Diogenes.”

Yet this enlightened, nonmaterialistic sentiment of Alexander seems contradicted by other stories of his tyrannical tendencies, such as the one in which a philosopher tells Alexander that the world we live in is but one of an uncountable number of worlds, and to which Alexander begins crying because he cannot conquer them all.

Now, whether fictional or factual, all of these are splendid flourishes in the tapestry of history. However, they don’t coherently or reliably tell us how Alexander became so great. On their own, they take us down that path of bizarre and pointless triviality, such that all a student can remember is one ridiculously insignificant possibility for how Alexander the Great died.

Therefore, it is instructive to turn our attention to the earliest historical source on Alexander the Great: Diodorus Siculus (90–30 B.C.), who was a Greek historian writing centuries before all other surviving sources. From Diodorus, we can reliably find those defining characteristics that truly present to us the story of Alexander the Great. Specifically these characteristics, or virtues, are what I term brotherhood, good manners, and faith. But what exactly do these terms mean? We will take a closer look next time.