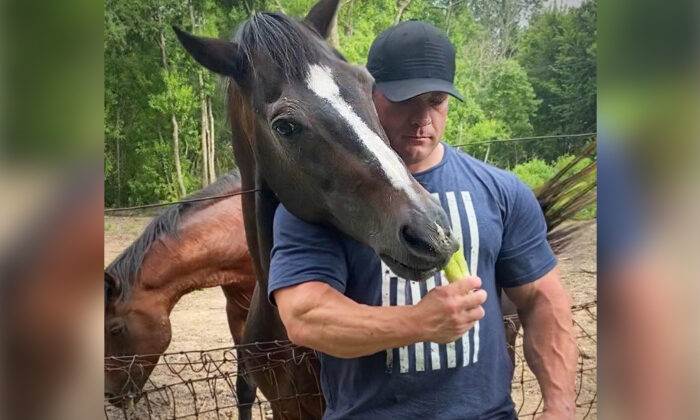 A Texas police officer came across two horses on a property that had been ravaged by Hurricane Harvey in 2017. The property was “like a swamp” and in awful condition. A concerned neighbor had called in about one horse that got stuck in a fence.

The Friendswood Police Department responded, cutting the horse free, and officer Matthew Schmidt learned the acreage’s owner was an elderly widow who, in the wake of Harvey, began living on another property, while stopping by regularly to feed the horses.

After a while, Schmidt stopped seeing the animals and assumed they’d been moved—until he saw them again in January 2021.

“I realized they were still living there,” Schmidt told The Epoch Times. “One looked really skinny.” The officer took it upon himself to start feeding them, stopping by every day—even though the Michigan native knew nothing about horses.

“I had to do some research,” he said. “Out here in Texas, there are a lot of people who are familiar with horses, so it wasn’t hard to get a good idea in terms of what they like to eat and how much food they eat.”

Every day after briefing, at about 6:30 a.m., he drives there bringing horse feed or produce. At first, the pair, who are brothers, were skittish about Schmidt but soon realized he was there to help, and they were literally eating carrots out of his hand.

“They just started getting used to me coming at that same time, and they’d recognize my patrol vehicle,” Schmidt said.

“I’m used to having a dog, so I know mannerisms of dogs, so it was interesting to see,” he added. “I could tell they were excited to see me, the way they would kind of flail their heads around and neigh and kind of gallop around, and they grew pretty fond of me.”

The policeman and horses built an incredible bond.

It didn’t take long before the horses’ protruding ribs started filling in; they began to look and act much happier and healthier.

“They’re clearly not used to getting this much attention or people caring for them,” the officer said. “So they’re enjoying it.”

Eventually, after a few months feeding them, Schmidt crossed paths with their owner, Rosan Hawkins; she was very appreciative of his looking after their welfare, as it was a struggle for her.

He saw the dilapidated state the horses’ barn was in, with sheet metal edges that could pose serious harm to them. So, he gathered a group of friends and, with Hawkins’s permission, built a new shed for them, which was completed mid July.

“When it rains, it gets real muddy and there’s no grass on the property,” he said. “So, we’ll probably be getting some loads of bank sand on the property. They love it, too, they’ll roll around in it, because it’s soft, and I think it helps keep the flies off, too.”

It’s all part of the job. The Michigan native, whose mother was a probation officer, said he was destined to join law enforcement.

Having served the Friendswood community for the past four years, Schmidt has had little trouble making new friends among locals—humans and horses alike.