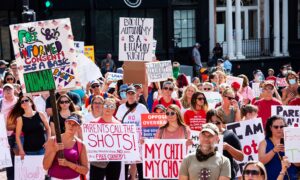 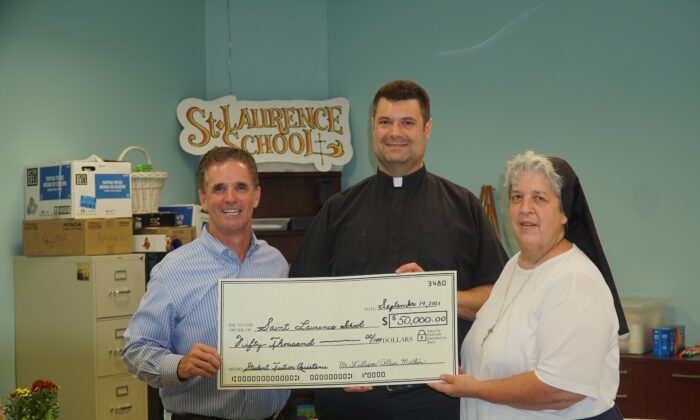 Colleen and William Mullin have donated $200,000 to three Philadelphia-area Catholic schools. They hope their money can help with students’ tuition as needed to support their finishing school.

After selling their company two months ago, the Mullin couple decided to give back to the institutions that have influenced them most in their lives.

On Sept. 16, William Mullin shared his story with The Epoch Times as he donated $50,000 dollars to St. Laurence School in Upper Darby, Pennsylvania, where he graduated in 1982.

“There [are] a lot of people and families that are suffering right now,” Mullin said. “And so we thought we’d be able to give back through tuition assistance, and allow families that maybe [are] suffering and [can’t] afford tuition right now … we can ensure that their kids [can] finish out the school year and start a new school year.”

Mullin is senior vice president and financial advisor of Wealth Enhancement Group and has raised three children with his wife. Two are in college and one is in high school.

The money will go into a pool that the school uses to give students financial aid. Depending on how much their families earn and how much they need, the students can get a discount on tuition.

Mullin is grateful for the spiritual and religious education he received at the Catholic school. “And this school has made an impact on my life, my family’s life, and it made me the person I am today.”

He said, “I hope these kids get the great experience that I had. And that was the purpose of the gift.”

Almost 40 years after he graduated from St. Laurence, Mullin still remembers one story. When he was in first grade and had a surgery, Sister Virginia Patrice called his home at 7 p.m. when he just came back from the hospital.

William’s mom told him that his first grade teacher was “checking on you to see how you are.”

Mullin said, “Normally, when a priest or a nun from your school calls the home, it’s bad news. But I’ll never forget that, you know. It was after school and she made an effort.”

Mullin also mentioned that he was fortunate to meet two of his best lifetime friends at St. Laurence school.

The Mullins hopes their donation will spur more attention, spur additional donations, and more community involvement with the school.

“People can make the bigger difference when times are tough,” Mullin said, “I think during these tough times, those of us that are fortunate enough to have the opportunity, it’s a great time to give back, make a difference, and get back to your roots. And so that’s my goal.”

With Mullin at the school were St. Laurence pastor,Father Thomas or Tom Whittingham, and St. Laurence school principal, Sister Regina Matulka. Both were highly appreciative of Mullins’ generous donation to help with student tuition.

“Just before I walked in the room, I was on the phone with a mother who’s heard the tuition goes up every year and she was working an extra job the year before in order to help pay for tuition. And with the coronavirus shutdown, that other job disappeared,” Father Tom said. “So she’s struggling to make the payments already. She was asking if there’s any additional money for help. The need is always there.”

Father Tom moved to the school three months ago. He said: “Some have knowledge, some have ability, some have wealth to share, but everything we have is given to us by God to be shared with others.”

Father Tom said that when students attend a Catholic school, their parents tend to be more involved and invested. “They often have parents that are willing to sacrifice. You can send your child to public school for free. Basically, to go to Catholic school, you usually have to pay at least something. And so the parents are invested in education, they think it’s valuable, and they want their children to succeed. So often, that translates down the road into less drugs, other vices, other problems.”

Sister Regina was pleasantly surprised by the large donation from the school’s alumni. She transferred to St. Laurence in August.

“In my past principalship, I did not receive a donation as generous and as big as this one,” she said. “So yes, it was a surprise, a very happy surprise.” St. Laurence school opened in 1919. It currently has 208 students in grades pre-K through eighth.

“Thanks to the Mullin family. That means a great deal,” Sister Regina said at the ceremony. “They said family and community was a big part of their upbringing and growing up, and we want that to continue, to be a family, whether it’s [those] present in the school or our extended family in our graduates as well.”

Mullin also donated $50,000 to Cristo Rey Philadelphia High School because he knows members on the board, including the president, from who he learnt that some students work during the week to pay their tuition.

“My wife and I want to give to someone maybe we don’t have a direct connection with, but make a difference in other people’s lives,” Mullin said.