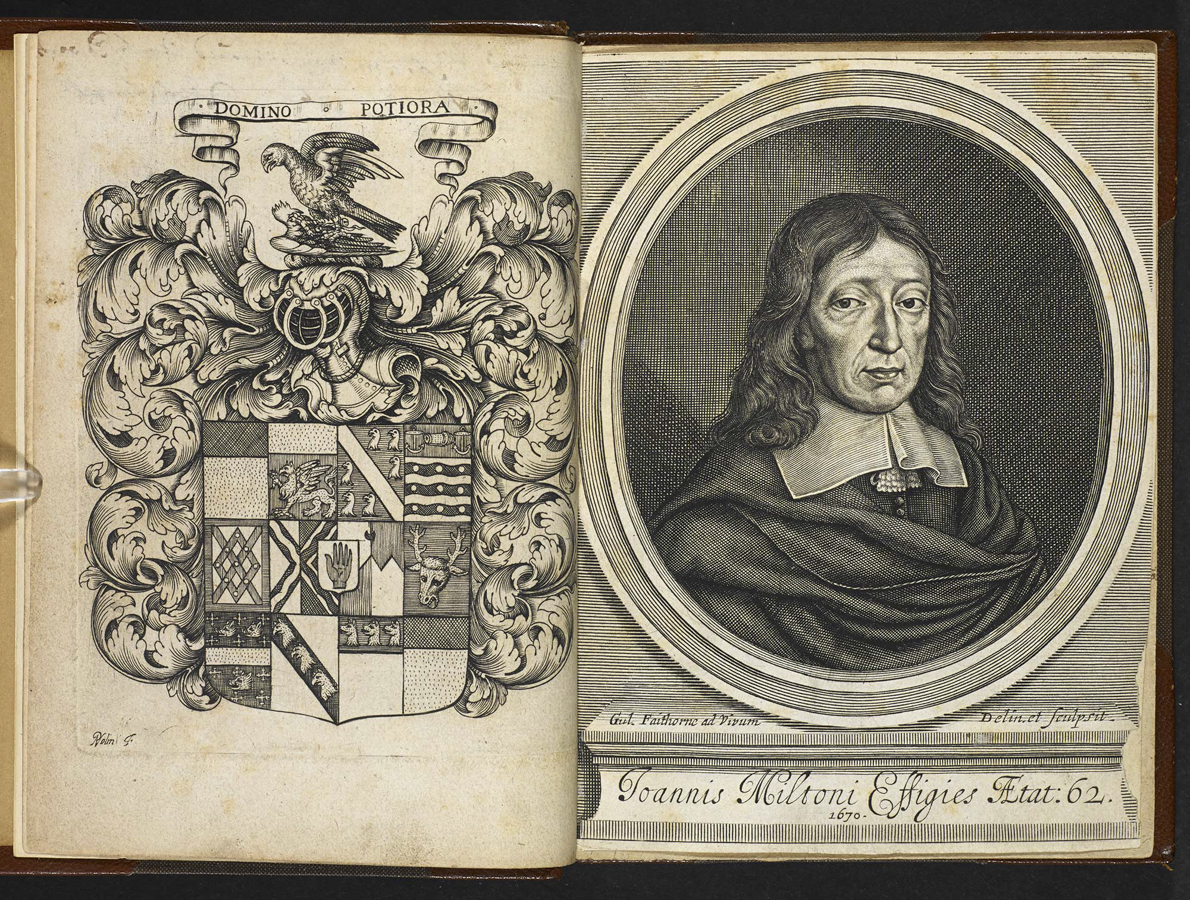 The front pages of a 1668 editon of “Paradise Lost”, with an adapted title page and a later engraving of the work’s author, John Milton, by William Faithorne. (Public Domain)
Books

Milton and the Sublime, Part 3: Enlarging Our Souls With ‘Paradise Lost’

Do we want to be better people? Do we want our character to improve? And do you want your own soul to realize its full potential? If so, then coming into contact with the sublime and specifically sublime literature can change you. Reading Milton’s “Paradise Lost” can show us the way to enlarge our own sense of being through its imaginative power.

In Part 2 of this series of articles on the sublime, we saw how Milton scaled up imagery or size as a method of creating a sense of wonder in us. But before returning to our analysis of Book 4 and more, it might be pertinent just to remind ourselves of why Longinus (whom we cited extensively in Part 1 of this series) considered this so important.

In the famous essay conventionally attributed to him, “On the Sublime,” Longinus argued that “When a writer uses any other resources he shows himself to be a man; but the Sublime lifts him near to the great spirit of the Deity.”

Keep in mind here that the word “Deity” is not predicating Christianity, since he was almost certainly a pagan. But what he is saying is that all other writing techniques outside of the “sublime” are human inventions and techniques, and have human effects. But in this one special case—the sublime—we get lifted near to the great spirit of the Deity.

This special case clearly is transformative: We cannot, our souls cannot, but be enlarged by being near Deity. We become, in short, better people—more like the divine, in fact, to the extent that we can be in this life.

And the converse is also true, as Longinus says, for he argues: “Wherever a man takes to worshipping what is mortal and irrational in him, and neglects to cherish what is immortal, these are the inevitable results.”

These “inevitable results” of neglecting the divine (and so the sublime), he defines as “Violence, and Lawlessness, and Shamelessness—engendered in the soul of pitiless tyrants.” These, then, are compelling reasons for reading and studying sublime works of literature.

It might be instructive to look a little closer at why the reference to and creation of the sign of Libra in the heavens in Book 4 (lines 774–1012; and this can easily be found online) is so potent, so astonishing, and so sublime.

The Eternal, to prevent such horrid fray,
Hung forth in Heaven his golden scales, yet seen
Betwixt Astraea and the Scorpion sign,
Wherein all things created first he weighed,

First, there is an understated astrological progression: Satan begins as a toad at the ear of Eve, the woman, who represents Astraea, the Greek virgin goddess of justice, innocence, purity, and precision.  Astraea, the perfect woman, ascends to become the constellation Virgo.

This is where Satan begins his tempting of Eve.

Following, we now come to the judgment of Satan’s power as we move from Virgo to the sign of Libra, the Scales, but proleptically leading to—as Satan eventually will effect in the poem—the next sign, Scorpio (“betwixt Astrea and the Scorpion sign,” Book 4, line 995). Scorpio has traditionally represented death, and also resurrection since the eagle is a hidden symbol associated with this sign. Thus, Milton, in describing Satan fleeing from the Garden,

The Fiend looked up, and knew
His mounted scale aloft: Nor more; but fled
Murmuring, and with him fled the shades of night. (Book 4, lines 1010–12)

also anticipates (by allusion to the Scorpio sign) the banishment of mankind from the Garden, and so too humanity’s death, both of which Satan will return to engineer. But what an astonishing progression in scale and in conception!

Satan flees, therefore, because the sign of Libra infallibly informs him that he will lose the contest; the balance will not weigh in his direction. After all, the Eternal creates in this one moment (though this is left ambiguously open) the seventh sign of the zodiac, Libra.

Thus, the scale of all this—the stars themselves acting in concert with God’s will—is nothing short of astonishing; that is, sublime. And this exactly corresponds with how, as we cited in the first part of this article, Longinus describes the effect of sublime writing: “Adding word to word, until it has raised a majestic and harmonious structure—can we wonder if all this enchants us, wherever we meet with it, and filling us with the sense of pomp and dignity and sublimity, and whatever else it embraces, gains a complete mastery over our minds?”

But this ability that Milton has to evoke the sublime in his poetry is not confined to just one short excerpt. Wherever we look, we find more examples of it. In Book 5, for example, we see another incident in which Milton astonishes us with the sublimity of his conceptions and of his writing. This time, however, rather than scaling up the size to create his effects (as in Book 4), he seems to do the reverse.

But Small Can Be Big Too!

Consider these small excerpts from Book 5 of “Paradise Lost”:

… For how shall I relate
To human sense the invisible exploits
Of warring Spirits? how, without remorse,
The ruin of so many glorious once
And perfect while they stood? how last unfold
The secrets of another world, perhaps
Not lawful to reveal? (Book 5, lines 564–70)

Here, the angel Raphael is relating to Adam what happened in heaven at the beginning that led to the fall of a third of the angels of heaven. Here, we are not starting small, in other words; we are starting at the gigantic level of billions of beings—a number beyond imagination—and beings, heavenly creatures, we can barely comprehend, as Raphael makes clear. We are entering into this world that is so incredibly above and beyond our own, our comprehension of it is going to be stretched, and we are going to be astonished!

But note what subsequently happens in the narrative:

…  This report,
These tidings carry to the anointed King;
And fly, ere evil intercept thy flight.
He said; and, as the sound of waters deep,
Hoarse murmur echoed to his words applause
Through the infinite host; nor less for that
The flaming Seraph fearless, though alone
Encompassed round with foes, thus answered bold.
Oh alienate from God, Oh Spirit accursed,
Forsaken of all good! I see thy fall
Determined. … (Lines  869–79)

Satan, having enticed a third of the host of heaven to join his banner and revolt against God, finds there is one solitary Seraph whom he cannot suborn: Abdiel. “Fly,” or run away, Satan enjoins the Seraph, lest “evil intercept thy flight.” And to this, the “infinite host”—spiritual beings and powers whom earlier we are told are “an host innumerable as the stars of night”—applauds like the “sound of waters deep, Hoarse murmur.”

Notice again the scale of it. The overwhelming scale: infinite, deep, and that threatening sense of “murmur,” often used in the sense of murmuring against someone. Here, it is against Abdiel. Satan seems to have achieved what he wanted: the acclamation and support of his followers.

And here, we now go in the reverse direction: Not bigger still or more scaled up, but instead we revert to one small human virtue, perhaps the most basic and admirable of all—courage. The pivotal virtue as Winston Churchill remarked: “Courage is rightly esteemed the first of human qualities … because it is the quality which guarantees all others.”

And where is courage most evident? When the odds are overwhelming, when the desire to go with the crowd is its most intense, when alone and without companions, we face the ultimate test. When we are small and face the big (think David versus Goliath). From the infinite host, suddenly the focus is on the Seraph, “fearless, though alone/ Encompassed round with foes.” That is a sublime moment; we are astonished at his courage.

And then the Seraph’s retort:

… For soon expect to feel
His thunder on thy head, devouring fire.
Then who created thee lamenting learn,
When who can uncreate thee thou shalt know. (Lines 892–95)

He answers Satan, not only revealing his bravery but also his faith: “Soon expect to feel.” The Seraph’s certainty of knowing what will happen before it happens is based on the nature of inexorable reality, or in this case, the nature of God.

So spake the Seraph Abdiel, faithful found
Among the faithless, faithful only he;
Among innumerable false, unmoved,
Unshaken, unseduced, unterrified,
His loyalty he kept, his love, his zeal;
Nor number, nor example, with him wrought
To swerve from truth, or change his constant mind,
Though single. From amidst them forth he passed,
Long way through hostile scorn, which he sustained
Superior, nor of violence feared aught;
And, with retorted scorn, his back he turned
On those proud towers to swift destruction doomed. (Lines 896–907)

One could spend a whole article simply describing the brilliance of these two sentences (yes, only two!): The verbal felicities like the alliteration, the diction with its contrasting mono- and polysyllabic words, and the wonderful, winding syntax that leads to that terrifying last line.

But we conclude by referring back to Longinus, where we started. For Longinus said: “Sublimity is, so to say, the image of greatness of soul.” And when we read sublime material, we too are enlarged, our souls become bigger, and we become better people, even if by almost imperceptible increments. And this is why it is important to insist at all times that the sublime be at the heart of our educational system. For through it, our eyes are opened and lifted up to that which is greater than we ourselves are.

Part 1 of “Milton and the Sublime” explores sublimity in poetry. Part 2 looks at how “Paradise Lost” astonishes readers.

James Sale
Follow
James Sale has had over 50 books published, most recently, “Mapping Motivation for Top Performing Teams” (Routledge, 2021). He has been nominated for the 2022 poetry Pushcart Prize, won first prize in The Society of Classical Poets 2017 annual competition, performing in New York in 2019. His most recent poetry collection is “HellWard.” For more information about the author, and about his Dante project, visit EnglishCantos.home.blog
SHARE
Friends Read FreeCopyFacebookTweet
SHARE
Friends Read FreeCopyFacebookTweet
You May Also Like