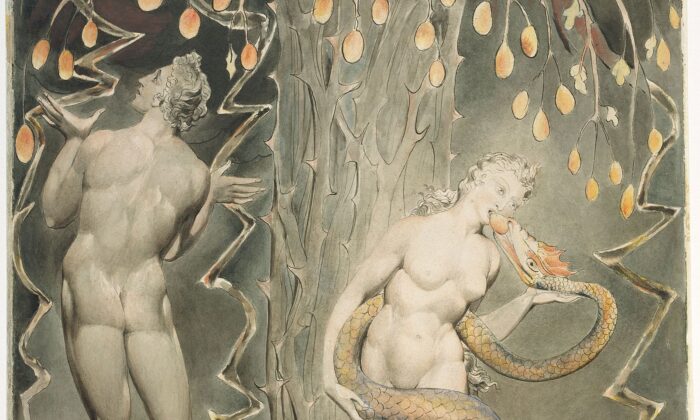 Milton and the Sublime, Part 2: The Power of ‘Paradise Lost’ to Astonish

In Part 1 of this article, we looked at how Keats in his poem “On First Looking Into Chapman’s Homer” established a moment of pure sublimity in its final line; we looked at how he did this. The poem’s structure is a movement: from mentioning something very small, a book, to something much bigger, a peak in Darien, which seemed to represent the very height of thinking or of ego. But this peak was dwarfed in size by the next mention, the Pacific Ocean—the unconscious, perhaps—the enormity of which stilled the critical faculty into silence and left Cortez and his men, like us, stupefied in wonder. In other words, the poem left them and us experiencing the sublime.

Keats is certainly a great poet, but now we come to one of the world’s greatest masters: John Milton and his “Paradise Lost.” Here, we don’t deal with sublimity in a line or two, but in huge stretches or chunks of writing in which the sublime is consistently maintained. So, I hope you will want to read the whole excerpt for yourself (“Paradise Lost,” book 4, lines 774–1012), and this can easily be found online. I shall, I hope judiciously, select some choice excerpts from this passage to make my points.

To quote Dr. Samuel Johnson, and to give what I consider to be a true flavor of Milton’s poem, consider this: “The characteristic quality of his poem is sublimity. He sometimes descends to the elegant, but his element is the great. He can occasionally invest himself with grace; but his natural port is gigantic loftiness. He can please when pleasure is required; but it is his peculiar power to astonish.”

How, then, does Milton do this?

This excerpt I have chosen begins at a highly significant and charged moment: Satan has escaped from Hell, crossed the void of Chaos and Anarchy, and arrived in Paradise, the Garden of Eden. We almost sympathize with him as he grieves to see the innocence before him, and which he has lost, but which he is determined to corrupt.

Meanwhile, now aware of Satan’s forbidden presence in the Garden, the archangel Gabriel leads a force of angels to apprehend him. Two of them, Ithuriel and Zephon, searching the Garden, suddenly come across Satan, but not as they—or we—expect him:

“… these to the bower direct
In search of whom they sought: Him there they found
Squat like a toad, close at the ear of Eve,
Assaying by his devilish art to reach
The organs of her fancy…”

Unexpectedly, the great adversary of God Almighty is “squat like a toad” at the ear of Eve. In this one compressed image—compressing the very frame and form of Satan—we perceive how changed he is, how far fallen from the great “hero” who fought in heaven’s fields.

Indeed, the angels aren’t sure who they have encountered:

“Him thus intent Ithuriel with his spear
Touched lightly; for no falsehood can endure
Touch of celestial temper, but returns
Of force to its own likeness: Up he starts
Discovered and surprised. As when a spark
Lights on a heap of nitrous powder, laid
Fit for the tun some magazine to store
Against a rumored war, the smutty grain,
With sudden blaze diffused, inflames the air;
So started up in his own shape the Fiend.
Back stepped those two fair angels, half amazed
So sudden to behold the grisly king;
Yet thus, unmoved with fear, accost him soon.”

The “spear” that touches lightly in this case is “truth,” which “no falsehood can endure.” Under its touch, Satan must appear as he is. What brilliant and surprising imagery: “spark … lights … nitrous powder” and then the rumor proves true. Satan has brought the war to Paradise. This is not a toad, and as the “smutty” (like a bad firework) grain explodes, we see him. Note how “inflames the air” not only connotes the firing of gunpowder but also has that secondary sense of “inflammation”: Wherever he is, Satan causes inflammation of the system.

The toad has now become the “grisly king”—normal size, as it were. And this is where we begin to see the parallel with Keats’s poem. Like the book in Keats, we now have the toad in Milton—both are small things that suddenly increase in size. In Keats, the book inflates to the mountain peak on Darien; in Milton, we have the toad become the full-sized devil himself.

But then they exchange words. Satan is not going to come along easily! A brilliant exchange of sarcasm and threats ensues, and Gabriel joins the fray:

“So threatened he [Gabriel]; but Satan to no threats
Gave heed, but waxing more in rage replied.
Then when I am thy captive talk of chains,
Proud limitary Cherub, but ere then
Far heavier load thyself expect to feel
From my prevailing arm, though Heaven’s King
Ride on thy wings, and thou with thy compeers,
Used to the yoke, drawest his triumphant wheels
In progress through the road of Heaven star-paved.
While thus he spake, the angelic squadron bright
Turned fiery red, sharpening in mooned horns
Their phalanx, and began to hem him round
With ported spears, as thick as when a field
Of Ceres ripe for harvest waving bends
Her bearded grove of ears, which way the wind
Sways them; the careful plowman doubting stands,
Left on the threshing floor his hopeless sheaves
Prove chaff. On the other side, Satan, alarmed,
Collecting all his might, dilated stood,
Like Tenerife or Atlas, unremoved:
His stature reached the sky, and on his crest
Sat Horror plumed; nor wanted in his grasp
What seemed both spear and shield: …”

In this excerpt alone, can one not feel the heroic pulse of the verse as two great adversaries confront one another? I particularly love that detail “While thus he spake, the angelic squadron bright/ Turned fiery red, sharpening in mooned horns/ Their phalanx, …” The fiery red, the color of blood and war.

But notice again that as we are propelled toward some almighty bust-up—a classic fight perhaps between such as Achilles and Hector, or Aeneas and Turnus—the scale is suddenly increased yet again:

“… Satan, alarmed,
Collecting all his might, dilated stood,
Like Tenerife or Atlas, unremoved:
His stature reached the sky …”

Suddenly, from being merely devil-sized, he is now “dilated” like a giant mountain, like a Titan (as Atlas was), enormous in strength and power. And this corresponds to the third transmutation in Keats’s poem. In Keats we have the book, the mountain Darien, and then the Pacific Ocean. Here we have the toad, the devil-sized Satan, and finally the mountain tall as the sky in this epic confrontation. These changes in scale, whether we are conscious of them or not, excite us and begin to amaze us, too. Where will this end?

I ask this question, of course, because in Keats’s poem it led to what might almost seem an anticlimax: silence upon a peak. But it is not an anticlimax; on the contrary, as I have shown, it is an astounding ending and resolution. And here, Milton does not disappoint either because if the fight had actually occurred, then it is highly likely that we, as readers, would be disappointed; instead, what Milton does is introduce a fourth level of scale and transformation!

When The Eternal Enters the Fray

Satan is all worked up, ready to slug it out, but Gabriel is clearly “in the moment,” alert to all the signs—whatever they be—of the cosmos, and looking “up” so spies:

“The Eternal, to prevent such horrid fray,
Hung forth in Heaven his golden scales, yet seen
Betwixt Astraea and the Scorpion sign,
Wherein all things created first he weighed,”

We get the amazing sense that to prevent the destruction of Earth in such a “horrid fray,” The Eternal creates in this one moment (though this is left ambiguously open) the seventh sign of the zodiac, Libra.

Aside from anything else, the sheer concept of it is sublime. Just imagine it: Dwarfing in size Atlas or Earth itself is a sign from Heaven. (Keats, too, packs into his poem an astronomical reference to the planet Uranus, recently discovered at the time, though it isn’t as critical or sublime as in Milton’s usage for various reasons.)

Surely, this is the highest form of poetry, and like some incredible Gothic cathedral is not the result of chance or random ideas or jottings, but of inspiration and technique.

In my third article in this series on the sublime, we will look at some amazing aspects of this fourth level of transformation, as well as how Milton achieves the sublime in an almost reverse way as well.

Part 1 of “Milton and the Sublime” explores sublimity in poetry.