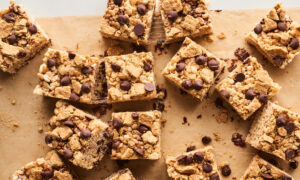 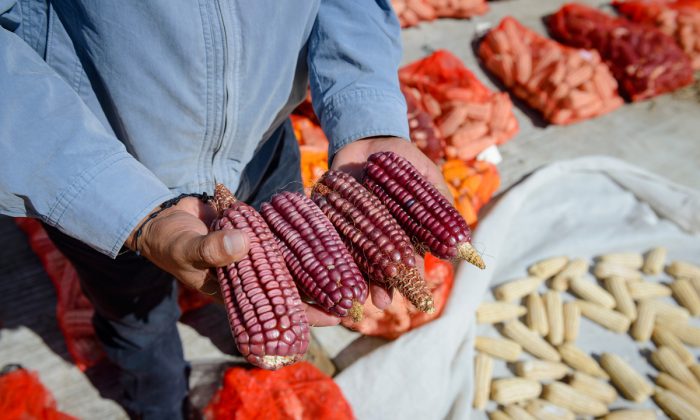 You may only have a few fresh ears per year, but chances are you still eat a ton of corn. It’s in almost everything. Corn plays a starring role in chips and cereal, but is more often a supporting player, functioning as a sweetener, oil, or starch.

Corn has been cultivated throughout the Americas for nearly 9,000 years. The Olmec, Maya, Aztec, and other pre-Colombian people built great civilizations on a corn-rich diet. Corn began with a wild grass, from which ancient farmers carefully developed varieties for superior taste and nutrition. Today we call these prized breeds heirlooms.

Over the last few decades, however, corn cultivation has taken a decidedly different turn. Advanced breeding methods have created hybrids with enormous yields, built-in pest resistance, and a greater concentration of sugars.

According to world-renowned chef Roberto Santibañez, these technological innovations have taken away something vital.

“Corn is no longer real food,” he said. “It is just a surplus of carbohydrates floating around the world.”

Santibañez is serious about corn. At Fonda—his farm-to-table Mexican restaurants in New York City—kitchens crank out about a million handmade tortillas a year. But unlike typical white tortillas made from conventional corn hybrids, Fonda’s may be shades of red or green, depending on the heirloom variety available.

“I don’t care what the color of my tortillas are any given day,” Santibañez said. “Even if you have a really, really small producer who only has a few bags, we buy them. We’ve been very successful with it. People are very happy.”

Heirloom tortillas cost about five times more than those made with conventional corn, but Santibañez said it’s worth it.

“It’s better for you because it’s real corn,” he said. “It’s not corn that has been genetically modified to produce sugar and syrups. It’s corn that was meant to feed you as a wholesome cereal just like wheat in Mesopotamia, rice in Asia, and potatoes for Peru. You can’t feed a civilization off of the sweet variety of corn that has been developed here in the United States.”

Corn is by far America’s biggest and most lucrative legal crop. Because corn enjoys such massive government subsidies, it’s cheap, and therefore a favorite ingredient of U.S. food manufacturers.

U.S. farmers grew 84 million acres in 2013 according to the U.S. Department of Agriculture, but we only eat about 15 percent. Most is used to feed livestock. About 40 percent is grown for ethanol.

Much of U.S. grown corn is shipped to other countries. Mexico, the birthplace of corn, now gets most of its supply from the United States thanks to NAFTA.

Yet millions of Mexicans still farm corn the old fashioned way. Their plants are smaller. The ears have funky, irregular kernels that come in a rainbow of colors. Crops are tiny in comparison to U.S. hybrids, but this corn has vitamins, minerals, carotenoids, amino acids, and flavors you won’t find in modern varieties.

Santibañez has long dreamed of serving heirloom corn tortillas at his restaurants, but only recently has it become a reality. Last year, Fonda teamed up with Masienda—a Manhattan-based heirloom corn import company that buys directly from independent Mexican farmers.

Masienda provides the missing link between Mexican corn growers too small for the major markets and restaurants seeking a superior product.

“That made everything easier,” said Santibañez.

Jorge Gaviria, president and founding partner of Masienda, currently works with over 200 farmers, and growing.

“We’d like to be able to support as many farmers as we can that are growing exceptional seeds, not just because of the product itself but because there is a real economy that can be forged,” Gaviria said. “This is more than a niche. We’re hoping we can develop something significant and hopefully push back time a little bit where corn was a very viable source of nutrition.”

But Gaviria believes that if chefs get excited about it, everyone else is likely to follow suit.

“I think with any cultural phenomenon this is something that typically starts at the top, and works its way throughout the rest of culture,” he said. “I’m expecting the same thing to happen with heirloom corn as well.”

Mexico may seem like a long way to go when America is the modern corn king. But Mexican grown corn has distinct advantages.

For example, unlike the United States, Mexico does not permit farmers to grow corn with genetically modified organisms (GMOs), because it has been shown to contaminate non-GMO varieties.

Due to pressure from the biotechnology industry, the Mexican government had previously allowed transgenic corn crops on a trial basis. But many feared the experiment would ruin precious heirlooms. In 2013, a judge in Mexico City banned GMO corn farming due to “the risk of imminent harm to the environment.”

The other big draw Mexico has in its favor is the ultimate corn climate. Gaviria calls his product “landrace” corn, which means not only an exceptional breed, but grown in its native land.

Modern corn is primarily bred to produce maximum product, but Gaviria said it has been at the expense of the good stuff. “There is so much flavor and nutrition to be gleaned from corn. But not the corn we’re growing currently, and certainly not the way we’re processing it,” he said.

Gaviria said that it’s not just the quality, but the preparation that makes corn nutritious. Traditionally, field corn is turned into nixtamal before eating.

We’re most familiar with fresh corn, which requires little preparation. However, the vast majority of crops (about 99 percent) are known as dent or field corn. These ears have hard kernels that are made into animal feed or ground into flour to make polenta and a plethora of corn-based foods.

To make tortillas, however, field corn requires a special process that turns raw kernels into nixtamal.

The word “nixtamal” comes from the Nahuatl language of the Aztecs. It’s a combination of the words nextli (meaning “ashes”) and tamalli (“corn dough”).

The process involves cooking kernels in a solution of water and powdered limestone (calcium hydroxide). A chemical reaction softens the field corn’s hard shell so it’s easy to remove. Whole, nixtamalized kernels are called hominy, which is used to make the traditional Mexican soup pozole, or ground to make masa dough for tortillas and tamales.

Nixtamalization not only turns corn into a pliable product, it makes the grain much more nutritious. The human body can’t absorb many of corn’s important nutrients (such as niacin, tryptophan, and most of its calcium) until it becomes nixtamal.

History has shown that a steady diet of corn that has not gone through this process can lead to disastrous consequences. When Spanish conquistadors brought corn back to the new world, they left nixtamalization behind. This wasn’t much of problem when corn was sampled as a new curiosity. But for regions in Europe and Africa that later adopted corn as their new main grain, populations suffered from pellagra—a disease of malnutrition characterized by the three D’s: diarrhea, dermatitis, and dementia.

Modern corn products are fortified with nutrients to avoid problems, but much of the corn’s own nutrition is wasted with this strategy.

The only special ingredient you need to make nixtamal is powdered lime (labeled “cal” in Mexican groceries), but the technique takes time to refine. Santibañez sends his kernels to Tortilleria Nixtamal in Corona, Queens. Unless you make it yourself, this seems to be the only place in New York to buy fresh masa. Today, Tortillería Nixtamal produces about 10,000 fresh tortillas a day and dough for over 100 restaurants and grocery stores across the city.

Santibañez said they have to make a few adjustments for the heirloom kernels. “It’s a little bit like the guy roasting coffee. He smells it and touches it and makes sure it has the right scent. The nixtamal maker does the same thing,” he said. “He touches and squeezes a kernel and makes sure that it’s right.”

Tortillería Nixtamal co-owner Shauna Page said that Mexican corn makes a softer masa than U.S. corn. She said it’s because U.S. corn (mostly from Iowa and Illinois) is bred to deal with a much colder climate than Mexico.

Santibañez’s tortillas are a unique experience. They are served in a small covered basket. When the lid is lifted, a warm, nutty aroma emanates.

On this particular day, the tortillas come in two shades: a dusky rose made from purple corn from Oaxaca, and the other a blue-green-gray color made from Michoacán blue corn. Some taste nutty, others wheaty.

The first round of tortillas at Fonda are free, but it costs $1.50 to get four more. The extra charge compensates for the added price of heirloom corn, but Santibañez said his customers are happy to pay it.

“The people that know will certainly appreciate that our tortillas are better than anyone else’s around,” he said.

The higher price of heirloom corn may seem like too big a risk for many Mexican restaurants struggling to pay New York City rent. But Santibañez is optimistic that his tortillas could set a precedent.

He recalled when the sight of a traditional mortar and pestle, or molcajete, was a novel sight in the city, introduced back then by Josephine Howard at Rosa Mexicano. Now they are commonplace.

Channaly Philipp contributed to this report