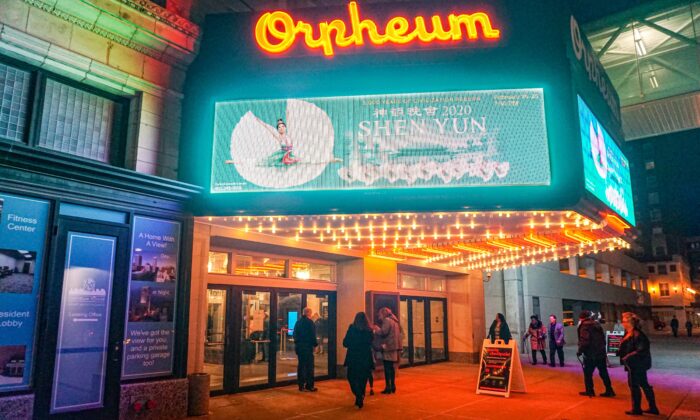 OMAHA, Neb.—The curtain rises on a scene in another land. A man who holds a stable job, status, and good income helps his younger brother buy a beautiful flower for the girl he fancies. But then, the elder brother’s boss orders him and his colleagues to attack the girl on the grounds of her faith. The younger brother steps in to defend her, only to be shocked when he finds himself face to face with his beloved sibling.

This is the story that touched advertising firm owner Robert Richardson of Nebraska the most in Shen Yun Performing Arts‘ stage production when he attended at the Orpheum Theater on Feb. 26, 2020. Out of its roughly 20 vignettes, New York-based Shen Yun chooses themes gathered from throughout China’s 5,000-year history as well as significant present-day events. Richardson felt it was a beautiful show and enjoyed seeing principles like family, independence, and freedom returning to Chinese culture and spreading around the world.

Some stories in Shen Yun are legends, but the drama of the brothers is a scene that is all too real inside China today. There, the Chinese Communist Party employs security forces to carry out a campaign of eradication against religious believers and spiritual practitioners such as followers of Falun Dafa.

“I think as with any communist regime,” Richardson began, “the totalitarian society of understanding the rights of the people, you know, it can be very—dramatic. And from family members being separated and everything else, so. And my daughter’s from South Korea. … She had to face that from North Korea as well. So it’s a very cruel world over there.”

In real life, as well as on stage, the fate of the brothers is heartbreaking but ultimately hopeful. Falun Dafa practitioners and those who defend them endure indescribable torture in prison for adhering to their beliefs. In “Abetting the Wicked,” the brothers’ piece that so moved Richardson, the younger brother suffers at the hands of the communist regime. But in the end, the dance story depicts an ancient Chinese belief that the Creator will return to earth to reward those who choose good over evil, and there is hope and redemption.

“I thought it was a beautiful demonstration of freedom,” Richardson said about the stories in Shen Yun.

“People forget, need to be reminded,” Richardson said about the effort by communism to wipe out humanity’s spirituality. “And I think the same thing’s happening to our country where we’ve, where our grandparents and fathers have fought foreign wars to stop that and I see that coming to our country now because people forget of what this country represents.”

About Shen Yun’s portrayal of heaven interacting with the earth, and the group’s effort to breathe new life into the spiritual side of our societies, Richardson said, “I don’t understand all [of it], but I’m learning. I like it … It’s good.”

With reporting by Stacey Tang and Brett Featherstone.