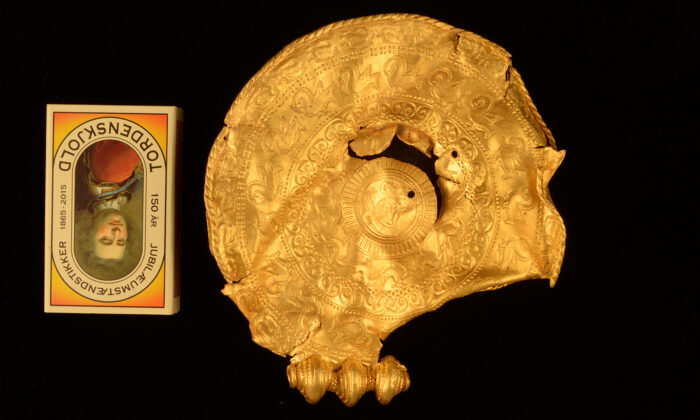 Man With Metal Detector Finds Trove of Huge Gold Medallions Dating Back 1,500 Years Ago in Denmark

In a time of calamity in Denmark, some 1,500 years ago, an enormous hoard of gold was buried under the earth by an Iron Age chieftain, it’s believed. It might have been to sacrifice to higher powers, or perhaps to save it from being captured in war, that the gold was entombed.

Recently, that hoard was found.

The find has been called by VejleMuseerne “one of the greatest gold treasures in Danish history.”

Experts from VejleMuseerne and the National Museum excavated the cache—comprised of huge, beautifully decorated medallions (or bracteate), Roman coins, and jewelry in a find that is unique in Danish history. All of which was buried in what was once a longhouse in a village, and demonstrates that Vindelev was a center of power in the late Iron Age, VejleMuseerne stated.

The chieftain who owned the gold may have buried it around the year 536 A.D., when a volcano erupted and spewed ash into the atmosphere, causing an environmental and agricultural catastrophe that led to crop failure and famine, altering the course of Danish history. The chieftain’s intention might have been to hide the gold from enemies or appease the gods, the statement said.

This time period may have also coincided with the formation of Viking Age civilization and the united Danish Kingdom. “The fascinating journey of the gold tells us about a European continent that already in the Iron Age was closely connected by trade and war,” the museum said. “Many of Scandinavia’s largest gold finds date from the middle of the 5th century.”

One of the bracteates bears the design of a male head with a braid, who appears to interact with a bird. Under the head, the image of a horse is depicted with a runic inscription between its muzzle and forelegs, which, according to a preliminary translation, reads “houaʀ,” or “the high one.” That name could refer to whoever owned the gold, but could alternatively denote the god Odin.

Additionally, the hoard includes much older coins from the Roman Empire, including a heavy gold coin issued by Emperor Constantine the Great—who reigned from 306 to 337 A.D., and declared tolerance for Christianity in 313. Included in the find were Roman coins made into jewelry—comparable examples of which have not been seen before in their combination and use of technique.

To date, over 40 kilograms (88 pounds) of gold from the Iron Age have been found in Denmark, with the markedly unique find in Vindelev standing out foremost among them. A couple of years ago, VejleMuseerne archaeologists excavated another gold stash from the same period on the small island of Hjarnø in Horsens Fjord.

The collection of Iron Age gold artifacts is set to be placed on display in February of next year as part of the VejleMuseerne’s extensive Viking exhibition.