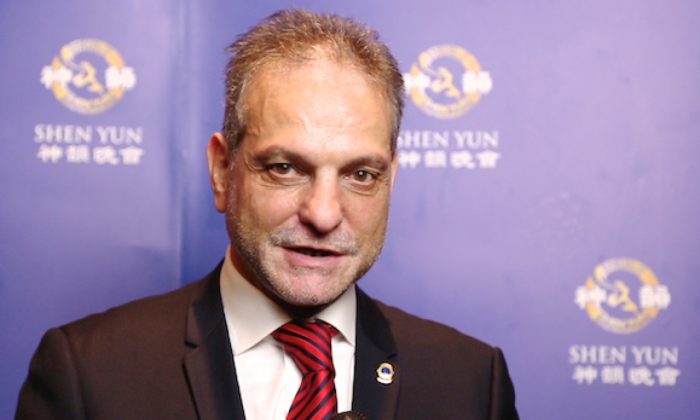 PARIS—Lions Clubs members like the outdoors and sharing values. Mr. Guy-Bernard Brami, the Lions Club governor of the Ile de France Ouest district, came to the opening of Shen Yun Performing Arts in Paris “to support this magnificent culture that we know so little about in Europe. The profound Chinese culture is fog like and we still have lots to learn from it,” he said.

Two points in particular touched him: firstly, the orchestra that is “sensational” – it combines the oriental and occidental classical instruments and a highlight was a ‘surprising Tenor.”

He said, “We discover what was really good from what is really evil, the ancient beliefs that are transmitted. And it’s this transmission that we have to favour nowadays … these ancestral roots, the cultures of all the different regions in China.”

After a two-hour journey, the Lions Club district governor left with “the sensation of flying, the impression of having travelled without leaving his seat. Tonight, you have taken me where I never imaged going. It has given me a world of good.

“It really is a magnificent show that I would recommend to all those who want to discover the Chinese culture that is really like what one would expect it to be; it’s like what we read in books and what we imagine being the real Chinese culture, long before the totalitarian regimes.”

He thought the values of sharing and humanity are exactly the values of the members of the Lions Club, “The spirit of understanding between different populations.”