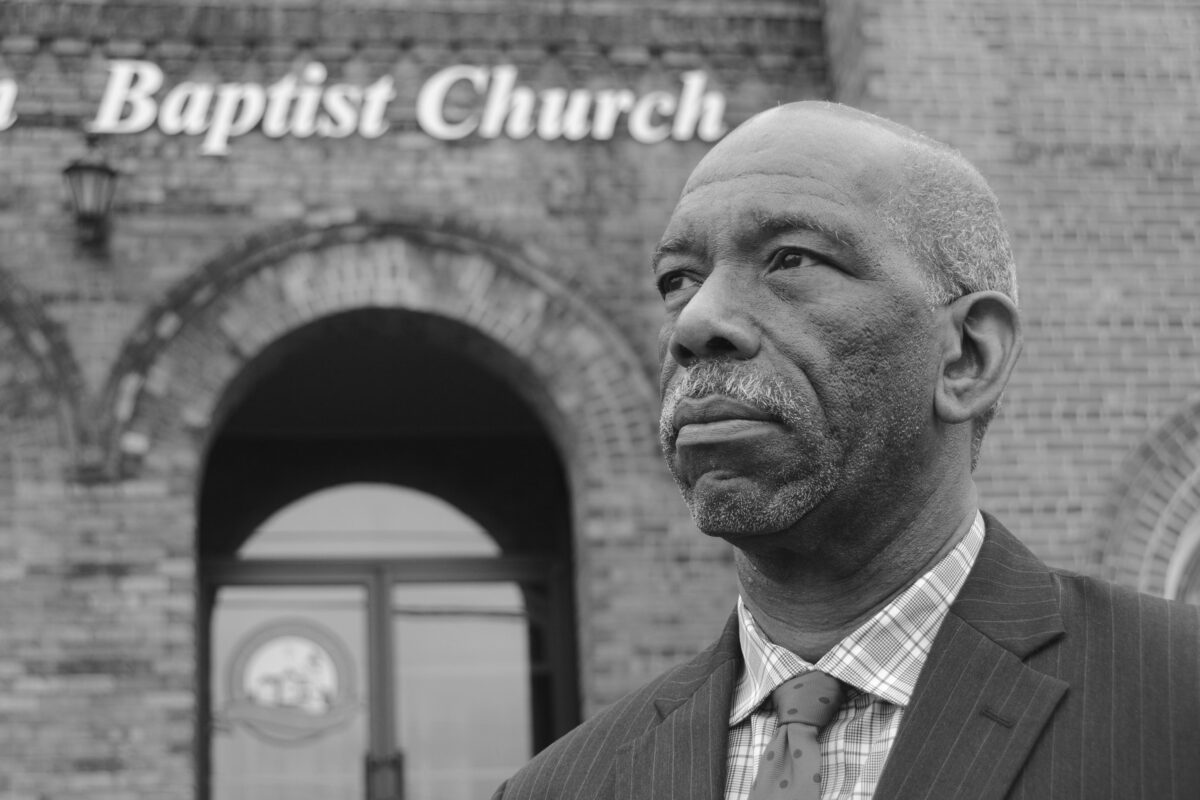 Tucked away in the West End neighborhood of Tuscaloosa, and next to what used to be a hugely popular local attraction, Maggie’s Diner, sits a humble white brick barbershop, complete with a spinning barber pole. From the outside, the shop does not hint at the treasures found inside. Beyond the old barbershop chair, and beyond the mirrors and trimmers and towels and hair solutions and shaving foam, a collection of photographs from the civil rights movement, newspaper clippings, and memorabilia from the 1960s is hanging on the walls. Among the old black-and-white photographs—turning yellow with the passage of time—are several of Dr. Martin Luther King, Jr. and other movement leaders during their time in Alabama.

The barbershop was owned by Rev. Thomas Linton, who passed away on May 14, 2020, but his legacy in preserving the history of the civil rights movement will remain. His role in the Bloody Tuesday events in Tuscaloosa will endure as a bright light in the struggle for equality. Linton’s Barbershop served as a shelter for protesters on Tuesday, June 9, 1964. The protesters had wanted to make a stand against segregated drinking fountains and restrooms. They were met with furious white police officers and citizens outside First African Baptist Church, which was located near the barbershop.

That historic day happened a year before the infamous Bloody Sunday in Selma, Alabama. The city of Tuscaloosa, along with the Tuscaloosa Civil Rights & Reconciliation Foundation (TCRRF), are in the process of cataloguing Linton’s lifetime collection of photographs and mementos and turning the historic barbershop into a museum.

TCRRF co-president Tim Lewis is coordinating the effort. “We’re gathering all the resources for what is going to be a pretty time-consuming process. It will take a while to go through Rev. Linton’s huge collection of civil rights history,” Lewis said. “The photographs and newspaper articles he had framed preserve a significant story.”

Lewis and the TCRRF are working to designate a handful of landmarks around Tuscaloosa, including Linton’s Barbershop, as part of the Tuscaloosa Civil Rights History Trail. The trail also includes a stop at the First African Baptist Church.

“First African Baptist Church was established in 1866,” Lewis said. “It was the site of that horrible Tuesday in 1964 when many civil rights leaders were attacked and beaten. Linton’s Barbershop was instrumental in shielding the protesters that day.”

On Bloody Tuesday, 33 men, women, and children were taken to the hospital, and 94 were arrested. The incident took place a year after Alabama’s governor George Wallace stood at the door of Foster Auditorium in a failed attempt to prevent two African-American students from attending the University of Alabama.

“We are trying to establish a trail here to show the world the role Tuscaloosa played in the civil rights struggle,” Lewis said. The First African Baptist Church was the home of Rev. T.Y. Rogers Jr., who was a leader during the civil rights movement and also a close friend of Dr. King,” he added. “The Civil Rights Trail of Tuscaloosa will preserve these important stories.”

Lewis wants the memory of Bloody Tuesday to be a lasting legacy for equality, diversity, inclusion, and tolerance. He takes this mission on a personal level. “I’m involved in this effort because deep down, I believe we need to remember our past, but not dwell on it and not repeat it,” Lewis said. “By being engaged and by making sure we have an authentic story that’s told, we make sure that we don’t repeat the same mistakes of the past. As we look to the future, we can move together as one.”

Editor’s note: This writer interviewed Rev. Thomas Linton at his barbershop in 2017. What follows are segments from that interview.

Rev. Thomas Linton moved the buzzing trimmer around his client’s head with the precision of a surgeon. He was intently focused on the neat lines he was making—a zigzag of sorts. The man in the ancient barbershop chair continued to smile into the mirror in approval. Rev. Linton himself does not have much hair left. The thin rim around his head is white, indicating decades of a life devoted to his ministry, family, job, and the civil rights struggle.

Rev. Linton has many memories of that turbulent time in Alabama, but the day he remembers the most was Bloody Tuesday. “We marched from the church to the courthouse, and when we got to the steps, they arrested about seven or eight ministers. We didn’t realize that a white congregation lined up with baseball bats and billy clubs was waiting for us. I got a call around ten o’clock saying, ‘You need to get down here,’ so I came in the shop through the back door. You couldn’t even get in because of all the people and kids on the floor bleeding and screaming.”

Linton grew up in Tuscaloosa during a contentious time among blacks and whites. No one knew what would happen, and everyone acted according to their own set of standards and parameters. Without knowing its value in the future, Rev. Linton collected memorabilia of that era and hung it on the walls of his barbershop. This collection is now marked to be a museum and a part of the Tuscaloosa Civil Rights History Trail.

Rev. Linton was a personal friend of Dr. Martin Luther King Jr. Witnessing the bloody chaos of that day, he reached out to his friend.

“I called Dr. King and told him what happened. He told me he had to call his friend in D.C. I was spotted by a police officer who yelled, ‘Come back here. We’ve been looking all over town for you.’ I ran over to a friend’s house and ran up the steps. The police officer got off his motorcycle and ran up behind me.'”

Rev. Linton put away his buzzer and took off the towel he had draped over his client’s shoulders. The man took a look in the mirror, turned his head to the right and left, then nodded in approval. Rev. Linton continued, “I will never forget that day. My barbershop is a memory of that day. And you know what? Those memories on the wall right here are important. I see young people and kids walk in, look at the walls, and ask me questions. It’s important to remember days like that so we don’t repeat them; I don’t want to live through that again, I don’t.”