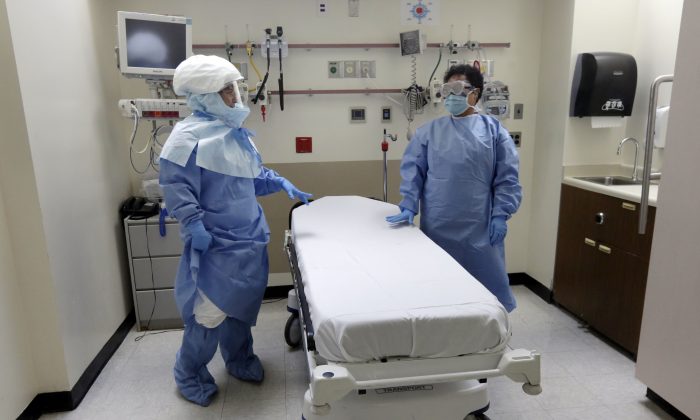 FILE - In this Oct. 8, 2014, file photo, Bellevue Hospital nurse Belkys Fortune, left, and Teressa Celia, Associate Director of Infection Prevention and Control, pose in protective suits in an isolation room, in the Emergency Room of the hospital, during a demonstration of procedures for possible Ebola patients in New York. A doctor who recently returned to New York City from West Africa is being tested for the Ebola virus. The doctor had a fever and gastrointestinal symptoms and was taken Thursday to Manhattan's Bellevue Hospital. (AP Photo/Richard Drew, File)
Health News

People are living much longer worldwide than they were two decades ago, as death rates from infectious diseases and cardiovascular disease have fallen, according to a new, first-ever journal publication of country-specific cause-of-death data for 188 countries.

Causes of death vary widely by country, but, at the global level, drug use disorders and chronic kidney disease account for some of the largest percent increases in premature deaths since 1990. Death rates from some cancers, including pancreatic cancer and kidney cancer, also increased. At the same time, countries have made great strides in reducing mortality from diseases such as measles and diarrhea, with 83% and 51% reductions, respectively, from 1990 to 2013.

Published in The Lancet on December 18, the study, “Global, regional, and national age-sex-specific all-cause and cause-specific mortality for 240 causes of death, 1990-2013: a systematic analysis for the Global Burden of Disease Study 2013,” was conducted by an international consortium of more than 700 researchers led by the Institute for Health Metrics and Evaluation (IHME) at the University of Washington.

The average age of death increased from 46.7 in 1990 to 59.3 in 2013, as a result of declining fertility and a demographic shift in the world’s population to older ages. Partly because of global population growth, the number of deaths in both sexes for all ages combined increased from 47.5 million to 54.9 million.

The number of people dying from certain conditions, such as heart disease, has increased as population has increased, but decreases in age-specific mortality rates for these conditions is a sign of progress. Death rates from most cancers, including breast cancer, cervical cancer, and colon cancer, have decreased, but the reverse is true for pancreatic cancer, kidney cancer, and non-Hodgkin lymphoma.

“People today are less likely than their parents to die from certain conditions, but there are more people of older ages throughout the world,” said IHME Director Dr. Christopher Murray. “This is an encouraging trend as people are living longer. We just need to make sure we are making the right health policy decisions today to prepare for the health challenges and associated costs that are coming.”

Disparities remain across age groups and countries. In all age groups except 80 and older, mortality has decreased more for women than men. Men aged 30-39 and over 80 showed some of the smallest declines in mortality. The gender gap in death rates for adults between the ages of 20 and 44 is widening, and HIV/AIDS, interpersonal violence, road injury, and maternal mortality are some of the key conditions responsible. For children under 5, diarrheal diseases, lower respiratory tract infections, neonatal disorders, and malaria are still among the leading causes of death.

Given the size of India’s population in particular, and projections that it may soon become the world’s most populous country, mortality trends there have global implications. In 2013, India accounted for 19%, or 10.2 million, of the world’s deaths. The country has made great strides in reducing both child and adult mortality since 1990. The average yearly rates of decline in mortality have been 3.7% per year for children and 1.3% per year for adults. Between 1990 and 2013, life expectancy at birth increased from 57.3 years to 64.2 years for males and from 58.2 years to 68.5 years for females.

“It’s very encouraging that adults and children in India are living longer and healthier lives,” said Dr. Jeemon Panniyammakal of the Public Health Foundation of India and a co-author of the study. “But India’s growing influence on global health means we must do more to address the diseases that kill people prematurely.”

In other parts of the world, life expectancy gains in sub-Saharan Africa were mainly driven by reductions in deaths from diarrhea, lower respiratory tract infections, and neonatal disorders. Reductions in cardiovascular disease, some cancers, transport injuries, and chronic respiratory conditions have led to the longevity gains in high-income regions.

“Almost a decade after HIV/AIDS peaked globally, this remains the leading cause of premature death in more than a dozen countries in sub-Saharan Africa,” said Dr. Andre Kengne, of the South African Medical Research Council, and a co-author of the study. “As fewer young people die from childhood diseases we must do more to ensure that HIV/AIDS does not become a threat for people of all ages.”

When looking at other causes of death, progress is seen in lower death rates despite increasing numbers of deaths. Some of the biggest increases in premature mortality since 1990 were seen for diabetes, HIV/AIDS, hypertensive heart disease, chronic kidney disease, and Alzheimer’s disease. But for many disorders, including stomach cancer, Hodgkin’s lymphoma, rheumatic heart disease, peptic ulcer disease, appendicitis, and schizophrenia, death rates have fallen by more than one-third since 1990.

Death rates for some cancers have fallen (lung by 9%, breast by 18%, and leukemia by 20%). Global age-standardized death rates also have fallen by more than one-fifth for ischemic heart disease and stroke.

Leading causes of death globally, with the number of deaths

The Institute for Health Metrics and Evaluation (IHME) is an independent global health research organization at the University of Washington that provides rigorous and comparable measurement of the world’s most important health problems and evaluates the strategies used to address them. IHME makes this information widely available so that policymakers have the evidence they need to make informed decisions about how to allocate resources to best improve population health.