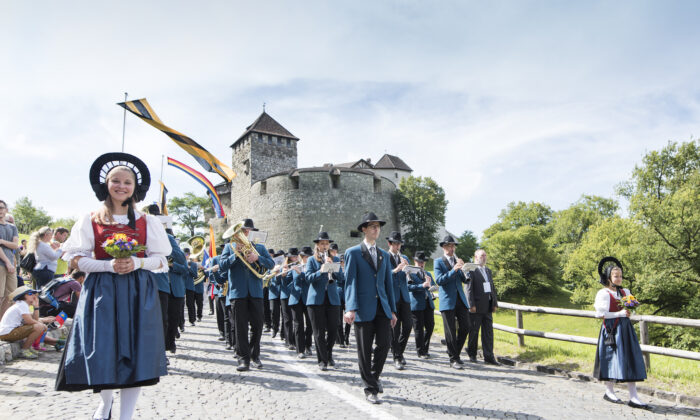 Liechtenstein: Big Adventures in 1 of the World’s Smallest Nations

It’s the first time I’ve taken a city bus to a whole other country. Winding high into the Alps, most of the journey took place on a train, crossing the breadth of Austria, then climbing into the snow-capped peaks in Switzerland. Finally I disembarked from the sleek, modern carriage in the small town of Buchs, a picture-perfect Swiss place that shines under the sun. Taking in the colorful flower boxes on balconies and a busy little shopping street, I got directions the rest of the way from a friendly, mustachioed man working at the station.

Looking a little concerned, he noted that I would need to change buses to get to my destination.

“Take the number 12, descend to the platform, wait five minutes, and then board the number 11,” he said with a German accent, his expression reflecting that he doubted I could make such a complicated travel maneuver.

“If you get confused just ask, and someone will give you directions from there.”

Despite his doubts, everything went well. A simple sign marked the border. The entire trip, including the transfer, took less than 20 minutes, right into the heart of Vaduz, the capital of Liechtenstein.

Liechtenstein is a funny place. A micro-state sandwiched between Austria and Switzerland, skirted by the mighty Rhine River, its very existence includes a couple of interesting quirks. Covering little more than 60 square miles, just 15 miles from north to south, it’s the smallest country in the world to border two different countries. And one of just two to be doubly landlocked (meaning you need to cross two different countries to reach the sea).

In some ways, this German-speaking country feels like a medieval kingdom, and perhaps that’s not surprising. Liechtenstein is still ruled by a prince, and the castle he inhabits with his family rests on the flanks of a mountain visible to many of his subjects, who inhabit the spreading valley below, and who number fewer than 40,000 altogether.

The principality takes its name from the ruling family who occupied Liechtenstein castle in Lower Austria as far back as 1140, and over the centuries collected vast lands across Europe, in Moravia (now part of the Czech Republic), Silesia (present-day Poland), and Styria (Slovenia and Austria). They acquired two neighboring lordships—Vaduz and Schellenberg—in 1699 and 1712; in 1719, Charles VI united them and declared Liechtenstein a principality in the Holy Roman Empire.

When Napoleon took control of the empire in 1805, he dissolved feudal arrangements, meaning Liechtenstein no longer owed obligations to the crown. In 1866, with the dissolution of the German Confederation, the country gained its independence. It remained neutral through the two world wars, and industrialized in the postwar period. Later, under Prince Hans Adam II, the principality joined the United Nations, the European Free Trade Association, and the World Trade Organization. Through a series of constitutional amendments, the prince sought to increase his power. These came to a referendum in 2003, and Liechtensteiners voted to affirm his ability to veto legislation, although they reserved the right to remove him by a vote of no confidence, should they deem that necessary.

Today, the 130 rooms of Vaduz Castle are the day-to-day residence of Prince Alois and Duchess Sophie, who raised four children behind its thick walls. This isn’t the kind of palace (like Versailles, or Pena) where you can take a guided tour­. An actual, functioning residence, the gates of this 900-year-old place remain closed for 364 days every year, swinging open to provide a glimpse inside only on Aug. 15, Staatsfeiertag, the principality’s version of the Fourth of July.

But that doesn’t mean the prince is aloof. As I walked down a pedestrian street in the heart of Vaduz, passing high-end boutiques, watch shops, and the Tre Cavalli, a dynamic bronze statue of three horses, I entered the national museum. Chatting with the young woman working at the front desk, she said she sees Prince Alois all the time—everybody does.

“They always bicycle right through town,” she said.

The museum is housed in a building that dates back to 1438 and was once home to a tavern, and the seat of government (but not at the same time). It’s fascinating, though some of the finer points get a little lost in translation. A series of antlered heads—made from multi-colored plaid material—line the uppermost reaches near the ceiling over the main stairwell. One room is dedicated to cat portraits. And in addition to detailing Liechtenstein’s history, and displaying historic paintings, the museum exhibits stuffed examples of the principality’s wildlife, including mountain goats, beavers, and various birds of prey.

It’s a reminder that, despite its diminutive size, there are still wild places here. Striding out, I placed my map in my back pocket, and just kept walking, not headed anywhere in particular, just content to make random turns until it seemed like I had experienced this place. Above, Vaduz Castle held its princely position. Crossing a meandering creek and passing handsome little residential homes, ahead, I found the Rhine. Broad, but shallow, the water is a little murky and blue, in the way that mountain streams often are; the wide valley here offers a 360-degree panorama of soaring, snow-capped Alpine summits. Along the banks of the river, on a footpath, and in a series of interlinked parks, people walked, jogged, and enjoyed the sunshine. One family, pants rolled up to the knees, had walked out to a rocky little island in the middle of the river.

And then, something unexpected: a long, wooden, covered bridge. Spanning the Rhine, it connects Liechtenstein to Switzerland. I would later learn that the Alte Rheinbrücke (or, Old Bridge) stretches more than 440 feet, and stands as the last wooden bridge over the Rhine. Walking across, I noticed a little sign marks the border, the flags of each nation on either side, and people waving as they walked and biked across. Having entered on a lumbering city bus, I marked another first—exiting a country on foot, by covered bridge. A one-of-a-kind experience, in a strange and wonderful little country. Stepping out the other end, I turned around and headed back—while tiny, there was still more of Liechtenstein for me to experience before sundown.