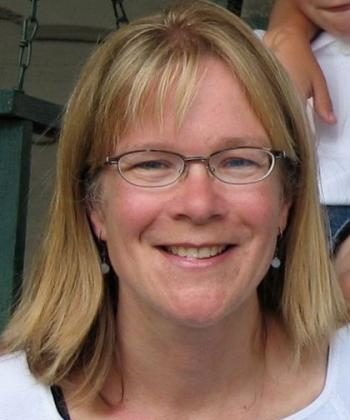 Kristen Nygren and Her Portable Profession

Kristen was born in Rochester, New York. When I asked her how many siblings she had, she said, “I have a younger brother, Ren Nygren. I also have an older ghost sibling—named Kirstin.

“Since mother lost her first child, she named me Kristen, almost the same name as that of the baby she lost. Kirstin my ghost sibling was ever a factor in my own life. Mother was afraid something might happen to me. Mother’s anxiety ruled my years at home. She was ever vigilant making sure that I was never far from her watchful care.”

“I spent many hours sitting in a maple and felt peaceful as I observed nature around me. I liked being alone on my perch.”

I asked Kristen how her mother let her go away to Harvard, away from her watch.

When Kristin went away to Harvard, it was hard on her mother, who had to console herself that her daughter was living in a dorm, and that she was only a phone call away from home.

Kristin’s father was a Presbyterian minister and her mother’s specialty as a teacher in early childhood education, (the most important part of education) provided a genteel home life. Kristin herself leaned towards Buddhism—ironically, being a Buddhist was a mild form of self-declaration.

Her parents were old fashioned in their thinking. They were most alarmed when she went in for Psychiatry at University of California, San Francisco. They probably imagined Psychotherapy as a Pandora’s box.

Nonetheless, the Kristen you meet today at EcoVillage was helped greatly by her training in psychiatry. She says, “When I did my first psychiatry rotation, it felt like I was coming home to what I most wanted to give.”

It is not possible to trace all the stages of her evolution during the 8 years when she came to psychiatry—biological anthropology, brain evolution to being biped and later working with Vietnam Vets who needed most to be heard. Kristin had become a creative listener.

These were wonderful choices for her. For one thing, her profession is portable. Kristen is married and has three young sons. The move to EcoVillage was easier for her husband, but Kristen had to let go a lot more.

She met her husband Jeff at an English folk dance where a caller calls out the steps. In my opinion, they were meant for each other: each thought the world of the other. The adjustments along the way are universal: the birth of their three sons, and leaving her life in California.

“I felt deeply absorbed by the compelling instinctive task of meeting the needs of my first son; I was overwhelmed how exhausting it was to care for him—he was not an easy child.”

“I was surprised to realize that staying home with him was as hard as being a medical intern, except with a baby you are always on call.”

But after a difficult year in EcoVillage, they were able to move from a landlocked unit to one that overlooks an Italian landscape. And best of all, she could work 18 hours a week as the director of Family and Children’s Service in Ithaca.

“I am their Medical Director and 1 of 3 clinical psychiatrists working with a great group of therapists. It is a really exceptional, non-profit outpatient mental health clinic (and more).

"Family & Children's Service of Ithaca is the oldest existing human service agency in Tompkins County, and has been serving the community since 1885.

“I work there 3 days a week—about 16-18 hours a week total—which feels just right to me—enough to really be able to be fully present there and feel that I can do a good job, but it leaves me enough time to be present at home with Jeff and the kids, with some time for myself, too. I feel really lucky to have that balance.”