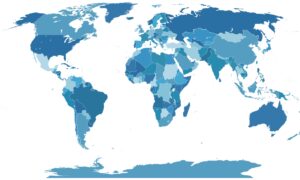 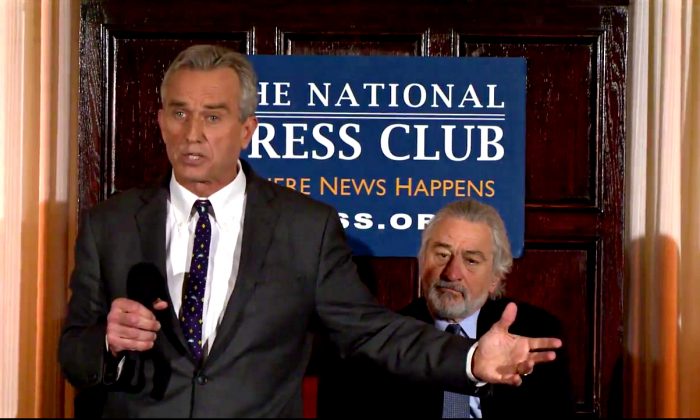 In a challenge to journalists, Robert Kennedy Jr. and Robert De Niro say they will give $100,000 to anyone who can find a study proving the mercury levels in vaccines are not toxic for infants and fetuses.

Kennedy, who is head of the World Mercury Project, a non-profit dedicated to fighting all forms of mercury pollution, and author of the book “Thimerosal: Let the Science Speak,” said he’s spent years watching the press repeat what public health officials say without critically questioning or citing primary sources and thus the press has failed as watchdog for the vaccine industry.

“We are going to offer a $100,000 reward, it’s called The 100K Challenge, to any journalist or anybody else who can point to a single existing study that says that it is safe to inject mercury into babies and pregnant women at the levels that we are currently injecting them with the flu vaccine,” Kennedy said at a press conference at the National Press Club in Washington D.C., on Feb. 15.

The Centers for Disease Control and Prevention (CDC) recommends that every person over the age of 6 months receive a flu vaccine. Currently, only multi-dose vials of flu vaccines contain thimerosal, which is used as a preservative to prevent bacterial growth. The CDC said that for the 2016-17  flu season, 157 million to 168 million doses of flu vaccine would be produced, of which around 120 million would be thimerosal-free.

Starting in 2001, the CDC began to reduce or eliminate thimerosal in vaccines given to children under six years old as a “precautionary measure.”The concern was that some children vaccinated according to government recommendations might be exposed to mercury levels that exceeded what was deemed safe.

Thimerosal has been used in vaccines since the 1930s and has been at the heart of a heated safety debate in the United States. The official position of the CDC and World Health Organization is that there is no evidence of harm from thimerosal in vaccines.

Their explanation is that the form of mercury used in vaccines, called ethyl mercury, does not accumulate in the body like the methyl mercury, which is the type found in seafood and that most of the dangers associated with mercury are linked to.

Doctors, independent researchers, and at least one current and one former CDC scientist, however, say evidence for the safety of vaccines and/or thimerosal is lacking. Or that the evidence points directly to harm.

Kennedy points to reams of evidence he says show mercury is toxic, including the form used in vaccines.

Kennedy says he has had several conversations with Donald Trump since he was elected president about forming a vaccine safety commission.

De Niro has a son with autism whom he says changed overnight after being vaccinated. The star made headlines last May after he decided to pull the film “Vaxxed” from the Tribeca film festival, a move which he later said he regretted.

“Vaxxed” is a documentary about the secretly taped confessions of senior CDC scientist William Thompson who said that he and colleagues intentionally manipulated data in a major vaccine safety study. According to Thompson, they removed a correlation found between autism and the MMR vaccine given to very young African American boys. Thompson has turned thousands of files over to Congressman Bill Posey, who in 2015 called for an investigation into the issue.  This investigation has not yet taken place.

Both Kennedy and De Niro do not believe a thimerosal safety study exists that could win the $100,000 prize.

However, Kennedy said they have lined up internationally respected scientists who will act as judges for any submissions.