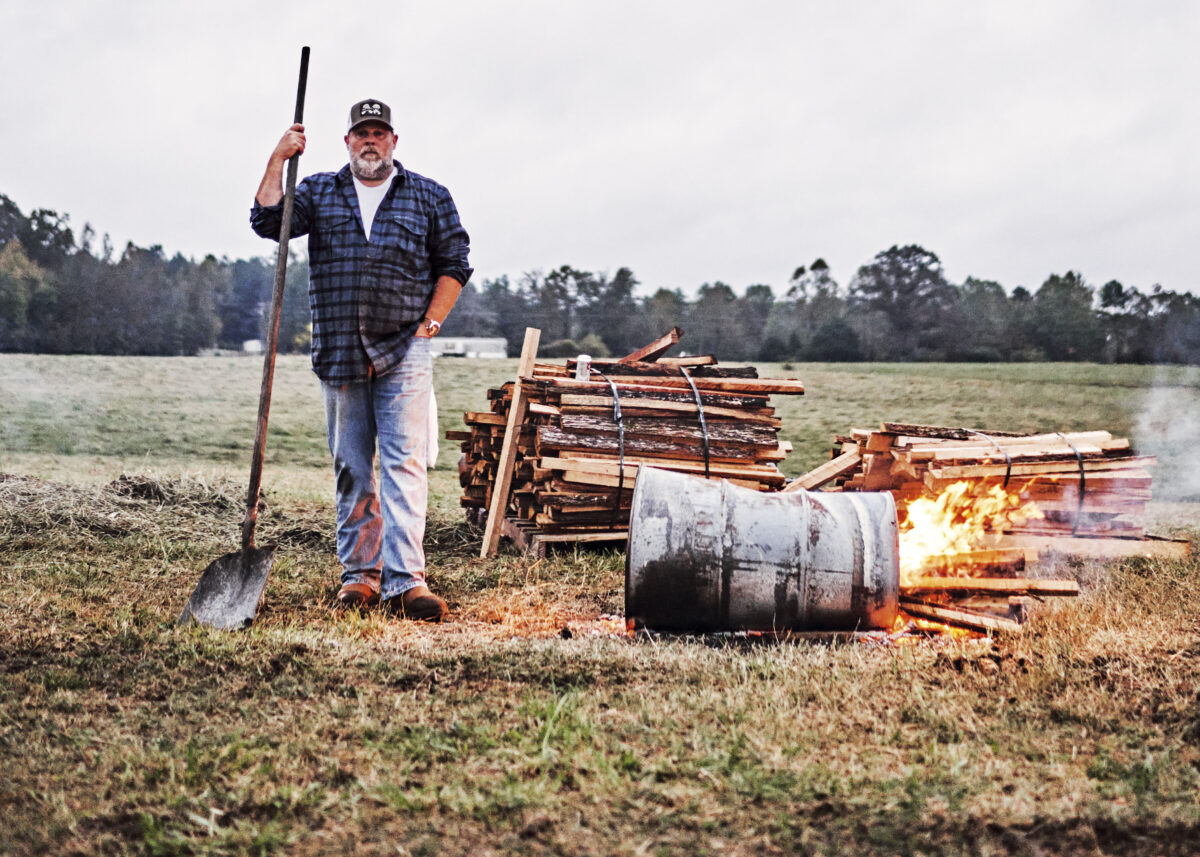 Pat Martin is the pitmaster and owner of Martin's Bar-B-Que Joint, which has locations in Tennessee, Kentucky, South Carolina, and Alabama. (Courtesy of Andrew Thomas Photography)
Food

After becoming obsessed with the West Tennessee specialty, the Nashville-based chef and restaurateur dedicated his life to perfecting—and preserving—this disappearing craft
BY Kevin Revolinski TIMEMarch 12, 2022 PRINT

Pat Martin is one of a rare breed: an open-pit barbecue master who uses whole hogs, a West Tennessee tradition that requires a 24-hour cooking time at 200 degrees Fahrenheit—as well as hours of prep.

“The French have their cheese; we as Americans have our barbecue. You drive 50 miles and it changes,” Martin said.

Born in Memphis, he first remembers a trip to Gridley’s Bar-B-Q when he was 5 years old. His father’s job took them to the East Coast for several years, but then they moved to Mississippi to be near family.

In high school, Martin bought his first cookbook, “The Thrill of the Grill.” A section about whole-hog barbecue “really filed itself away in my brain,” he said.

During his first week at college in 1990, he found Thomas & Webb Barbecue, and it was “an absolute epiphany,” he said. Owner Harold Thomas personally put together his sandwich.

“He pulled it right off the hog, and I thought ‘I have to learn how to do this,’” Martin said.

He became a regular.

On Columbus Day 1991, at a family reunion fish fry, Martin drove an hour to get a couple of hogs from Thomas, who also gave him careful instructions on how to build a brick pit for the occasion. Everyone loved it. That’s when he realized that “I want to make people happy by making something to eat.”

Still, he didn’t see it as a career.

“I was just going to go on making money and retire one day when I was 50 and open up a barbecue joint and kinda live my life out,” Martin said.

But then life happened: He graduated; found work; got married, divorced, and remarried; and went broke. As he went through the challenges of those years, he kept cooking “the other classical ways,” not only barbecue.

“I didn’t think about it as a career until it slapped me in the face in 2006,” Martin said.

That’s when it all came together. He found a 12-table space in Nolensville, Tennessee, and opened Martin’s Bar-B-Que Joint, serving whole-hog pulled pork sandwiches.

Martin had confidence in his food, but he had to learn the restaurant business as he went along. At first, he would run out each day.

“People would get angry, but always come back,” he said.

Months later, the line was out the door. Now, Martin’s has 10 regional locations.

Open-pit barbequing is best, according to Martin.

“When you use a smoker, there is an entry for oxygen and an exhaust,” he said. “With a pit, it’s like a set of gills or a salamander. The entire pit breathes and you don’t have as many hot spots.”

To preserve the tradition, he’s written the book on it: “Life of Fire: Mastering the Arts of Pit-Cooked Barbecue, the Grill, and the Smokehouse.”

Pit barbecue is all about the fire, and the procedure and the fire maintenance are the arduous parts.

“Once [you] learn that skill, [you] don’t need barbecue recipes,” he said.

Favorite Drink: A good biodynamic wine or a Coke

Guilty Pleasure: Pizza (and pineapple shouldn’t be on a pizza!)