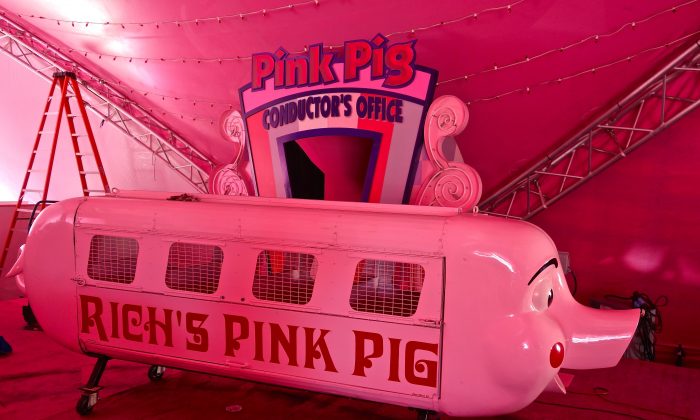 The original Rich's Pink Pig in a tent at Macy's at Lenox Square in Atlanta on Jan. 5, 2016. (Mary Silver/Epoch Times)
Arts & Culture

A volunteer gig took me to the mall this holiday season. My normal policy is to give malls a wide berth right then. Because they can be Blade Runnerish nightmares, am I right? Not that I am immune to the lures of the consumer world. No. A fragrant miracle cream, a glowing box of Godiva chocolates, a statement necklace—I’m in. My credit card is out.

But altruism girl, not material girl, was on top, so I manned my little post, and watched the people.

Santa was around the corner. LEGOLAND® was up the escalator. Priscilla the Pink Pig was next door. You don’t know her? She is quite local.

The people were like this: Some solitary shoppers looked anxious or cranky. Heads down, hands grasping bags. Prestigious bags, cause it was a fancy mall, full of spots like Tiffany’s. I decided the more bags people lugged, the grimmer they looked. Could that be so?

People bringing the younglings to see Santa or LEGOLAND® had another look.

Priscilla, since you asked, was a monorail train in the form of a pink pig. Starting in 1953, she trundled along the ceiling of Rich’s department store in downtown Atlanta. Despite moves and corporate mergers, her glorious reign continues at Macy’s. Since 2003 she and her friend Percival run in a tent on top of a parking deck. She raises money for Children’s Healthcare of Atlanta. She did this in the past, and for a time ran at Egleston Children’s Hospital.

I rode Priscilla the Pink Pig at Rich’s. My parents took me. I remember the train having metal mesh doors that clanged shut, to keep the precious juvenile cargo from falling out. It had a smiling, Disneyesque pink face on the front and a curly tail in the back, with multiple cars in between.

The train really truly clung to the high ceiling, and it slowly traversed the toy department, so you could see the marvels below. Then, thrill of thrills, it went outside, on the crystal bridge, to the roof under the sparkling Great Tree. You could see the city, and people way below.

Then it ground its way back inside and ended in a store, no parents allowed.

There you could buy little treasures for your parents—that’s why they were forbidden to enter. You entered through a child or Hobbit sized door. My friend Jenny Kimbrell said, “They called the store ‘Santa’s Secret Workshop.’ You could buy all manner of useless items for your family. Silk padded coat hangers for mom, a tie rack for dad, etc …” According to the Atlanta History Center, it was called the ‘Secret Shop.’

Useless items need not mean uncared for items. Her child brought her a turtle pin with crystals, and she treasures it to this day, she said. Her child is long grown.

Here I am, silver-haired (but full of life) remembering a marvelous train trip and a chance to do something nice for my parents. A special experience became part of that fluid thing we call a self.

May the Pink Pig stay aloft as long as our civilization endures.

I think the people who were taking the youth to see Santa and Legos looked engaged and affable because they were creating an experience. The solitary shoppers were not.

Whatever culture you live in, it has its markers and its customs. If you are a native Atlantan, Pink Pig over the holidays is one of those. If you are Southern, collards, black—eyed peas and corn bread on New Years Day are another.

These things are not trivial. They look trivial, but they are building blocks of community. I went to the store to get collards today. The store was out! There had been a run on collards.

The man stocking the produce looked at me with melancholy brown eyes. “You have got to have collards,” he said. “Maybe there are some frozen ones.”

The cashier was shocked. “You have got to have collards.” She started hers yesterday and now has everything ready but the corn bread, sensible lady.

This food represents prosperity for the New Year: collards are folding money and black-eyed peas are coins. Corn bread simply goes with the other two.

My husband, from Rochester, New York, asked, “Are we having collards and black-eyed peas?’

Of course we are. Three stores later, yes we are. And may the Pink Pig stay aloft as long as our civilization endures.