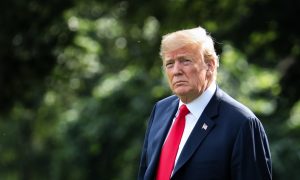 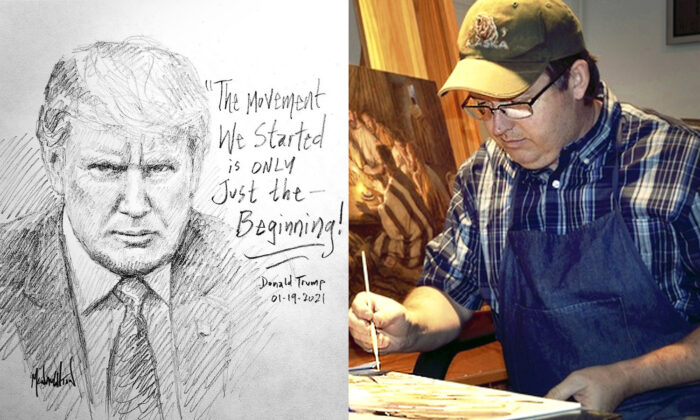 Traditional art lovers started hearing the name Jon McNaughton a lot more often in 2019, after his cheeky painting of President Trump “Crossing the Swamp” went viral on Twitter. It portrays Trump in a boat, navigating an allegorical swamp (Washington, D.C.) in a tongue-in-cheek homage to the painting of “George Washington Crossing the Delaware,” which hangs in New York’s Metropolitan Museum of Art.

“That one really hit a nerve,” McNaughton jokingly told The Epoch Times in a Zoom call, adding that those kinds of paintings get him noticed the most.

Since Trump’s inauguration in 2017, McNaughton has given voice to a pro-American movement—although he’s been painting professionally since high school, and making political art for nearly a decade.

Now, bidding farewell to a turbulent 2020, the artist is set to face 2021 with optimism, hoping his work will “shine a light” on uncertain times ahead. With Trump gone from the White House, McNaughton shares what might come next.

“Regardless of whether he’s in the White House or not, he’s going to be speaking out against the swamp,” said McNaughton, who recently completed a pencil sketch of the president with a dated quote, “The movement we started is only just the beginning!”

McNaughton said that “2020 was the year for Trump to really show how much inner strength he has.”

“I’ve just been amazed what that guy’s been through, from impeachment to coronavirus. … He’s had the whole world against him.

“And the guy just does not give up, and that’s what I appreciate about him. And I believe that a lot of Americans are the same way; we’re not giving up.”

Turning to other recent artistic endeavors, the artist has released a number of paintings in 2020, each taking from a few weeks to two months to complete. Meanwhile, some are still waiting in the wings, yet to be unveiled.

Last year, he was inspired to paint “Legacy of Hope,” portraying Trump surrounded by famous figures from history—George Washington, Harriet Tubman, Abraham Lincoln, Thomas Jefferson, John F. Kennedy, and Frederick Douglass—laying their hands on him and praying for him. Inspiration for that work came when a group of black conservatives visited the White House while riots raged throughout the country. A photo was taken while they prayed for Donald Trump around his desk.

The artist was stirred.

“President Trump did give a lot of hope to those who voted for him,” McNaughton said about “Legacy of Hope,” which he says was a very popular painting. “And I believe there’s still hope for the future.”

Another recent popular painting included “You Are Fake News,” humorously titled after Trump’s now-famous pronouncement on live television. It depicts Trump meeting with the press, portrayed as clowns, on the White House lawn with Marine One in the background.

“What I try to do with my paintings is create something that I think might become an iconic image in the future, when history looks at our time, and they ask what it was like to be conservative,” he said.

During our Zoom call, the artist was even coaxed into admitting that he has an unreleased painting still under wraps, pending copyright approval, although no sneak peek was given. “It’s one of those paintings that is going to be hidden in my vault until about 50 years from now, when it’s released, and it’s a doozy,” he said mischievously.

As for future prospects, McNaughton tries to stay fluid and open to ideas. He’s been considering the subject of the Second Amendment for a painting, a subject he touched on in prior paintings “Stand Your Ground” and “Take a Stand.” He chooses subjects that he finds important to him, such as liberty, freedom, and the Constitution.

Probably, McNaughton’s most famous work is “The Forgotten Man,” an allegory painted after the Affordable Care Act was passed in 2010. The picture was purchased by news host Sean Hannity and was even featured on his show. It portrays presidents, past and present, some venerating the Constitution and others desecrating it, while a man, representing the American people, is rendered despondent and forgotten in their midst.

The artist says that masters of art from the past who have made an impression on him include Francisco de Goya, who also painted politically. McNaughton even painted a parody of Goya’s “The Third of May.” Instead of depicting Spanish soldiers executing a mob of rebels, he portrayed Antifa threatening a group of conservatives while burning an American flag.

Looking ahead, McNaughton predicts the country is in for a “crazy whirlwind” in 2021, with the new administration in place. He hopes his art will express how people feel during this time. “[For] people who buy my paintings, … it expresses how they feel about what’s going on with the country. And so, I just focus on that, just hope for the best, and will just keep fighting the fight.”

To see more of Jon McNaughton’s work, sign up for his free e-book.