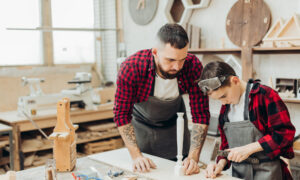 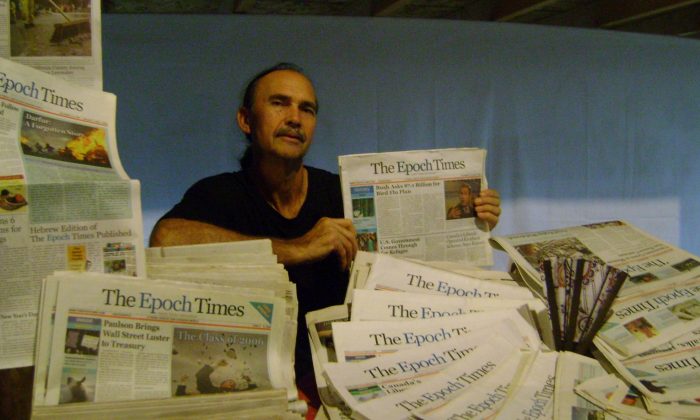 Steven Hersom shows his collection of past issues of the Epoch Times. After reading the Epoch Times, Mr. Hersom was moved to start distributing the paper on his own so that more people could read it. (Sophia Fang/Epoch Times)
Life & Tradition

Journey of Discovery Through the Epoch Times

Born to a military family, 61-year-old Steven Hersom lived in various countries, such as Japan and Turkey, during his childhood.

“I woke up to life while standing in the Japanese rice field with my two brothers,” Mr. Hersom recalls. The early childhood experience had planted the seeds for appreciating the world’s variety and unity. One day in 2005, Mr. Hersom picked up a copy of the Epoch Times outside the health food store Windmill Farms in San Diego. Little did he know, that was the start of an illuminating journey of discovery.

Discovering Oneself and Sharing With Others

A long-time San Diego resident, Mr. Hersom works in the home building business as a carpenter and plumber, but his life experience has culminated in an interest in health and nutrition.

Mr. Hersom was quite impressed by the variety of contents he found in the Epoch Times.

“The articles really struck me,” he said. “Apart from local, national, and international news, it also has sections on science, and health and nutrition, which is my overall favorite section to read.”

Mr. Hersom recalls an article that changed his life. “I became very involved in the articles, reading each word, especially the nutritional pieces. There was one simple article on deep nerve therapy foot massage by Dr. Gifford-Jones. After reading that, I felt I know how to do [deep nerve therapy foot massage]. I started practicing foot therapy on my wife, daughter, and some customers.”

The human body is an intricate machine, which modern science has yet to fully explain. One day, Mrs. Hersom noticed a lump in her breast. Mr. Hersom gave her a foot massage. “She felt a sensation travel up her legs to her upper body. Then the lump moved into her arm. After a few hours, it was gone!” he said.

After this experience, Mr. Hersom started to hold on to archived copies of the Epoch Times. “I saved all the editions for the entire year. It’s like holding on to an encyclopedia.”

One such story was of the Chinese human rights attorney Mr. Gao Zhisheng.

“Oh, Mr. Gao, what an inspiration! But he is tortured for upholding justice,” said Mr. Hersom. “We are so full of prejudice, that we don’t understand other people. I want more people to read the paper. I want them to wake up.”

With this thought in mind, Mr. Hersom started distributing the Epoch Times to his neighbors, friends, and customers.

According to Ms. Yang, who works in distribution for the Epoch Times, the English edition of the Epoch Times came to San Diego in 2003. She used to leave about 125 copies of the paper each Friday at Windmill Farms, and the next Friday, they’d be all gone.

However, at one point, she noticed there were about 40 papers leftover each week. Ms. Yang was puzzled, but soon the Epoch Times office received a phone call from Mr. Hersom.

“I wish more people could read your paper. So I took all the leftovers and distributed them to my friends and neighbors. But now I have moved. I can’t get the paper anymore,” he told the office.

The Epoch Times office helped Mr. Hersom locate a new site to pick up the papers. Reconnected with the paper, Mr. Hersom said he plans to introduce it to his Chinese friends.

Through the Epoch Times, Mr. Hersom also learned about a cultivation practice deeply rooted in Chinese traditions—Falun Dafa. He read about the persecution of Falun Dafa in China, and about the courage of the practitioners who would not give up their belief even in the face of death.

Mr. Hersom was deeply moved by this. “Those people are persecuted much like Jesus was persecuted back in the day,” he said.

2014 marks the 10th year of the publication of the Epoch Times’ special edition “Nine Commentaries on the Communist Party.” This editorial series has triggered the spiritual awakening of Chinese people, leading over 190 million people to renounce their membership in the Chinese Communist Party, to date.

Mr. Hersom learned about this movement through the Epoch Times. He sees the persecution and the movement propelled by the practitioners. “The persecution is a horrible thing. Yet these people’s personality is so strong they brought in more practitioners; and they are signing up millions of people to denounce the Communist Party. This just demonstrates how strong the belief is and how they fulfill their desires to be truthful, compassionate, and tolerant.”

Now with a pure heart and a grateful mind, Mr. Hersom is reading “Zhuan Falun,” the main book of Falun Dafa. He already sees the benefits: “Falun Dafa is healing the soul; the soul can’t be healed unless the body is pure.”

Through a 10-year-long journey from the Epoch Times to “Zhuan Falun,” Mr. Hersom has reached the following enlightenment about life: “In Christianity there lies a story of a traveler who walks into town from the east and begins to teach a kinder, gentler manner of faith in god, in self, in brother, in sister, in neighbor, and in life! Truthfulness, compassion, Forbearance: is Falun Dafa the true path? I believe it’s knocking on my door.”