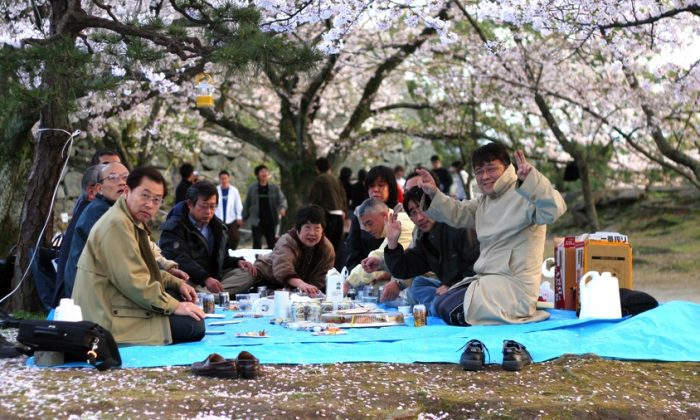 A hanami, flower-viewing party, under the cherry blossoms in Japan. (*Shutterstock)
World Culture

The first sign of spring in Japan is when the TV weather anchor pulls up the national cherry blossom forecast map. From that point on, every weather report will track the progress of cherry bloom across the country until the last petals open.

Japan sits fairly north-south, so the first of the flowers, known for their exquisite yet fleeting beauty, will appear in the south in late March, then work their way up to Hokkaido by early May (that’s ignoring tropical Okinawa where they bloom long before in January).

Japanese take the cherry blossom forecast, or “sakura zensen,” very seriously. Since full bloom may last only a matter of days to roughly a week, depending on wind and rain, it’s important to know exactly when to expect the perfect days for “hanami,” literally flower (hana) viewing (mi).

In Japan, everything stops for hanami picnics, festivals, and carefully-timed auspicious events. Entire offices will skip work to go to a park to eat and drink under trees bursting with blossoms. The one major rule is: never pick the flowers—leave the beauty for everyone to enjoy. Falling “sakura” (cherry blossom) petals are also believed to be the reincarnated souls of fallen warriors, and you wouldn’t want to interfere with that.

It’s no exaggeration to call hanami a national obsession. Everyone knows where are the best places to go for picnics, the right walks to take, and the best vantage points for photos. There are websites and books devoted to it. The number of cherry trees in the country is said to be more than a million.

Interestingly, cherry trees are almost always planted in parks rather than gardens, due to the fact that they’re not especially interesting to look at the rest of the year. To qualify to be in a Japanese garden, a plant must be endowed with four-season beauty, which the cherry tree is not.

In addition to being the symbol of spring, hanami also coincides with the informal new year in Japan. April is when the new school year starts, it’s the fiscal new year for Japanese businesses, and it’s usually when new graduates will start their first jobs.