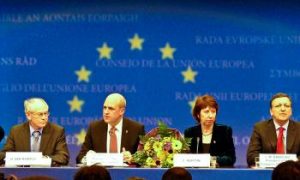 It’s difficult to appreciate the power of Scout Niblett’s music without seeing her live. Sure, the sparseness of her set-up is obvious on record – just guitar and drums, and her near-atonal vocals. But you miss the grinding punch of her effects-laden guitar, the true intensity of her quiet-loud voice, and her surprisingly self-conscious sense of humour.

On stage she wears a high-vis jacket and plays mostly alone, sometimes with a drummer. Often she sits behind the kit herself, like when she plays ‘Your Beat Kicks Back Like Death’, a live favourite. It consists solely of a drum beat and the repeated lyric “We’re all gonna die!” When she performed it in London late last year, it raised giggles when she switched into Michael Jackson’s ‘We Are The World’ half way through. Scout encouraged an incongruous sing-along, and the crowd tentatively obliged. It seemed like a joke, singing “we are the world, we are the children” in that context. But the look in Scout’s eyes said otherwise – this girl was serious.

If anything this intensity only increased with The Calcination of Scout Niblett, last year’s debut for the ever-eclectic Drag City records. The album, her fifth, invited us into her private cathartic world – her “sweatbox” as she memorably sings on the title track.

“For me the calcination thing refers to the first stage of alchemy,” she says an hour before her London gig. “It’s really about seriously looking at who you are in the world and what you think of that, and if you don’t like it, what are the things you don’t like, and how do you need to change them.”

She describes songwriting as “real intense therapy” and is fiercely adamant she’ll never be a mainstream artist. “I would hate people looking at me more than they do,” she admits, adding that “the whole commercial world frightens me and I don’t want to be a part of it.”

Born Emma Louise, Scout Niblett is originally from Staffordshire, UK, but moved to America when she was 29. “I could see very early on that I wasn’t going to survive here doing what I do,” she explains. “I didn’t want to get a normal job. I wanted to be an artist.”

Listen to our inverview with Scout Niblett:

Now 37, she makes brooding, personal music that expresses what she calls a “huge amount of emotion”. “I don’t really write songs every day, and that’s probably why they’re so emotionally charged,” she says. “Months can go by when I won’t do any music, like maybe six months, and I won’t write anything. So when I do it’s full-on, like I’m about to explode.”

Although softly spoken she’s full of quiet determination, and has an intimidating habit of scowling, eyes darting around the room. She has an unusual mid-Atlantic accent that sounds both foreign and familiar, but is par for the course given the amount of time she’s been in the US.

She clearly ploughs her own furrow in music, unswayed by the commercial concerns of both her label and herself. She is, she says, a “starving artist”. “I don’t bend on my artistic output. I’m very stubborn about it. That’s caused difficulties in the past because people didn’t necessarily nurture me in the way I wanted them to.”

She also refuses to be drawn on comparisons to other musicians. “As soon as you try and start putting yourself or other people in categories or boxes you’re basically taking away what’s unique about the artist,” she says. “Because they’re not just a cross between so-and-so and so-and-so. There’s far more going on if you really listen to music than just referencing other people.”

Her sound is quite minimal, mainly just her and an electric guitar, sometimes banging out scatty, full-on rhythms on the drums. Would she ever take on a band? “Since 1997 I’ve never had more than me and a drummer,” she says. “So I think it’s pretty fixed. But I’m always open to whatever I feel at the time when I’m writing something. If I feel like I need more instrumentation then it would make sense to honour that on a tour too. But I’m not really drawn to that. I love minimal instrumentation.”

You’d think loneliness might be an issue for such a solitary artist. But no. “I’m less lonely now than I’ve ever been in my life,” she says. “I’m happily married. I feel really at peace, kind of because of that. I feel very connected to someone, and it’s really nice. I feel almost safe for the first time, in an emotional way.”

An “obsession” with astrology has not only inspired an album title – Kidnapped By Neptune – but also guides her daily life. The next two years, she says, will be a very difficult time. “I’m trying to channel the energy that’s coming up into being productive, because if I don’t be productive, I think things could pretty much go quite badly wrong.”

“The whole purpose of looking ahead is trying to take charge of the energies that are coming up instead of being a victim of them. In a more general psychology sense, when you don’t take responsibility for your life you can end up feeling like a victim of life.”

For now though, Scout Niblett is content to return to Portland, Oregon, and relax. “I’m having a huge time off to write an album. I don’t have any plans. I love that.”