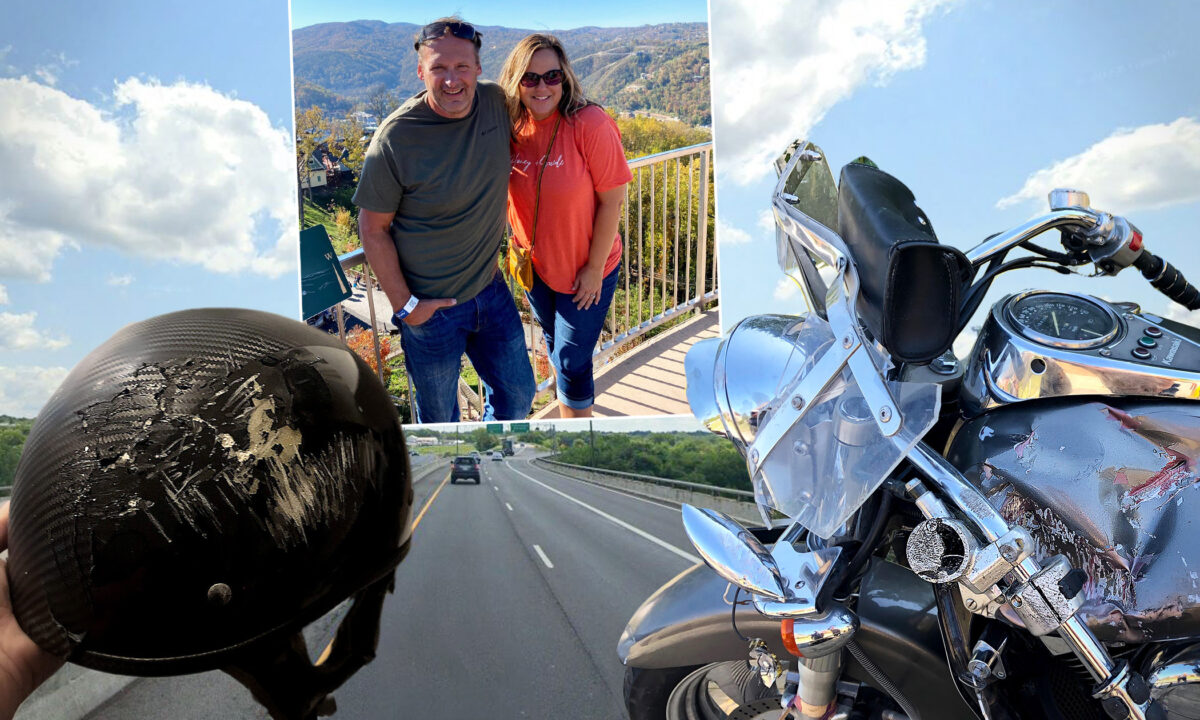 A film producer in Nashville had a devastating motorcycle accident on the freeway, but he survived and, incredibly, escaped serious injury.

As chance has it, he works at CBN, a Christian media company which regularly reports miraculous stories of survival like his.

Back in 2020, with COVID restrictions still prevalent, Rob Hull was getting together with co-workers—friends—for the first time in a while. Located in northeast Nashville, the restaurant was a 40 minute ride from Rob’s home.

It was a cool day. He mounted his Kawasaki Vulcan Classic 1500 and got on the road. Forgetting his leather jacket at home, he brushed off going back for it.

After his get-together, at around 3 p.m., he was on northbound Interstate 65, a few hundred yards from the freeway’s merger with Interstate 24, when he saw a big, blue F-150 stalled in the far left-hand lane.

Passing by, Rob took the inside lane and left the truck far behind—or so he thought.

“I remember looking back behind me to see if he was moving again. And he was, and was still trailing me quite a ways away,” Rob told The Epoch Times.

That’s the last thing he remembers before waking up on the pavement.

“I woke up on the freeway with no memory of why I was there,” he recalled. “It was the weirdest feeling to just wake up, open my eyes, look at cars that are slowly going by me as I laid on the freeway, and just wondering, ‘What am I doing here? Why am I laying here?’”

He saw the truck’s driver, who apologized profusely; not having seen Rob, he struck him from behind. Rob then flew over the handlebars, his head and shoulders smashing the pavement.

A nurse on the scene called Rob’s wife, Keri, who was shopping at the time.

“The first thing I heard was a woman on the other end saying, ‘Your husband’s okay, but he’s been in a motorcycle accident and he’s on his way to the hospital,’” Keri told CBN.

An ambulance arrived. Rob was put in a neck brace and taken to TriStar Skyline Medical Center.

Keri abandoned her groceries in the queue of the store, picked up their son and daughter, and rushed to the hospital, fearing the worst.

Rob was conscious and aware of how lucky he was when she arrived. The ever-ambitious film producer told his wife to video record his own miraculous survival.

“I knew that I was going to be okay and that I would get out of there sooner than later,” he said.

Rob’s son, Mason, and daughter, MJ, were forced to wait outside due to pandemic restrictions.

“That kind of felt like a slap in the face, to be like, we’re not going to hear anything until mom lets us know,” Mason said. “Immediately, in that moment is where I think my sister and I weren’t scared of the intimacy of really praying together.”

Keri helped Rob FaceTime them, offering comfort that everything would be okay.

Doctors, meanwhile, were shocked by the mildness of Rob’s injuries, which could have been fatal.

“They were surprised, by my recollection, that I didn’t have any cracked vertebrae, or broken bones, or brain bleed,” Rob said. “In their estimation, I was very lucky. And I just knew God was there. I felt I was blessed. I was protected.”

He added, “For not wearing a leather jacket, I was amazingly still intact.”

Rob didn’t escape all harm. His shoulder had a hole almost bone deep. His elbow, knee, and foot had road rash, but he lost surprisingly little blood.

Even stranger, he was out of the hospital that night—a miracle the Hulls attribute to the power of prayer.

“Working at CBN—it’s a Christian organization—my wife immediately called my partner at the time,” he said. “’Spread the word, Rob needs prayer. He’s been in a motorcycle accident.’

“I know that a lot of people were praying for me.”

She videoed Rob and Mason’s reunion in the hospital foyer, the father in his hospital gown, as his clothes had been cut off his body and were no longer wearable. Many I love yous were said on the drive home.

He’s recovered almost fully now. Having sustained a traumatic head injury, he’s more laid back than his boisterous old self. But that is fine, he said.

Nor is he prevented from throwing a football with Mason or answering questions about life—helping his children tell right from wrong. Rob’s still their dad on this Earth, for which he’s thankful.

“I do appreciate the people that I have in my life, appreciate my family and the time that I have with them,” he said. “My faith in God is so solid, in His goodness, that I also think that He could have taken me just as easily as letting me live. And that would have been okay, too.

“I know that sounds weird, but I trust God and His plan. I’m glad I have more time, but I know that Heaven is going to be wherever God is. And that’s going to be incredible, too.

“And I believe that’s where I’m going.”