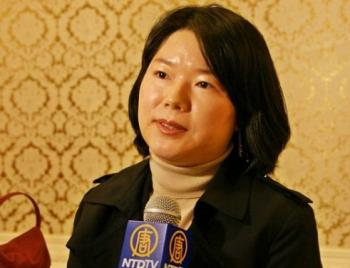 Eun-Jun Wie is a member of Lawyers For Democratic Society, a strong lawyers’ organization in South Korea. (The Epoch Times)
Arts & Culture

Ms. Wie is a member of Lawyers For Democratic Society, an influential organization of attorneys in South Korea that is known for providing assistance and legal council/support for non-native women living in Korea.

In an interview with the Epoch Times, Wie told reporters, “The content of the performance is so majestic and exciting. I will certainly come again if I get a chance and I want to invite those around me as well. I have never gotten a chance to see a show featuring Chinese traditional culture. I feel extremely glad to have had this opportunity.”

Among all the programs featuring Chinese classical dance, ethnic and folk dance, story-based dance, and soloists, Wie mentioned that the segment that stood out to her the most was The Udumbara’s Bloom.

She said, "Many of the scenes in the backdrops of the program are unforgettable.”

Wie hopes more Koreans can learn more about Chinese culture, and wishes more people will come and see this show.

The Epoch Times is a proud sponsor of the Divine Performing Arts 2009 World Tour. Please see DivinePerformingArts.org for more information.