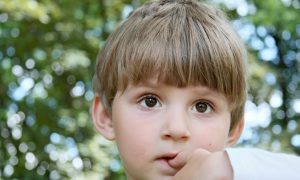 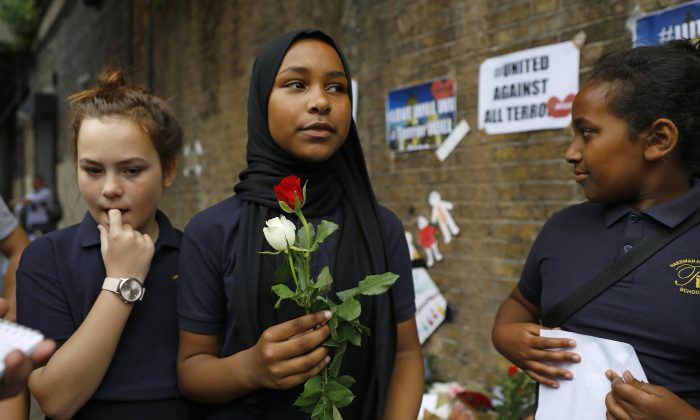 Children from Pakeman Primary School arrive to lay flowers in tribute to the victims of the 19 June van attack outside the Finsbury Mosque in north London. (TOLGA AKMEN/AFP/Getty Images)
Family & Home

How to Talk to Children About Terror Attacks

It needn't be a difficult conversation
By Jane Werrell
biggersmaller
Print

Four terror attacks this year, and a London tower block on fire. Many children will hear about such tragic events in the news or at school, and will have questions for parents – questions that might feel particularly challenging to answer.

It’s difficult to comprehend terror attacks, even for us grown-ups. Try not to add your own feelings of vulnerability into the conversation, said Dr Rachel Calam.

“The starting point is listening first to what the child’s concerns are. And really dealing with those in a practical way – rather than doing anything elaborate and complicated. It’s keeping it at a simple level, and giving older children a chance to talk and think and ask questions,” she said.

“It’s important to be led by the child, and not to impose the parent’s upset about what’s happened onto the child, but to hear what the child has to say. Because some might not have much to say about it, whereas others may be very very frightened and anxious.”

Many children might be scared about the threat of another terror attack, but Nicky Cox says it’s important to put these attacks in context. “It’s always been with us,” she said. “Guy Fawkes, back as far as 1605. Queen Victoria, seven assassination attempts on her during her 63-year reign. The Northern Ireland troubles. And – it’s not terrorism – but world wars where bombs were being dropped across the world and people were living in horrific circumstances.

“I think it’s really important to tell them [your children] that they are not living with a bigger threat than there has ever been at all. By and large the world is a safer place than probably ever before.”

Will it happen again?

That question might be at the back of the minds of many parents too. But remember that the probability of actually being in a terror attack is very rare, said Dr Calam.

“Although we’ve had three attacks in quick succession, in very highly populated areas and they’ve had enormous media attention, the fact is that these are incredibly rare events. And objectively they are extremely unlikely ever to be harmed by a terrorist attack.

“So an important message is that these things are very rare and that there are very wise and good people who are working hard to make sure that they won’t be harmed.”

Heroes in the community

“What we’ve seen in Manchester so clearly is that it’s brought out the best in everyone, a commitment to a society where we can all live together, peacefully, and people can get on well together,” said Dr Calam.

“We’ve seen these wonderful flowers and the concert that there was. They’re all demonstrations that most people are peaceful and want to get on well together. That really is the side to focus on.”

Focus on the positives, like all the heroes in the community who helped others, said Nicky Cox.

“Look at all the heroes that were helping and the community pulling together. There are a lot more good people in the world [than bad people],” said Cox. “There was one attacker setting off a bomb in Manchester, that was one person. But there were so many more good people there, everybody else was helping.”

Avoiding the news is difficult. Children in secondary school will probably consume much of their news through social media.

“Unfortunately, there is a lot of misinformation and fake news on the Internet. So I think it’s really important to say to your older children, don’t believe everything you read on the Internet, use your critical thinking. Think about where you’ve read something, about whether it’s a reliable source, go somewhere where it is reliable,” said Nicky Cox.

“Tell the truth, don’t try and hide what’s happened. But also, clearly don’t go into graphic details about what’s happened, but just tell them the facts.”

“You know your own child, what age they are and what they can deal with, and I think it’s just a case of not going into so much detail the younger they are,” she said.

“Do not have the conversation before bedtime, if you’re talking about younger kids,” said Cox.

“You don’t want it to be the last thing on their mind before going to bed, however positive you are being. Talk about it during the day then do something nice afterwards, so it’s not their lingering memory before they go to sleep.”

Dr Rachel Calam said: “Just be there to listen, to hear their fears, and to provide every reassurance that you can.”