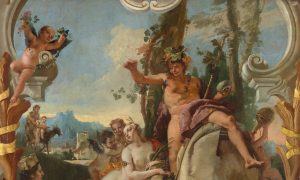 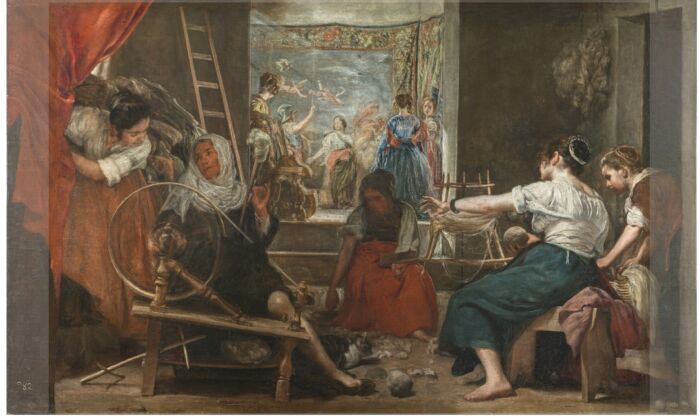 In this image of "The Spinners," 1655–1660, by Velázquez, the shaded areas highlight the three edges of the original composition that were expanded in the 18th century. (Prado Museum)
Fine Arts & Craftsmanship

It may be hard to imagine, but many well-known masterpieces are not how the artists originally painted them. In the past, paintings were often altered to fit into an interior design where it would be viewed. For instance, parts of both Johannes Vermeer’s “Girl Reading a Letter at an Open Window” and Giovanni Battista Tiepolo’s “Bacchus and Ariadne” were overpainted, changing the compositions; Diego Velázquez’s “The Spinners” was enlarged when it was hung in the new royal palace in Madrid; and Rembrandt’s “The Night Watch” was trimmed to fit into a smaller space in Amsterdam City Hall (which is now the royal palace).

With the exception of “The Night Watch,” each of the above artworks has been permanently restored, by human hands, to try to replicate how the artist originally intended it to appear. Experts at the Rijksmuseum in Amsterdam have recently used artificial intelligence to simulate the missing parts of “The Night Watch,” to hint at Rembrandt’s overall composition.

“The Spinners” or “The Fable of Arachne” by Velázquez is the most recent of those listed paintings to be restored to its original composition.

For the past few years, visitors to Madrid’s National Museum of the Prado could see Velázquez’s original 17th-century composition, but the frame that hid the 18th-century additions was not a permanent solution to preserve the work. On July 12, the museum unveiled a new custom-made frame allowing visitors to see the work that Velázquez originally created. And what a difference it has made.

Compare Velázquez’s original composition to that of the enlarged painting (with the 18th-century additions), and we can see why some viewers of the later version mistook it to be a simple genre scene of women weaving.

“During that century, it had grown 50 centimeters [19 3/4 inches] at the top edge and slightly less than 20 centimeters [7 7/8 inches] on each side,” the Prado’s senior curator of Spanish painting, Javier Portús, said in a video. The 18th-century painters had extended the building in the painting to such an extent that rather than gently framing the scene, it dominated the composition. This caused the background scene to recede further, and in turn focused viewers even more on the foreground, where the women are weaving.

Not until the 1930s and 1940s did scholars realize that “The Spinners” contained mythological content. The figures in the background weren’t, as many viewers believed, simply showing the tapestry woven by the women in the foreground. In the background, Velázquez depicted part of the Greek myth of Arachne, which is the central story of his painting and why its alternative title is “The Fable of Arachne.”

In “The Metamorphoses,” Ovid described how Arachne, a girl of humble birth and parentage,  wove cloth so exquisitely—from the spinning of the yarn through to the finished decoration—that “often the nymphs of Mount Tmolus deserted their vine-covered slopes, and the nymphs of the River Pactolus deserted their waves, to examine her wonderful workmanship.” But Arachne always denied that her talent was bestowed by the goddess of handicrafts, Pallas. Full of bravado, Arachne challenged Pallas to a weaving competition to prove her point, vowing that if the goddess won then she would concede that her artistic gifts were divinely bestowed.

Pallas then disguised herself as an old woman, symbolic of wisdom, and told Arachne that “Not everything old age has is to be shunned: Knowledge comes with advancing years. Do not reject my advice: Seek great fame among mortals for your skill in weaving, but give way to the goddess, and ask her forgiveness, rash girl, with a humble voice: She will forgive if you will ask.”

The defiant, young Arachne retorted that she too felt unheeded, and she asked why Pallas was not present for the contest. Pallas then dropped her disguise, and the contest began.

In Velázquez’s painting, Pallas can be seen as the old woman at her spinning wheel. And on the right side of the painting, Arachne has her back turned to us as she ignores the old woman’s plea. Consumed with competitiveness, she unravels her skein of wool.

Pallas wove a moral lesson into the four corners of her tapestry. Each story was another compassionate warning to Arachne of the consequences that come to mortals who compete with or defy the divine. Pallas hoped Arachne would take heed.

Arachne, in her tapestry, wove instances of times when the gods acted improperly in the mortal world, such as when Zeus abducted Europa by disguising himself as a beautiful white bull.

Velázquez chose to re-create Titian’s painting “The Rape of Europa” as the tapestry hanging in the background of his painting. Zeus, who abducted Europa, was Pallas’s father. (Velázquez, as a painter of the Spanish royal court, would have probably seen Titian’s painting in the royal palace.)

In front of the tapestry, we see Pallas as the goddess of war, with her helmet and shield, responding to Arachne’s perfectly woven cloth. She is livid; Arachne dared to outshine a goddess.

Velázquez didn’t depict what happened next in Ovid’s myth: Pallas strikes Arachne with her shuttle. In unbearable pain, Arachne puts a noose around her own neck. At that moment, Pallas turns Arachne into a spider so that she must constantly weave and hang for eternity.

Besides the confusion caused by the 18th-century additions to “The Spinners,” Velázquez created the painting in the last decades of his life, when he was known to have painted complex and ambiguous compositions.

On the Prado Museum website, the artwork is considered an ode to the nobility of painting, because Velázquez expertly used his brush and paints to depict the passage of time from when the material is spun, woven, and made into the tapestry. Velázquez not only told Arachne’s story through the medium of painting, but he also used a famous painting to depict her accomplishments.

The website also notes that Velázquez was aware of mythologist Juan Pérez de Moya’s view that the myth of Arachne demonstrated the constant advancement of art. In “The Spinners,” Velázquez built a narrative about artistic progress and competitiveness by depicting the tapestry in the background and by reproducing an original painting by Titian which was, and continues to be, copied by many artists aspiring to mastery.

The American Friends of the Prado Museum and the American Express Foundation funded the new frame as part of the “Reframing the Prado” initiative, to ensure that the Prado collection is shown at its best. To find out more about “The Spinners” by Velázquez at the National Museum of the Prado, visit MuseodelPrado.es