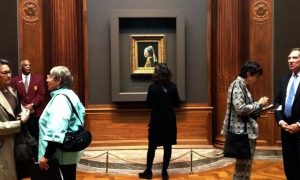 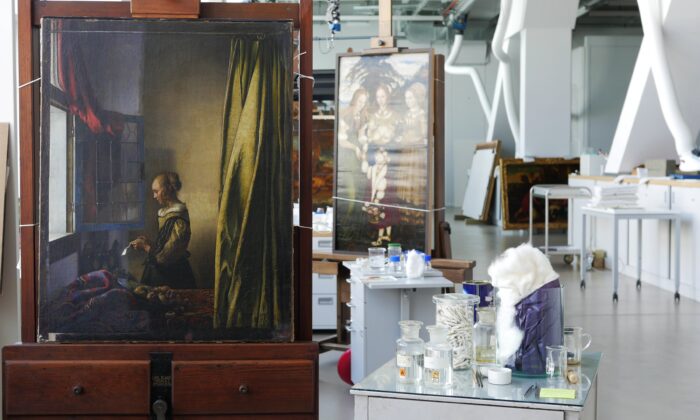 Johannes Vermeer's "Girl Reading a Letter at an Open Window," circa 1659, at the start of its restoration in the workshop of the Old Masters Picture Gallery, in Dresden, Germany. (Jürgen Lange/SKD)
Fine Arts & Craftsmanship

Restoring the ‘Girl Reading a Letter at an Open Window,’ by Johannes Vermeer
By Lorraine Ferrier
biggersmaller
Print

Standing by an open window, a young lady is engrossed in reading a letter. On a table in the foreground, a bowl of fruit seems to have been toppled, spilling some of its contents onto a colorful and richly woven “rug.” Perhaps, the lady toppled the bowl in her haste to read the letter she grips so tightly.

Or, as likely, Dutch painter Johannes Vermeer, who created the picture “Girl Reading a Letter at an Open Window,” painted the rug and fruit bowl to draw us into the painting. He also guides us into the painting with the green velvet curtain to the right of the picture frame. The green, in turn, complements the lady’s green dress.

Besides the pops of red and green, the overall painting is muted. The vast background gives us an overall sense of the lady’s solitude, and further emphasizes her paying close attention to the letter’s contents.

For over 350 years, the multitude of visitors who have seen the painting at the Old Masters Picture Gallery in Dresden, Germany, may have drawn similar conclusions when they viewed it. But the scene is not the same as when the painting first left Vermeer’s studio around 1659. Indeed, knowledge of the painting’s artist and content eluded experts for many years.

The painting has been part of the Old Masters Picture Gallery since 1742. In that year, the elector of Saxony and king of Poland, Augustus III, bought 30 paintings from Prince Carignan in Paris, and the painting “Girl Reading a Letter at an Open Window“ was added as a complimentary gift to the king.

At the time, Vermeer was little known outside of Holland, and the painting was attributed to Rembrandt. Since then, the painting has been attributed to the Rembrandt School, then to one of Rembrandt’s pupils, and even to Pieter de Hooch, who worked in Delft as Vermeer did. Even though, over the years, art scholars believed the painting to be by Vermeer, that attribution wasn’t well received, and so it wasn’t officially declared a Vermeer until the 1860s.

In 1979, an X-ray of the painting revealed that Vermeer had originally rendered a framed picture of Cupid in the right corner of the composition. Cupid holds a bow in his right hand and raises his left. This cupid motif can be seen in three of Vermeer’s other interior paintings, one example of which is “A Young Woman Standing at a Virginal,” at The National Gallery in London. According to the National Gallery website, Cupid is in the style of a 1608 book illustration representing faithful love.

For many years, it was believed that Vermeer himself painted over Cupid in “Girl Reading a Letter at an Open Window,” so no attempt was made to remove the overpaint to reveal it.

But in 2017, when the painting was sent for its current restoration, an analysis of the paint layers revealed that the paint used for Cupid and the paint that covered it were applied decades apart. Therefore, Vermeer couldn’t have painted over Cupid. That’s when the restorers realized that they could remove the overpaint and restore Vermeer’s original composition. It’s now thought that Cupid was later hidden due to changing tastes and fashions.

The Old Masters Picture Gallery released a photograph showing the restoration progress, taken on Jan. 16, 2020. In the painting, a confident Cupid can be seen looking directly at the viewer, as proud as Punch, perhaps because after at least 270 years, he’s finally going to be seen again. And not only that: When the painting is finally restored, viewers will see the young lady reading her letter not only in the light of the open window, but also in the light of love.