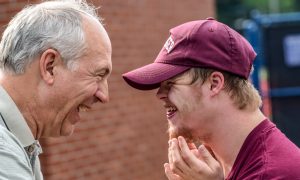 Seniors Who Feel Their Life Has Purpose May Live Longer
0 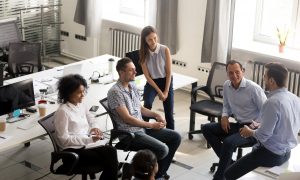 Being Surrounded on Purpose
0 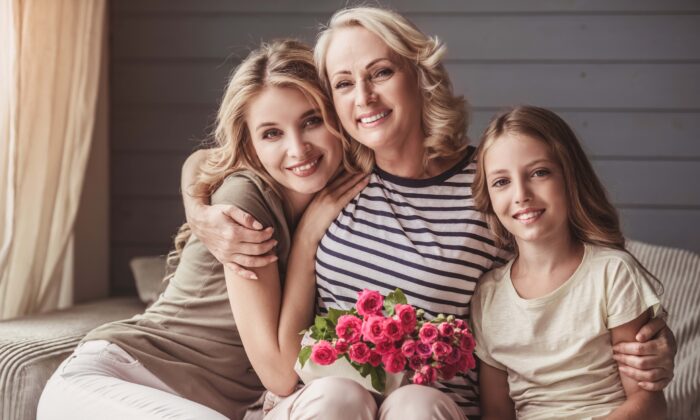 Our sense of purpose evolves as we age and our circumstances change. (George Rudy/Shutterstock)
Mind & Body

How Purpose Changes Across Your Lifetime

Purpose isn't a destination but a journey and a practice, research suggests
By Kira M. Newman
Print

Purpose is the stuff of inspirational posters and motivational speeches. When we find our purpose, they say, we’ll know what we are meant to do in life. The path will be laid out before us, and our job will be to keep following that vision with unwavering commitment.

Alongside the self-help hype is a body of research on purpose across the lifespan, reaching back more than 30 years. Following people as they grapple with their identity as teens, settle into the responsibilities of adulthood, and make the shift to retirement, this research paints a more complicated picture of purpose—but a hopeful one, too.

Here’s the upshot: We don’t have to worry about finding our one true purpose; we can find purpose in different areas of life.

In fact, purpose isn’t something we find at all. It’s something we can cultivate through deliberate action and reflection, and it will naturally wax and wane throughout our lives.

Like happiness, purpose isn’t a destination, but a journey and a practice. That means it’s accessible at any age, if we’re willing to explore what matters to us and what kind of person we want to be—and act to become that person.

This “is a project that endures across the lifespan,” as purpose expert Kendall Bronk and her colleagues wrote in a 2009 paper. This research suggests that if we’re able to revisit and renew our sense of purpose as we navigate milestones and transitions, we can look forward to more satisfying, meaningful lives.

A purpose in life isn’t just any big goal that we pursue. According to researchers, purpose is a long-term aim that is meaningful to the self—but goes beyond the self, aiming to make a difference to the broader world. We might find purpose in fighting poverty, creating art, or making people’s lives better through technology.

That process begins when we’re teens, as we explore who we are, what we value, and what we want out of life, says Bronk, an associate professor at Claremont Graduate University. As they try different interests and activities, such as music or volunteering, some teens start to discover paths they want to pursue. Other teens have challenging life experiences, such as a parent being diagnosed with cancer or a shooting in their hometown, that spur them to work on particular causes. Others are inspired by role models who are leading purposeful lives, from parents to coaches.

Knowing your skills and your interests—and in a larger sense, your identity—seems to be key to pursuing purpose. In a 2011 study, high school and college students answered surveys about their sense of purpose, as well as their sense of identity—how clear they were on the kinds of jobs, values, friendships, politics, religion, and sex roles they would have in life. Researchers found that the more solid their sense of identity, the more purposeful they were. In turn, they were also happier and more hopeful for the future.

A 2012 study by the same researchers had a similar finding, but in the opposite direction—with young people who felt purposeful building a more solid sense of identity over time. “Identity and purpose development are intertwined processes,” wrote Patrick Hill of the University of Illinois at Urbana-Champaign and Anthony Burrow of Cornell University.

At this age, though, only about 20 percent of teens have a strong sense of purpose in life, according to the work of William Damon, author of “The Path to Purpose” and a professor at Stanford. Damon has spent nearly 20 years studying how people develop purpose in work, family, and civic life.

Other teens have pie-in-the-sky dreams, or fun hobbies, or they’re just trying to get through high school. More often, childhood and adolescence seem to be the time when the building blocks of purpose are established, but we’re still exploring what we want out of life.

According to Damon, most people who find purpose do so in their 20s and 30s. That’s when we tend to start building a career and a family—both of which are major sources of purpose during adulthood, along with religion and volunteering.

In the family realm, we may find a deep sense of purpose from raising children, as well as taking care of aging parents. At work, we might feel fulfilled in supporting our coworkers, making a difference in the organization, or contributing to society, Damon writes.

When education professional Paul LeBuffe found out that he was raising a special-needs child, it was a turning point for his family and his career—and his sense of purpose. Since then, he has been working to promote resilience in children and adults, and within his own family. Working in that field means he’s always learning things he can apply to his own life, which helps give him a sense of balance.

While finding purpose can feel like an exciting adventure for young people, who might take gap years or try interesting electives in college, purpose becomes more urgent for adults.

In a 2009 study, Bronk and her colleagues surveyed people of different age groups, including nearly 400 young people (in their teens and early 20s) and more than 400 adults (around age 35). When they were searching for purpose, young people were more satisfied with life—but this wasn’t true of adults. In fact, the more they were still actively seeking purpose, the less satisfied they were. The researchers surmise that this comes down to cultural norms and the expectations adults have for themselves.

“In our culture we expect young people to explore what matters most to them, but by midlife, we expect them to have sorted this out,” Bronk and her colleagues write.

At some age, lacking in purpose becomes unpleasant—but Bronk points out that having purpose isn’t always a picnic, either. Going after a big, long-term goal can be stressful and discouraging; as anyone who has raised a child knows, things that bring us meaning don’t always bring us day-to-day fun and good cheer.

While there may be struggles, though, people who have that sense of direction and purpose do ultimately tend to have more satisfying, healthier, and even longer lives.

While purpose tends to be highest in adulthood, old age can come with a diminishing sense of purpose and direction. In one survey of people ages 50–92, only 30 percent reported feeling purposeful.

The causes aren’t too surprising. Two of the biggest sources of purpose for adults, work and family, take a major hit when we retire and when kids leave home. Suddenly, we wake up to days that aren’t structured by meetings and deadlines, by soccer games and homework help. It can feel like the things that defined us—our very identity—are slipping away. On top of all that, niggling health problems can make it physically harder to stay involved with activities and people that might keep us feeling engaged.

Gerontologist and AgeWave founder Ken Dychtwald sees a pattern in which society doesn’t recognize the value and wisdom of older people, writing them off as feeble or irrelevant, and elders don’t always put in the work to learn new technology and connect with younger people. While society might be telling them to relax and enjoy their golden years, he says, many older adults just feel adrift.

Not everyone has this experience, of course. People who have strong relationships and a positive attitude toward aging tend to fare better. In one study, researchers interviewed people ages 61 to 70 and identified those who were able to maintain or increase their sense of purpose over the decade. These individuals often turned their efforts inward to become better human beings, learn new skills, or tackle long-held emotional struggles. As Damon explains, the pause of retirement and an empty nest can be an invitation to introspection, in ways that weren’t possible in our chaotic midlives, and a reconnection with the things that truly matter.

John Leland, a New York Times reporter, had the opportunity to follow six New Yorkers over 85 for a year and get an intimate glimpse into their lives. They became his friends, he says, and their stories were featured in his book about happiness. He observes that the older adults who held on to a sense of purpose thrived because of their flexibility. They rolled with the punches as their lives changed and evolved, and they remained open to new experiences.

“Those who are able to understand their roles as constantly changing, constantly evolving—it’s a story that they’re still writing—are able to deal with the ups and downs that we all confront better than people who see themselves as fixed in one point,” he said.

In many ways, the pursuit of purpose as an older adult looks a lot like it does for teens. Marc Freedman, the founder of the generation-connecting organization Encore.org, sees this parallel, too: Instead of internships, Encore.org offers fellowships in which older people spend up to a year working in nonprofits, foundations, and other social-sector organizations. The experience is designed to help them find an “encore career,” a purposeful activity that serves the greater good and contributes to the world they’ll leave behind.

Gary Maxworthy, who won Encore.org’s Purpose Prize in 2007, was 56 when his wife died from cancer. After more than three decades in food distribution, he wanted to give back. He started volunteering at a food bank, where he quickly noticed a big problem and a big opportunity: Growers were having to send lots of “imperfect” produce to landfills, because they couldn’t sell it, and accepting fresh produce was too difficult for food banks. He created Farm to Family to solve that problem and ensure that fresh fruit and vegetables make it to families in need.

In Freedman’s experience, very few of us will wake up one day with a totally new purpose in life. Instead, he observes people draw on the skills, knowledge, and values they’ve cultivated over a lifetime to start a new chapter.

That’s good news, because it means the building blocks of purpose are already within us when we reach maturity.

The Practice of Purpose

Years ago, Bronk interviewed young people about their sense of purpose, hoping to gain some insight into how it developed. Afterward, she was surprised to hear how much the participants enjoyed the conversation. In fact, she and her team discovered that talking with young people about the things that mattered to them actually increased their sense of purpose in life—an outcome the researchers hadn’t even been looking for.

That’s partly why Bronk believes, deep down, that everyone has a purpose, even if they don’t realize it or know what it is yet.

“We all have things that we care about, we all have special talents that we can apply to make a meaningful difference in the world around us,” she said. Other researchers agree that you can have a sense of purpose even if you can’t write it down in a simple sentence: “My purpose is …”

As we’ve seen, we can have multiple purposes that rise and fall in importance over our lifetime, as schedules are juggled and priorities shift. When we face transitions, whether it’s changing careers, going through divorce or illness, or hitting a milestone birthday, we may be prompted to slow down, reflect, and reprioritize.

In other words, purpose is a constant practice—which is something Leland took away from his time with New York’s “oldest old.”

This article is part of a GGSC initiative on “Finding Purpose Across the Lifespan,” supported by the John Templeton Foundation. In a series of articles, podcast episodes, and other resources, we’ll be exploring why and how to deepen your sense of purpose at different stages of life.