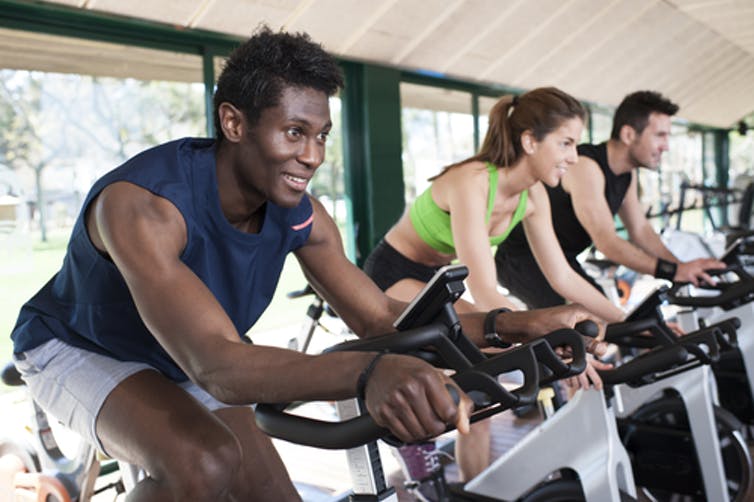 Increasing the amount of exercise is one way to use the energy stored in fat cells, or to ‘burn’ fat. (HoonQ/Shutterstock)
Weight Loss

How Does Your Body ‘Burn’ Fat?

Many of us may be considering “burning some fat” so we feel better in our bathing suits out on the beach or at the pool. What does that actually mean, though?

The normal fat cell exists primarily to store energy. The body will expand the number of fat cells and the size of fat cells to accommodate excess energy from high-calorie foods. It will even go so far as to start depositing fat cells on our muscles, liver and other organs to create space to store all this extra energy from calorie-rich diets—especially when combined with a low activity lifestyle.

Historically, fat storage worked well for humans. The energy was stored as small packages of molecules called fatty acids, which are released into the bloodstream for use as fuel by muscles and other organs when there was no food available, or when a predator was chasing us. Fat storage actually conferred a survival advantage in these situations. Those with a tendency to store fat were able to survive long periods without food and had extra energy for hostile environments.

But when was the last time you ran from a predator? In modern times, with an overabundance of food and safe living conditions, many people have accumulated an excess storage of fat. In fact, more than one-third of the adult population in the United States is obese.

The major problem with this excess fat is that the fat cells, called adipocytes, do not function normally. They store energy at an abnormally high rate and release energy at an abnormally slow rate. What’s more, these extra and enlarged fat cells produce abnormal amounts of different hormones. These hormones increase inflammation, slow down metabolism, and contribute to disease. This complicated pathological process of excess fat and dysfunction is called adiposopathy, and it makes the treatment of obesity very difficult.

When a person begins and maintains a new exercise regimen and limits calories, the body does two things to “burn fat.” First, it uses the energy stored in the fat cells to fuel new activity. Second, it stops putting away so much for storage.

The brain signals fat cells to release the energy packages or fatty acid molecules, to the bloodstream. The muscles, lungs, and heart pick up these fatty acids, break them apart, and use the energy stored in the bonds to execute their activities. The scraps that remain are discarded as part of respiration, in the outgoing carbon dioxide, or in urine. This leaves the fat cell empty and renders it useless. The cells actually have a short lifespan so when they die the body absorbs the empty cast and doesn’t replace them. Over time, the body directly extracts the energy (i.e., calories) from food to the organs that need them instead of storing it first.

As a result, the body readjusts by decreasing the number and size of fat cells, which subsequently improves baseline metabolism, decreases inflammation, treats disease, and prolongs life. If we maintain this situation over time, the body reabsorbs the extra empty fat cells and discards them as waste, leaving us leaner and healthier on multiple levels.

David Prologo is an associate professor in the department of radiology and imaging sciences at Emory University. This article was originally published on The Conversation.