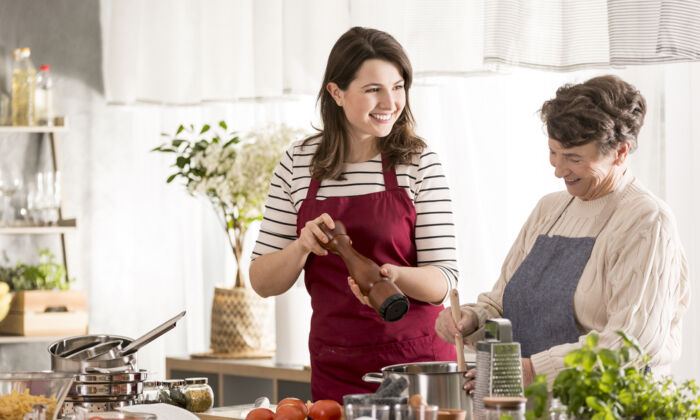 Time in the kitchen with a person from a different generation than your own, in a different stage of life, is rich and full of surprises. (Shutterstock)
Food & Dining

How Cooking Together Can Bridge Generations

In the kitchen, bonds are built, stories are shared, and memories are made to be passed down for years to come
By Rachael Dymski
Share
FacebookFlipboardTweetRedditEmail
MOREPRINTFONT BFONT S

I met my future mother-in-law, Lisa, when I was just 18. At the time, she ran a bake shop on weekends, and her kitchen always had a cake stand on the center island, filled with cookies, cupcakes, or my favorite: pie.

I have appreciated my mother-in-law’s apple pie from the first time I met her. The crust is always perfectly flaky, both light and indulgent, and filled with a variety of apples and spices. Served warm, with ice cream, I would argue that it’s a dessert that could be served any time of year.

I knew I loved her apple pie. But it wasn’t until I began baking with my mother-in-law that I really started to know her.

My mother-in-law and I come from different backgrounds. She lives only a few miles down the road from where she grew up, where her parents and grandparents and great-grandparents grew up. Central Pennsylvania has always been home for her. I grew up in America with English parents, traveled extensively, and wasn’t sure that anywhere would ever feel like home for me.

When my then-boyfriend took me to his house on a college break, Lisa asked if I wanted to help her bake for Thanksgiving: pies, cookies, and other treats. Initially, I wondered what on earth the two of us could have to talk about in the kitchen for all that time.

But then she pulled two well-worn index cards out of her cupboard. On them, in perfect cursive, was a recipe for pie crust.

We began mixing and rolling, and Lisa told me about holidays at her grandmother’s. She talked about how grand dinners felt at the Victorian-style house, with the beautifully set table and the overly-full apple pie they would have after the meal.

As we talked, her stories gave the food we were making meaning, and they gave me a way in to a relationship with her.

Cooking together across generations, as Lisa and I did the kitchen that day, is an experience that has been shared by many. I didn’t know it at the time, but this activity, formally called intergenerational cooking, has also been studied and promoted for its wellness benefits.

Time in the kitchen with a person from a different generation than your own, in a different stage of life, is rich and full of surprises. I know that for me, this time has always been beneficial.

I have always loved finding myself in the kitchen of an older woman. I love the color palette, the durable feel of the dishes, details like cherry wallpaper and the wooden tables that seem to invite anyone to take a seat. I love the stacks and stacks of recipe cards: years of history tucked away in the cupboard.

When Andrew and I were first married, we moved to Charlottesville, Virginia, for his job. I knew absolutely no one when we arrived, and quickly befriended an elderly lady who lived nearby.

Thelma was 92 at the time I met her, and at the point in her life in which she wanted to undertake the daunting task of organizing her family recipes for her daughter. Thelma and I spent hours at her wooden kitchen table going through recipes and talking about the stories behind them.

She reminisced about the way she adjusted her meatloaf to compensate for rations during World War II, the baked apple pudding she made for her husband shortly after their wedding, the pickled beets her daughter loved to eat after school.

It was a gift both ways, those afternoons in the kitchen with Thelma. I made a friend and added some recipes to my extremely limited repertoire; Thelma had help organizing and filing away a lifetime of feeding other people.

When we finished our work, Thelma looked at the stacks of paper divided into piles for desserts, appetizers, main dishes, and side dishes, and said, “Well, I guess I had a pretty busy life, didn’t I?”

The benefit of intergenerational cooking is that it’s a history lesson—about both the person and the world they lived in. You learn about what was important to them, what memories they carry closest, what life around them was like, all from the underlines and markings on the recipe cards they chose to keep.

When my younger daughter was born last November, my mother came and stayed for two weeks. Every night, around the time my baby became fussy and I was entirely occupied by her needs, my mom opened her own well-worn cookbook, turned on the oven, and cooked up something delicious: white bean chili, roasted asparagus, pork fajitas.

As soon as she opened up her cookbook, my two-year-old would put all her weight behind one of our dining room chairs to push it up to the island in the kitchen, and say, “Oh, Granny! I can help you!”

June was quickly put on measuring-cup duty. She even began carrying around our metal measuring tools so that she would be ready anytime Granny decided to start cooking. My mom and June were both given a gift that visit: time in the kitchen to enjoy and learn from each other.

I think about this on my normal days, when 4 o’clock rolls around and I need to get something on the table for dinner. Both my girls are tired and want to be right next to me at the kitchen counter.

Too often, my first reaction is to think of how inconvenient it is to cook and bake with small children. But when I can slow down and tell them the stories behind the cooking—making pies in the kitchen when I first met their Mimi, sorting through recipes with Thelma—it is then that I remember that what we do in the kitchen every day is more than feeding hungry bellies.

I am giving my children stories and passing on memories. I am giving the food on their plates shape and memory, names and meaning.

Cooking with my children is a way of letting them in, of showing them the way that I have been let in as well.

Mix flour, salt, and sugar in bowl. Add the butter and lard and mix until mixture resembles small crumbs. Slowly add water and vinegar until dough holds its shape. Refrigerate for at least a half hour, and until ready to use.