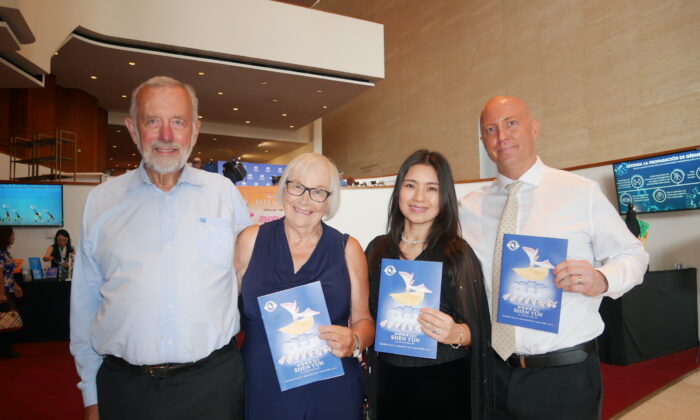 Ben Lucas (R) with wife, father (L) and his father’s girlfriend at the Jones Hall for the Performing Arts, in Houston, on June 4, 2022. (Sherry Dong/The Epoch Times)

HOUSTON, Texas—Ben Lucas, an accounts manager, said “I definitely feel hopeful” after attending his first Shen Yun Performing Arts concert with his wife, father, and friend at the Jones Hall for the Performing Arts in Houston on June 4.

“I am hopeful with my marriage and hopeful with my life and my children, and the future together. I think what this show does is it reinforces the hope that I already have within,” he added.

Shen Yun is the world’s premier classical Chinese dance company. Based in New York, Shen Yun’s mission is to revive the 5,000 years of traditional Chinese culture that has been on the brink of extinction since the Chinese communist regime seized power in 1949. Shen Yun says its performance this year demonstrates “China before communism.”

“I loved the music … I love the combination of more traditional instruments and Chinese instruments together. It created a new sound that I wasn’t familiar with together, and I really enjoyed that,” he said.

“All together, it had an inspiring message—the message of interconnectedness and that we have a purpose in life that is not just momentary but an eternal purpose: to return to our Creator … to God,” he added.

China was once known as “The Land of the Divine” and Shen Yun presents this culture by drawing upon ancient Buddhist and Daoist philosophies. Hence, the performances often include spiritually uplifting messages.

In the past, artists looked to the divine for inspiration and cultivated virtue in order to create uplifting art. Today, Shen Yun’s artists follow in this noble tradition, which is why audiences feel there is something different about Shen Yun, says the company’s website.

“I think it has a wonderful artistic value … this time that we’re dealing with in civilization, the message of having a divine purpose and returning to our Creator is that I think we need more of, not less of,” said Mr. Lucas, “People need hope and need something to be inspired towards, and this is something that offers that.”

Mr. Lucas was very impressed with the ability of Shen Yun’s Artistic Director to incorporate a wide range of experienced emotions from the “trials and tribulation” in some of the mini-dramas to the “comedic” and “hopeful” parts.

“It expanded the entire spectrum of human emotions very well, because we’re all human and we all experience emotions—whether positive or negative. But we’re able to find the value of it through the hopeful message that is there,” he said.

“The Art Director did a very good job of blending it together to a final end with the last act, that kind of brought the overall message of hope together for us to find within.”