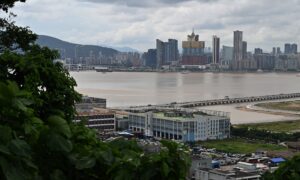 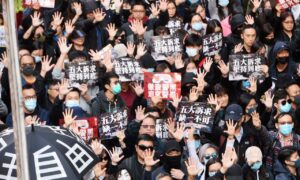 800,000 Hongkongers Take to the Streets to Mark Human Rights Day
0 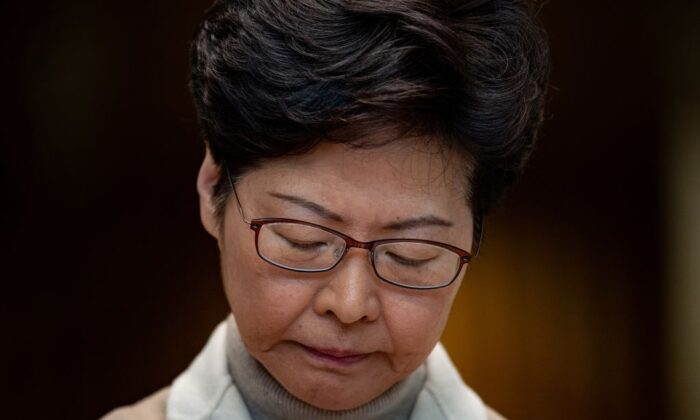 On Dec. 8, local pro-democracy activist group Civil Human Rights Front (CHRF) organized another march urging the city government to realize their five demands, which include universal suffrage and an independent inquiry into instances of police violence.

The group declared that Hong Kong is at the “tipping point” and facing a “humanitarian crisis.”

During the press conference, a reporter asked Lam, “After the huge election turnout and protests on Sunday, will you admit that there is no silent majority behind you?”

Lam didn’t answer the question directly, avoiding comment on whether her pro-Beijing government or the pro-democracy movement hold greater support from the public. Chinese officials and state-run media have repeatedly carried statements claiming that a “silent majority” of Hongkongers don’t support the ongoing protests.

More than 2.94 million of the 4.12 million Hongkongers eligible to vote cast their ballots in the city’s local district council elections on Nov. 24. The pro-Beijing camp lost more than 200 of the 452 district seats, handing the pro-democracy camp a landslide victory.

Instead of answering the reporter’s question, Lam stated the fact that the police had given approval to the march on Dec. 8 was a reflection that the city government was “upholding all the rights and freedom of Hong Kong people.” She denounced “accusations” that her government is eroding people’s freedom, calling them “unsubstantiated.”

Lam went on to repeat her view that her government had already responded to protesters’ demands by withdrawing a controversial extradition bill. That legislation, which many feared would erode the city’s judicial independence, sparked the current mass protests that started in June.

As for demands that might “deviate from the law,” “fail to uphold the rule of law,” or “do things actually beyond the power of the chief executive,” Lam said, “I could not agree to accept those demands, simply for the purpose of meeting people’s aspiration.”

Hong Kong student activist Joey Siu in a recent interview with The Epoch Times’ American Thought Leaders program said the fight for human rights and democracy in Hong Kong is more about standing up against the Chinese Communist Party (CCP) because the Hong Kong government is just its puppet to be manipulated.

Lam denounced unnamed local politicians for reaching out to foreign governments and requesting that they sanction or take other action against Hong Kong.

Hong Kong protesters have held two rallies to thank the U.S. government after U.S. President Donald Trump signed into law the Hong Kong Human Rights and Democracy Act on Nov. 27. A part of the law allows the president to impose sanctions on Hong Kong and Chinese officials in the United States for the human rights violations they committed in the city.

Nowadays, U.S. flags are a regular sight at marches and rallies in Hong Kong.

Also during the press conference, Lam said she will depart Hong Kong for Beijing on Dec. 14 for her regular duty visit to Beijing to report on what has happened in the city over the past year, as well as outline what the government wants to do in the coming year.

When asked whether there would be any discussion on Article 23 in Beijing, Lam didn’t answer.

Article 23, an anti-subversion law that many feared would impinge on civil liberties, was scrapped following a mass protest in 2003. Though some pro-Beijing officials in Hong Kong have vouched for the bill to be reintroduced, it hasn’t yet happened.

During the press conference, Lam also said that a teacher and several students were arrested Dec. 9 on the charge of trying to set up roadblocks in Sheung Shui.

She said she has ordered Kevin Yeung, Hong Kong’s education secretary, to “seriously follow up” on cases of school teachers having either been arrested or involved in “violence.”

On Dec. 9, Hong Kong police announced that they have made 6,022 arrests since June of Hongkongers aged between 11 and 84 on charges such as unlawful assembly and rioting. Of those arrested, 2,393 were students.

The Hong Kong Public Opinion Research Institute, in its latest survey of 1,014 people from Nov. 28 to Dec. 3, showed that Lam’s ratings dropped to 19.7 points, down from 44.7 points at the end of May.