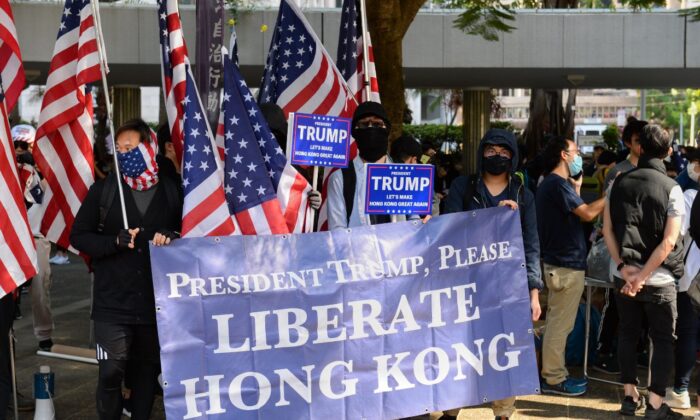 American flags were flying high on polls while Hongkongers sung to the U.S. national anthem around noon on Dec. 1.

Hundreds of protesters gathered at Charter Garden in the heart of Hong Kong’s business district before together they marched to the U.S. consulate at around 1:50 p.m. local time.

Thanks to #usa rally in #HongKong pic.twitter.com/FUs0n50BG0

The rally, held with the theme of “Thank You America for Protecting Hong Kong,” was organized by the local social group Hong Kong Autonomy Action.

The event marked the second time that Hongkongers have held a public event to show their appreciation to the U.S. government.

One of the bills, the Hong Kong Human Rights and Democracy Act, requires the U.S. Secretary of State to annually review whether the former British colony is “sufficiently autonomous” from mainland China to justify its special economic privileges granted under the United States-Hong Kong Policy Act of 1992.

Organizers at the rally stated that U.S. officials would not have so quickly passed the bills if they had not felt Hongkongers’ passion for democracy and freedom. They spoke of their appreciation to all of the U.S. lawmakers who had assisted in passing the bills and Trump for signing.

Joshua Wong, activist and the iconic figure from the 2014 Umbrella Movement, said at the rally that the next step in protecting Hong Kong was calling on the United Kingdom and other Western countries to follow what the United States has done, in an effort to get more global support for the local democracy movement.

At the rally and the ensuing march, protesters could be heard shouting, “Fight for Freedom, Stand with Hong Kong,” and “Resist Beijing, Liberate Hong Kong.”

One protester told The Epoch Times that he would like to thank President Trump for helping Hongkongers’ fight for freedom.

“If China or Hong Kong doesn’t answer our five demands, we won’t give up,” he said, referring to protesters’ demands for universal suffrage and an independent commission to investigate instances of police violence against protesters since June.

Another female protester thanked President Trump for his support and then went on to voice her displeasure with the regime in Beijing.

“CCP [Chinese Communist Party] and communism is cancer on Earth,” she said.

Thanks to America rally in Hong Kong. pic.twitter.com/kgzfvA6wWG

Outside the U.S. consulate, a protester dressed in a suit with a full-face Trump mask accepted a petition letter from the protesters. Organizers explained that they were not able to hand the letter directly to someone at the consulate because of police arrangements.

Protesters then marched from the U.S. consulate back to Charter Garden.

Hong Kong bureau of the Epoch Times contributed to the article.