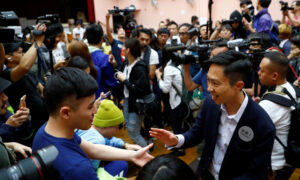 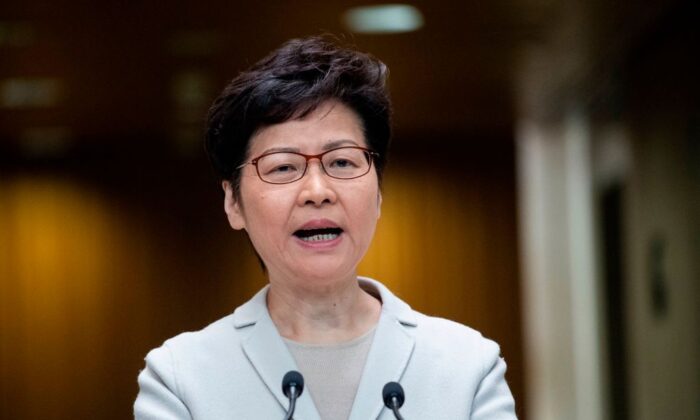 Lam was asked twice about the protesters’ demands in light of the election results.

One reporter asked Lam if she would “reconsider” some of the protesters’ demands. Lam responded by saying that she had answered that with a written statement a day earlier, which stated that she “will listen to the opinions of members of the public humbly and seriously reflect.”

UK Foreign Secretary Dominic Rabb, in a statement on Nov. 25, stated that it was “reassuring to hear Carrie Lam commit to reflect seriously on the message delivered by the people of Hong Kong.”

When another reporter asked whether she would give some concessions to protesters, Lam responded by saying that she had announced the formal withdrawal of the controversial extradition bill, which sparked the current protests, back on Sept. 4.

Since then, Lam has repeatedly said that she is reaching out to the community through her community dialogues and is restricted to this format because of recent violence.

In Hong Kong, protests are set to continue despite the election results.

Civil Human Rights Front (CHRF), the main organizer behind many massive marches and rallies since June, issued a statement following the election results, saying: “Hongkongers, the protests have not ended. District elections are a small victory. Don’t forget that we are still in a humanitarian crisis and we should remember that our movement is more than just elections.”

It reiterated protesters’ demands including universal suffrage and an independent inquiry into allegations of police brutality.

On Nov. 24, more than 2.94 million Hongkongers cast their votes for candidates of the district council elections—a record turnout rate of 71.2 percent. Pro-democracy candidates won 388 out of 452 district seats, as the pro-Beijing camp lost more than 200 seats to pick up 59 seats.

Lam said she would not give an interpretation when asked about some analysis showing that the elections were a de facto referendum on her government.

On Nov. 25, U.S. Sen. Rick Scott (R-Fla.) tweeted that the people of Hong Kong “spoke loud and clear” with the elections.

“Hong Kong’s desire for human rights and autonomy won a resounding victory. There is a lot more work to do, but hopefully Beijing got the message that their aggression will not be tolerated,” Scott wrote.

Chinese state-run media have been very quiet following the elections.

So far, Lam has not publicly taken any blame for the election defeat.

Also during the press conference, Lam might have inadvertently undermined a longstanding statement by Chinese officials and state-run media, about how a“silent majority” of Hongkongers did not support the ongoing protests.

“Is it not time now, six months in, to probably engage rather than just say there is a silent majority which clearly doesn’t exist?” a reporter asked.

“I did not refer to a silent majority,” Lam said, adding, “I did confess this particular election has clearly reflected many voters wanted to express their opinions and views to the government, to myself.”

On June 13, China’s ambassador to the United Kingdom, Liu Xiaoming, told BBC that it had forgotten about Hong Kong’s “silent majority,” referring to Hongkongers who did not join over 1 million people who took to the streets in Hong Kong on June 9.

“The problem of your media is you only focus on the people in the street. You forget the silent majority,” Liu told BBC, according to a transcript from China’s Ministry of Foreign Affairs.

Since then, Chinese state-run media have repeatedly used the phrase “silent majority” to rebuke the Hong Kong protests.

On Aug. 17, China’s state-run media Global Times reported that “the silent majority” has had enough of the weeks of protests in Hong Kong.

On Nov. 11, China’s state-run Xinhua ran a story about some locals in Hong Kong signing a petition against violence. It quoted a netizen named “KW” who expressed hope that there would be more activities in Hong Kong to support the police so that “the silent majority can speak out.”

In the press conference, Lam said she had not been asked by Beijing to seek “accountability” over the election results.

She added that the elections were fair, and held in accordance with the rule of law.

According to China’s Foreign Ministry, Zheng said the United States was “interfering with its internal affairs.”

The U.S. bill, which would make Hong Kong’s special trade status with the United States contingent upon the city’s sufficient autonomy from China, now awaits the U.S. president’s signature to become law.

Democracy Party lawmaker Andrew Wan criticized Lam after her press conference for “burying her head in the sand” by refusing to answer protesters’ demands, according to Hong Kong media.

He urged that Lam, security secretary John Lee, and justice secretary Teresa Cheng step down to help resolve the crisis.