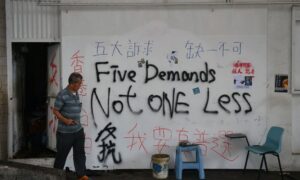 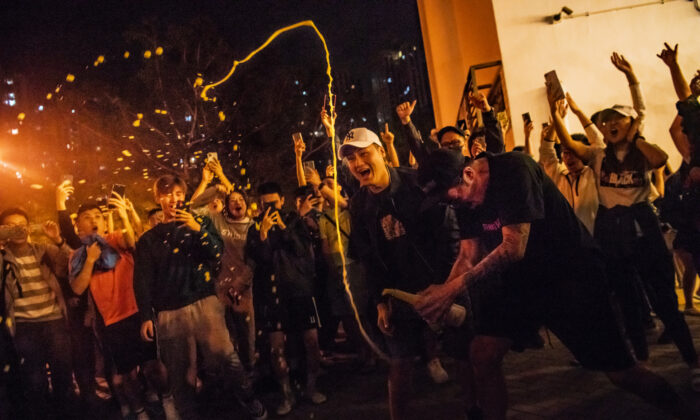 Democratic candidates secured more than 380 district council seats out of the 452 seats up for grabs, a gain of more than 260 seats from the previous elections in 2015. Meanwhile, the pro-establishment camp suffered a major defeat, picking up 59 seats, a loss of more than 230 seats.

With the victory, the pro-democracy camp won 17 out of the 18 districts.

The elections, which have been billed as a de facto referendum on the pro-Beijing government headed by Carrie Lam, also saw a record turnout—more than 2.94 million cast their votes, a turnout rate of 71.2 percent.

Civil Human Rights Front (CHRF), the main organizer behind many massive marches and rallies since June, issued a statement following the elections, saying, “Hongkongers, the protests have not ended. District elections are a small victory. Don’t forget that we are still in a humanitarian crisis and we should remember that our movement is more than just elections.”

CHRF reiterated the calls for the city government to answer to protesters’ five demands, including universal suffrage and an independent inquiry over instances of police violence. It also called on the government to disband the police.

It called for a rally under the theme of “returning power to the people” on Dec. 8.

Wu Chi-wai, chairman of the Democracy Party, said on Nov. 25 that his party’s ultimate goal was to bring about political reform to the city, and the election victory was just a step along the long road of the local democracy movement.

Alan Leong, chairman of the pro-democracy Civic Party, asked Lam, her cabinet, and members of the Executive Council to step down in light of the election results.

Almost 3 million people voted. The opposition is winning 388 seats vs. 59 for the gov’t (w/ a few more counting). Every way you look at it, this is historic. As our city plummets from being semi-autonomous to semi-authoritarian, we react by showing what’s DEMOCRACY IN ACTION.

Following the elections, many netizens took to Lam’s Facebook page to write “five demands, not one less.”

One netizen wrote: “Do you really hear [what] the people say? Look at the election results!”

China’s Foreign Minister Wang Yi, who is currently in Japan, responded to a media question about the election results, and said that Hong Kong would always be a part of China regardless of what happened, according to Hong Kong media.

Hu Xijin, editor-in-chief of China’s state-run media Global Times, criticized “Western forces” for supporting the pro-democracy camp, and said that that Hong Kong’s “land and sky will forever be China’s,” when writing on his personal Weibo account.

Hong Kong’s elections results were also closely followed outside of the city.

U.S. Sen. Marco Rubio (R-Fla.) tweeted: “The results speak for themselves: the people of Hong Kong want a voice in their future. The city’s next generation of democracy should inspire us all to be engaged.”

Washington-based nonprofit Hong Kong Democracy Council (HKDC) took to its Twitter account and wrote: “The people of #HongKong have spoken—If you abandon #HongKongers and our struggle for democracy, we will abandon you in the ballot box.”

In Taiwan, Ernesto Yun-kung Ting, spokesperson for Taiwan’s presidential office, urged Beijing and the Hong Kong government to “accept the will of the people,” according to a statement from the office.

Ting urged the Chinese and Hong Kong authorities to “fulfill their solemn commitment to Hong Kong’s freedom and democracy.”