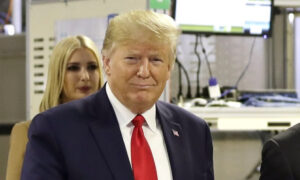 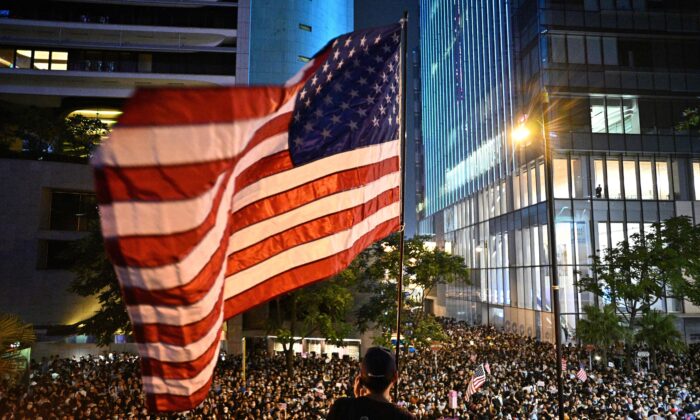 A man waves a US national flag as protesters attend a rally in Hong Kong on Oct. 14, 2019. (Anthony Wallace/AFP via Getty Images)
Politics

Voices From Hong Kong: the US Bill is Our Hope to Fight Against Authoritarianism

Hongkongers said that the human rights bill that recently passed through the U.S. Congress is their hope for safeguarding their city against mounting communist influence from the Chinese regime.

The Hong Kong Human Rights and Democracy Act passed through the House 417-to-1, and unanimously passed through the Senate the day prior. The bill, which would make Hong Kong’s special trade status contingent upon sufficient autonomy from mainland China, serves as a stark warning to Chinese authorities not to crack down on ongoing demonstrations, according to U.S. lawmakers. The territory reverted from British to Chinese rule in 1997 under the express guarantee that its autonomy and freedoms be preserved.

The bill now needs the president’s signature to become law.

President Donald Trump said on Nov. 22 that his support for Hong Kong is the reason that Beijing has not launched a military crackdown.

“I will say this, if it weren’t for me, thousands of people would have been killed in Hong Kong right now, and you wouldn’t have any riots, you’d have a police state,” Trump told Fox & Friends in an interview.

But he stopped short of saying definitively whether he would sign the bill into law.

“He’s [Xi] got a million soldiers standing outside of Hong Kong … The only reason he is not going in is because I’m saying it’s going to affect our trade deal,” Trump said.

“If it weren’t for me, Hong Kong would have been obliterated in 14 minutes,” Trump added.

Asked by Fox anchors whether he would veto the bill, Trump said, “We have to stand with Hong Kong, but I’m also standing with President Xi, he’s a friend of mine,” he said.

Tensions in Hong Kong have continued to escalate since June, when mass demonstrations began against perceived Chinese Communist Party encroachment on local affairs. Police have fired over 10,000 rounds of tear gas since June and critically injured at least three protesters with live rounds.

Some protesters remain stranded at the Polytechnic University campus, where police have laid siege since Saturday. Hundreds were trapped inside, though many have escaped or surrendered themselves to police arrest in the past few days.

Those inside waved American flags upon hearing the news of the U.S. bill passage on Nov. 20.

Among them was Cheng Hei, who expressed hope that the U.S. administration could impose sanctions on Hong Kong officials, who he said were acting as aides for the Chinese regime to chip away at Hong Kong’s freedom.

“There’s no turning back in this battle. If we turn back, we will have to pay for the consequences. Everyone will,” he told The Epoch Times on Nov. 20.

Like several of his companions, Cheng said he had written a will, preparing to lose his life while protesting on the streets. “When you think you are doing something right, there are no regrets,” he said.

Dozens who walked out of the campus on Nov. 19 had symptoms of hypothermia. On Nov. 21, protesters remaining inside arranged items into a giant “SOS,” calling for outside help.

Hong Kong protesters have consistently appealed to the U.S. administration to show support for their cause. In past rallies, they waved American flags and banners with pro-U.S. messages signaling their hope for greater democracy.

“We want the U.S. administration to help protect human rights in Hong Kong,” a 26-year-old finance worker Cherry told Reuters, as protesters marched toward the nearby U.S. Consulate on Sept. 8.

“With the U.S. locked in a trade war with China at this point in time, it’s a good opportunity for us to show [the United States] how the pro-China groups are also violating human rights in Hong Kong and allowing police brutality,” she said.

On Sept. 8, Hongkongers again held a prayer meeting at Chater Garden in the Central business district as well as a rally at the U.S. consulate, urging for the bill to be passed.

“The international attention right now is very important to Hong Kong,” protester surnamed Lam told The Epoch Times. “Because of this attention, Hong Kong has not sunk into a stage where all citizens are persecuted, like in other places of China,” he said.

“The only way Hong Kong can withstand communist control is through help from the United States,” another protester, Ho, told The Epoch Times.

Activist and pro-democracy icon Joshua Wong on Nov. 20 called on the U.S. president to sign the bill into law “as soon as possible.”

“Human right[s] should never be overrid[den] by the trade deal,” he said.