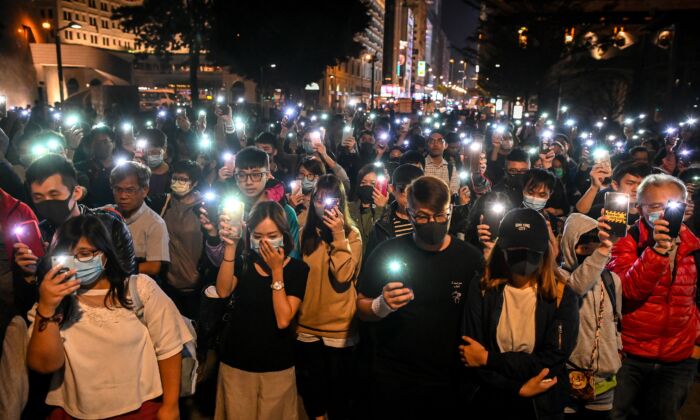 People hold their mobile phones as they gather to pray for the students who are barricaded inside Hong Kong Polytechnic University campus at Salisbury garden in Tsim Sha Tsui district of Hong Kong on Nov. 19, 2019. (YE AUNG THU/AFP via Getty Images)
HK Current Affairs

The Hong Kong Human Rights and Democracy Act, introduced by Sen. Marco Rubio (R-Fla.) in June, would require that the U.S. Secretary of State assess annually whether Hong Kong is sufficiently autonomous from mainland China to warrant the special trade privileges currently afforded to it.

“The people of Hong Kong see what’s coming; they see the steady effort to erode the autonomy and their freedoms,” said Rubio on the Senate floor on the evening of Nov. 19. “And the response by the Hong Kong authorities, under tremendous pressure from Beijing, is violence and oppression.”

Since the territory reverted from British to Chinese rule in 1997, under the express guarantee that its autonomy be preserved, the United States has treated it as a separate entity from mainland China in matters of trade, investment, and visas. For example, Hong Kong doesn’t face the tariffs that the United States is imposing on Chinese imports.

Hongkongers have been taking to the streets since June in opposition to perceived Chinese hampering of the city’s freedom and autonomy.

“It’s important that the world knows clearly … the nature of the Chinese Communist Party and who they are at a time when they are trying to go around the world portraying themselves as a benevolent power,” Rubio told The Epoch Times’ sister media NTD after the bill’s passage.

He also encouraged young protesters in Hong Kong not to give up their fight and continue to raise their voices. “History will judge them kindly,” he said.

U.S. lawmakers initiated the legislation as the Hong Kong government was seeking to pass a since-withdrawn bill that would have allowed the Chinese regime to seek extradition of individuals from Hong Kong.

The U.S. bill is widely seen by Hong Kong protesters as a form of economic pressure for the Hong Kong government and Chinese regime, which relies on the financial hub as a source of foreign reserves and investment capital.

The House version of the bill passed unanimously on Oct. 15. The bill still needs the president’s approval before it becomes law.

The legislation would also enact U.S. sanctions on foreign officials for any gross violations of international human rights standards, such as arbitrary detention, torture, or coerced confessions of individuals in Hong Kong.

It further specifies that visa applicants from Hong Kong who wish to study or work in the United States should not face discrimination due to “politically motivated arrest, detention, or other adverse government action.”

On the Senate floor, Sen. Ben Cardin (D-Md.) said that protection should be given to “peaceful protesters who are asking nothing more than to exercise their rights that they were told would be protected, to express their views, and to have democracy in Hong Kong.”

Seven additional senators signed on as co-sponsors of the bill the previous day, increasing the number to 49 as the city saw the worst violence since mass protests began. Police besieged the Polytechnic University (PolyU) campus, where hundreds of protesters have been trapped since the weekend.

This article previously misstated the date of the police briefing. The Epoch Times regrets the error.