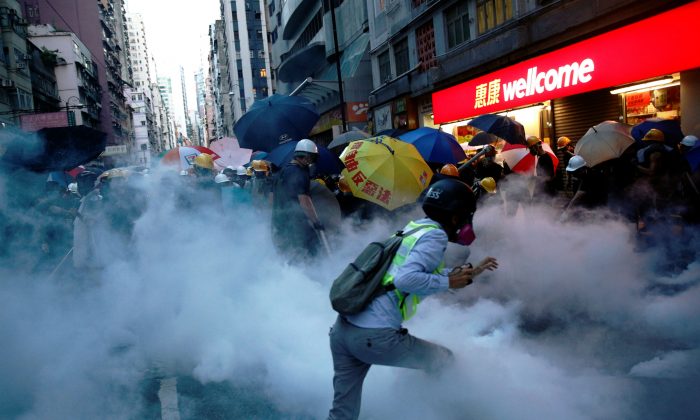 Two U.S. lawmakers have joined international calls to suspend exports of crowd control equipment including tear gas to Hong Kong, where police have been accused of using excessive force to quell ongoing protests against Beijing’s tightening grip on the city.

Protests over a controversial extradition bill have escalated in recent weeks, compounded by public anger following the police’s delayed response to a violent mob attack inside a metro station on July 21.

Over the past weekend, clashes between protesters and police again resulted in injuries, as officers cleared crowds by firing tear gas, rubber bullets, and sponge grenades.

Rights groups, the Hong Kong Journalists Association, and protesters have repeatedly condemned the police’s crowd-control tactics. Footage circulating online include police hitting unarmed bystanders and journalists with batons and shields, and beating already-subdued protesters. One officer was recently caught on video aiming a shotgun at a crowd of protesters.

Rep. Jim McGovern (D-Mass.) in a tweet on July 29 said “unnecessary” police violence was escalating the situation in Hong Kong.

“The U.S. should immediately suspend any transfers of police products including tear gas to #HongKong until adequate safeguards are in place,” McGovern wrote.

Escalating & unnecessary violence by #HongKong police worsens the situation. The U.S. should immediately suspend any transfers of police products including tear gas to #HongKong until adequate safeguards are in place. https://t.co/NH8vmriBbV

Sen. Ted Cruz (R-Texas) also in a tweet on July 29 said the United States should consider such a ban, similar to what it did after the Chinese regime’s violent crackdown on student protesters in the 1989 Tiananmen Square Massacre.

The United Kingdom in late June said it would stop issuing export licenses for crowd control equipment to Hong Kong until “concerns raised on human rights” are addressed.

HK Riot Police fired bullet & tear gas directly at persons and indoor that made in US. I am calling US Gov for the suspension of crowd control equipment exports to HK, prevent human rights abuses.

Wong also included a link to the White House petition he created in early July, which seeks a halt to U.S. exports of police crowd control equipment to Hong Kong. As of July 31, the petition has over 65,000 signatures. 100,000 are needed by Aug. 4 for the White House to respond, according to the petition website rules.

The activist, who was a leading figure during the city’s mass democracy protests in 2014, told The Epoch Times in a phone interview that the United States should follow Britain’s lead in issuing an export ban.

“[The police] have turned the protest zone into a … battlefield,” Wong said. “They attack people instead of really trying to clear the protests,” Wong said.

Given that the United States has shown the strongest support for Hong Kong protests, there was no reason for it to continue selling weapons to riot police, he added.

Wong, who also leads the pro-democracy political party Demosisto, tweeted a statement by the group on Aug. 1, which said Hong Kong police were abusing the crowd control weapons, including by deploying sponge grenades at close range targeting protesters’ heads.

“It causes traumatic bleeding and their helmets blown off yards away,” the statement read.

None of the companies responded to requests for comment.

The U.S. Commerce Department, in an emailed statement, said the export of crowd control equipment to Hong Kong require a license from the department, and that it consults with the State and Defense Departments in reviewing license applications.

“When licenses are issued, the [Commerce] Department remains committed to strictly enforcing those licenses,” it read.

The U.S. State Department did not respond to a request for comment.

Francisco Bencosme, Asia Pacific Advocacy Manager at Amnesty International USA told The Epoch Times that if the United States has issued export licenses to these companies after being made aware of allegations of police aggression, then it may have been complicit in the abuses.

“This sends absolutely the wrong message on behalf of the United States,” he said.