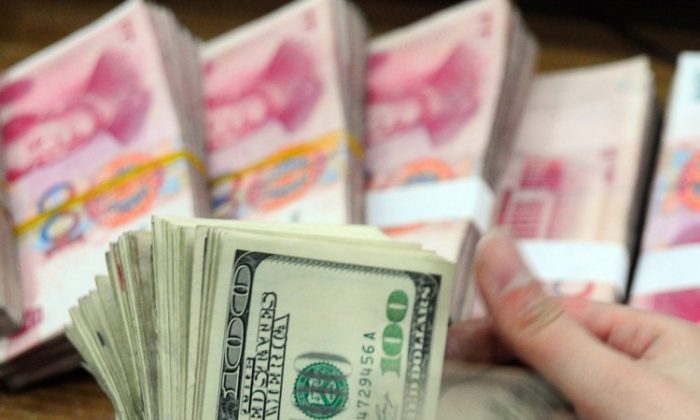 A Chinese bank worker counts a stack of U.S. dollars together with stacks of 100 Chinese yuan notes. China is driving up its national debt to finance its foreign currency reserves, the largest in the world. (STR/AFP/Getty Images)
China Business & Economy

A prominent Chinese economist recently revealed that out of China’s total foreign reserves, only a few hundred billion dollars are freely usable. He warned that deploying Chinese troops to Hong Kong will bring disastrous consequences to China’s economy, because Hong Kong is a major source of China’s foreign reserves.

Wei Jie, an economist and professor at the School of Economics and Management at Tsinghua University, gave a speech at a summit forum on business management in Beijing on Oct. 25 to discuss future economic policies. As the former director at the research institute of the State-owned Assets Supervision and Administration Commission (SASAC), he is regarded as one of the think tanks for Chinese leaders.

Wei said that China will be facing various economic risks next year, most notably a debt crisis, because debt maturity will peak next year.

The International Institute of Finance estimates that China’s total debt— corporate, household and government—exceeded 300 percent of its GDP in the first quarter of 2019.

In his speech, Wei said he would like to propose a slogan for the upcoming year: “Strive to survive, for there is hope and a future as long as we survive,” implying that China’s economy is now in a deep crisis.

When speaking of stabilizing the currency exchange rate, Wei said one of the prerequisites is to stabilize foreign reserves. According to his estimate, China only has a few hundred billion dollars in foreign reserves that can be used.

“Any fluctuation in the supply of foreign reserves will inevitably affect China’s domestic currency, and affect the domestic supply of funds,” Wei said.

He further explained that there are three main sources of foreign reserves—one is the money earned, the second is borrowed money, and the third is foreign investment.

Among the Chinese regime’s top leaders, some insisted on deploying the military to Hong Kong. But Wei said military intervention must be avoided by all means, precisely because it will have a big impact on Hong Kong’s financial market and as a result cause huge problems for China’s foreign reserve supply. He also said that it is impossible for any mainland city, such as Shenzhen or Shanghai, to replace the role of Hong Kong in the near future.