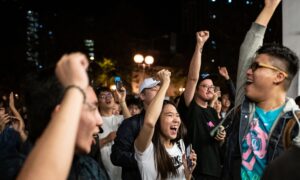 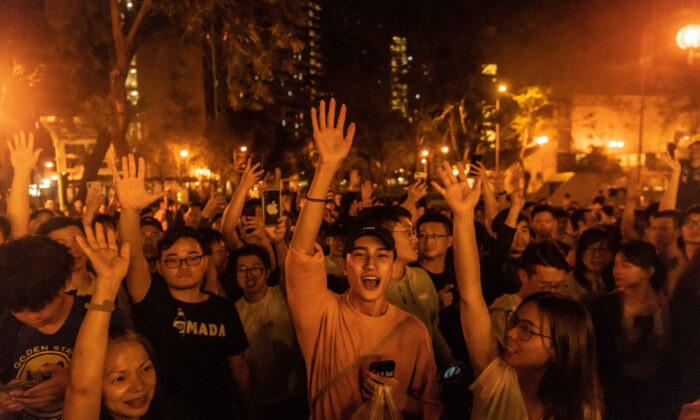 After Hong Kong’s pro-democracy camp scored a landslide victory in the city’s district elections on Nov. 25, Chinese state media have largely kept silent, omitting news of the result in its reports.

The mainland media response stood in sharp contrast to its heavy propaganda campaign in the lead up to the elections, warning Hongkongers against voting in support of pro-democracy groups.

The city’s residents turned out in record numbers on Nov. 24 to hand pro-democracy parties a resounding victory in the district council elections. Democratic candidates won 388 out of 452 district seats, with over 260 seats swinging to the pro-democracy camp.

More than 2.94 million Hongkongers voted, amounting to a record turnout rate of 71.23 percent, resulting in hours-long queues from the polling station extending for blocks. The vote was widely seen as a referendum on the ongoing protest movement against Chinese encroachment into the city.

The city’s leader Carrie Lam, who has refused to fully accede to demonstrators’ demands during almost six months of pro-democracy protests, said that the government will “listen to the opinions of members of the public humbly and seriously reflect.”

Since June, protesters have made several demands, including for universal suffrage and an independent inquiry into alleged police brutality against protesters.

After the election, some Chinese netizens pointed out the difference between results and what had been portrayed by the Chinese propaganda machine.

“What a slap on the face, the Hong Kong’s ‘silent majority’ in 2019 has become the biggest joke,” a user wrote on Weibo, China’s Twitter-like platform, referring to the term frequently used by state-run media to portray protesters as a small percentage of the population.

“Who is the majority and who is the minority is already too clear,” another commented.

News of the election results were not reported by Chinese media outlets, which limited their coverage of the event.

State-run outlet Xinhua reported on the election’s conclusion on Nov. 25, which was later republished on multiple other major Chinese media outlets, including Global Times, Sina, and People’s Daily.

The report, filed from Hong Kong, omitted news of the results, noting only when the election opened and closed, and that councilors from 18 districts have “all emerged.”

It added that the “strained societal sentiment” had “seriously interfered with the election proceedings.”

“Resuming order is still the most pressing task for Hong Kong,” it stated.

Around midnight the same day, both Xinhua and state-run China Daily carried an article lambasting the United States for passing a Hong Kong human rights bill days prior in support of the city’s demonstrators.

China Daily in several reports on Nov. 25 and Nov. 26 chose to focus on the reactions from Hong Kong and Chinese officials to the election without going into the poll numbers.

Hu Xijin, editor of the hawkish state-run newspaper Global Times, said in a Nov. 25 video that they “must encourage the pro-establishment party not to lose heart.” The newspaper in an editorial on Nov. 25 also claimed that the district elections had taken place in an “abnormal” atmosphere, adding that the elections were localized and thus have limited political influence.

The editorial said that regardless of the election results, they were simply elections “under the rule of the People’s Republic of China, adding that “the land and sky of Hong Kong will forever belong to China.”

In the lead up to the election, Chinese state media was focused on drumming up rhetoric against Hong Kong democracy supporters.

State broadcaster CCTV on Nov. 23 called on people to “use vote to curb violence,” warning that Hongkongers would “taste their own medicine” if they “cast the wrong vote” by supporting the pro-democracy party.

“The citizens can save Hong Kong, the silent majority must hit back,” the editorial stated.

Another editorial on Xinhua similarly accused pro-democracy candidates of “confusing black and white” and being “rioters who used intimidation, deception, and kidnapping to fish for ballots.”

Pro-Beijing organizations also attempted to fan public sentiment against the protesters prior to the election. On Nov. 20, seven out of 10 major Hong Kong print media ran front-page ads that described protesters as rioters and urged voters to “oppose rioting.”

The same ad also appeared on the front pages of at least six newspapers on Nov. 12, after the police’s siege of a Hong Kong campus made international headlines.

In an interview after the election on Nov. 24, Hong Kong singer and activist Denise Ho said that Chinese regime’s propaganda campaign against the protesters is “comprehensive and scary.”

“The fake information and smearing campaigns are going on every day,” she told The Epoch Times, adding that with effort and persistence, the truth will eventually prevail.

“We shouldn’t easily allow the fake information cover the unchangeable truth,” she said.